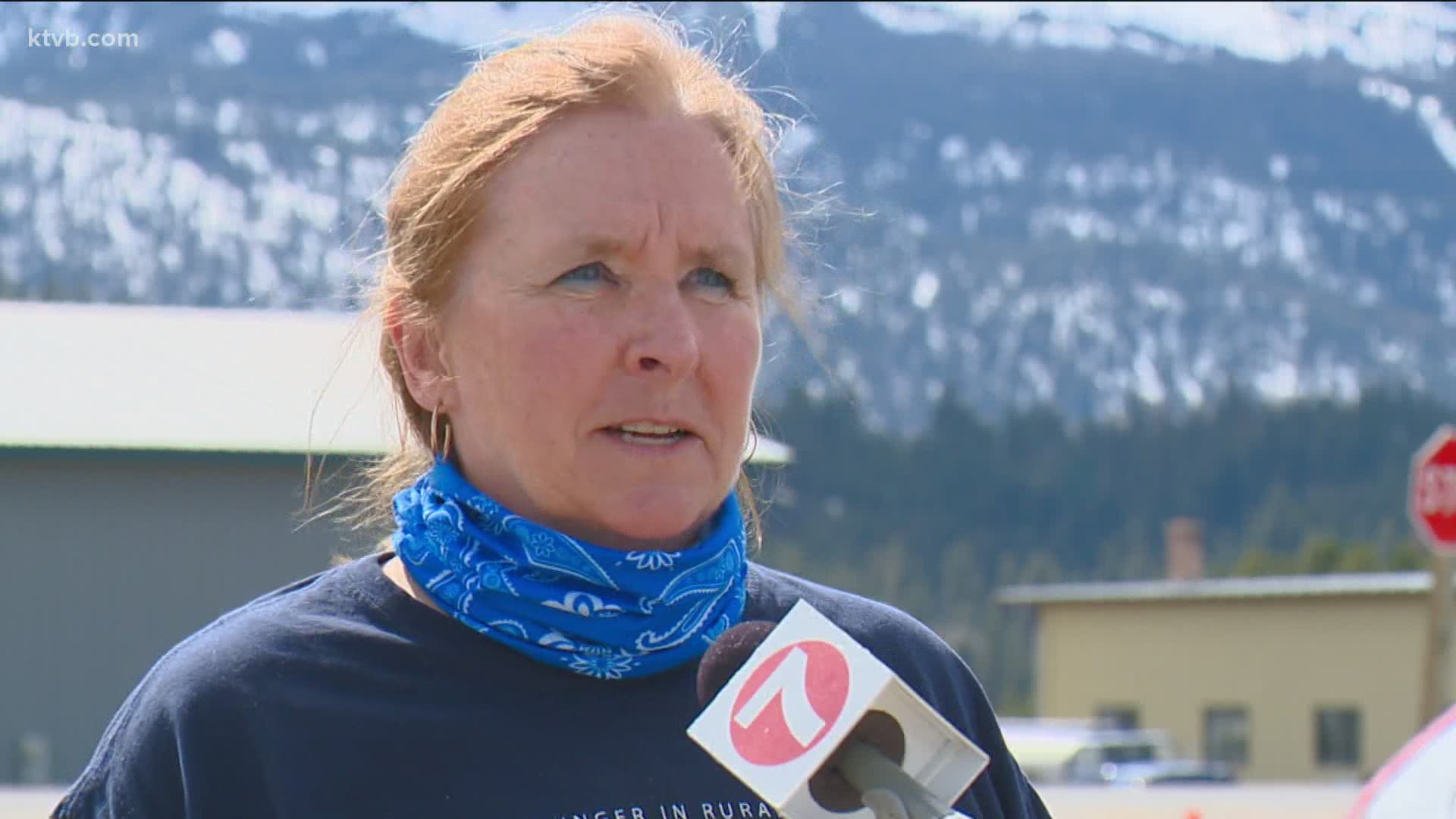 CASCADE, Idaho — Food banks have become more and more important throughout the pandemic, including the Cascade Food Pantry.

Due to the pandemic, they saw an enormous increase in demand and have also changed their operations and how they get the food to the people who need it.

They shifted to a drive-up system, with volunteers giving people a few boxes of food and they go on their way.

“I don’t like that personally because I miss visiting people, it's about people,” Food Pantry President Lori Anderson said.

She preferred their old method of having a choice pantry. People could come in and pick and choose the items they wanted or needed.

With their drive-thru system though, they were serving a lot more families than they were used to. Before the pandemic, they would serve around 120 households.

“When the pandemic hit, employment changed, tourism changed and so the demand went up for the local people that lived here,” Anderson said. “Our biggest day was crazy, we had 173 households that came through here so that was a lot.”

One of those households is Amber Van Buren’s. She’s been coming to the food pantry for a few years now. She noticed the difference this past year.

“I would say the lines are longer definitely and there are more people I’ve noticed have been coming through,” she said. “The community, some of the community does rely on it, its excellent service and fresh food.

With more people coming through to get food, they needed to pick up more food from the Idaho Food Bank in Meridian. The pantry relies on a system of volunteers who drive their pick-up trucks from Cascade into the Treasure Valley and then haul back a trailer filled with food.

Normally the trailer was filled with 4,200 pounds of food, but that increased a lot though when demand went up.

“We are consistently, during our peak, were picking up 7,200 pounds of food because our demand was so high,” Anderson said. “So, they’re getting us more food and it's fresh food, which means it's heavy food.”

This heavy food was putting a lot of stress on the volunteers' cars when they were towing the trailer filled with it through Horseshoe Bend Hill.

“You can imagine if you got a very full trailer behind you,” Anderson said.

So, the pantry is raising funds for a one-ton pick-up truck. They’re looking to raise around $40,000. Once they get a new truck, it’s less likely they leave food behind.

“When you get to a place where your trailer is full of heavy things and you’re looking on the dock and you still haven’t, you have to choose,” Anderson said. “At that point it’s like, we’re taking the milk and leaving the potatoes, so we’ll get the potatoes the next time.”

They want to be able to keep up with the demand for food to help anyone that comes through asking for some.

“There’s usually a lot of fresh produce which is nice,” Erin Marie Hopper said, another customer of the pantry. “Also, there is a lot of healthy stuff for my child so it’s kind of a little mystery box.”

Because the boxes of food are going to those in need and to fight off hunger in Cascade.

“Pretty much everybody that comes through here is our neighbor,” Anderson said. “That makes it really nice.”

The pantry is participating in Idaho Gives and have already raised $13,000. Anderson told KTVB they have a donor willing to match double. So, they are working to raise $20,000 and then the donor can match that.

If you want to donate, you can do so by going to this link or sending it directly to them at Cascade Food Pantry, PO Box 799, Cascade, ID 83611.