If passed, the legislation would make it more challenging to put an initiative - like Medicaid expansion - on the ballot. 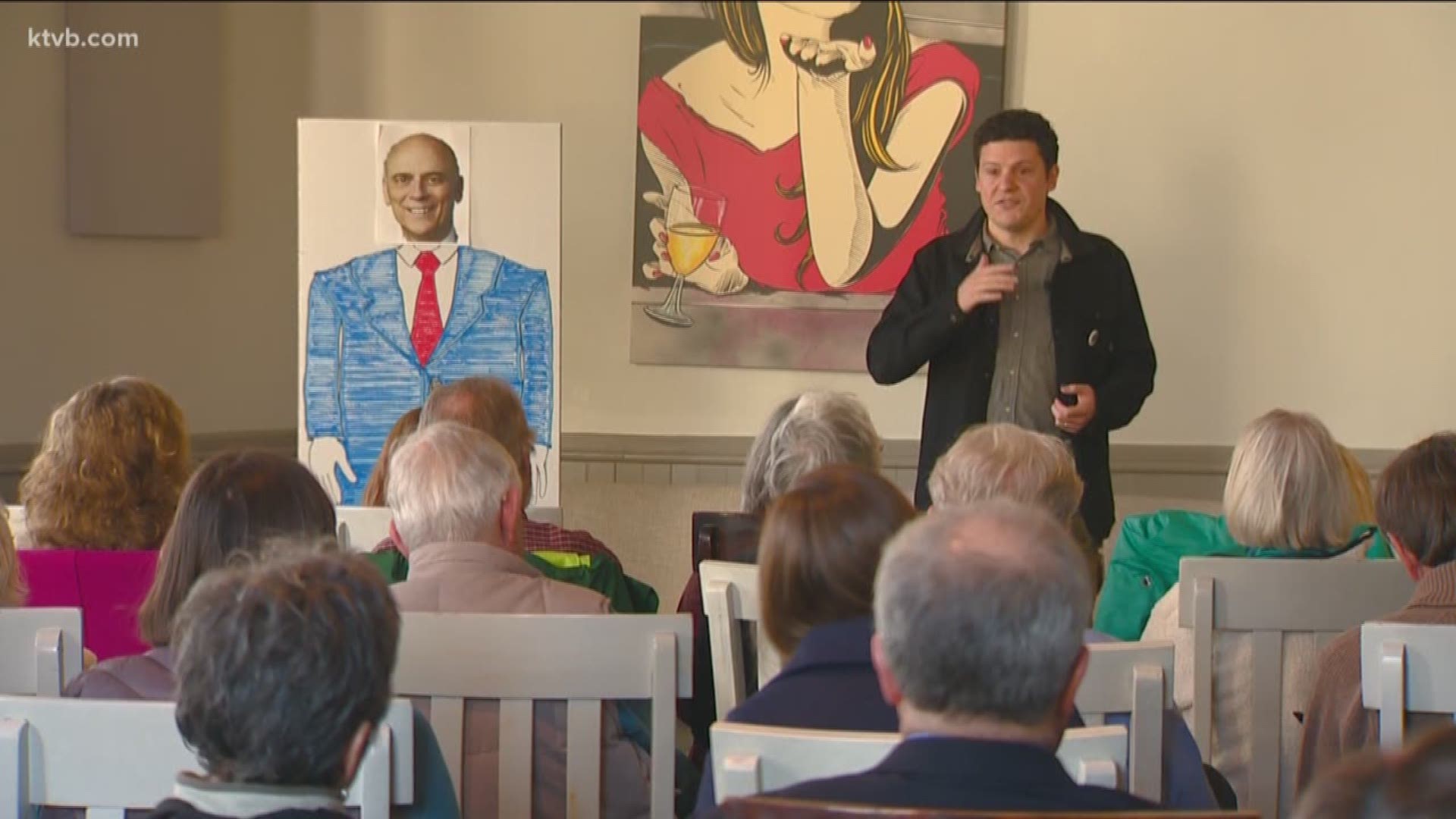 EAGLE, Idaho — Around 80 people showed up to Rembrandt's in Eagle Thursday night for a town hall discussion about Senate Bill 1159 - legislation that aims to tighten ballot initiative requirements for voters.

Senator Scott Grow (R - Eagle) is the bill's sponsor. He was invited to the town hall but didn't show, so Reclaim Idaho and town hall organizers replaced him with a cardboard cutout, reading his statement on the bill.

According to Grow's statement he read before the Senate State Affairs Committee on Monday, he believes restrictions need to be tighter so that Idaho doesn't become like other states that allow dozens of initiatives on the ballot at once.

Reclaim Idaho representatives spoke at the town hall, explaining what the bill means. Reclaim Idaho said it is opposed to the bill.

"We don't believe it should be easy to get initiatives on the ballot," said Luke Mayville, co-founder for Reclaim Idaho. "It should be difficult and in Idaho, it already is."

"Sen. Grow's bill sets out to solve a problem that's already been solved," he continued.

After voters' repeal of the Luna Laws in 2012, which sought to make changes to education in Idaho, the requirements for ballot initiatives were tightened to their current standards. That was in 2013.

Mayville gave some statistics on ballot initiatives. He said since the changes in 2013, under current requirements, 12 initiatives have been attempted and only two have made it on the ballot: Medicaid expansion and horse racing.

It would also adjust the time voters have to do that from 18 months down to 180 days, or six months.

Grow said, especially in this day and age with technology, 180 days is sufficient.

"Definitely it's enough time," he said. "We've studied the initiative process all around the U.S. First, 24 states don't even allow them - and those that do, they range from 180 days, or 6 months, to a year and half.”

Those at the Eagle town hall who oppose the bill disagree. They cite the Prop 2 initiative as an example of how long it can take to complete the ballot initiative process.

“I am a big supporter of our state Constitution and I’m a huge supporter of the fact that it allows us the right to do an initiative," said Janet Buschert, an Eagle resident. "And I believe that Senate Bill 1159 would make it virtually impossible.”

RELATED: Critics of tougher initiative requirement bill pack hearing, have to wait until Friday to continue

Other opponents said Grow's argument that too many things would be on the ballot isn't valid. Some feel it would have the opposite effect and issues that really need to get on the ballot wouldn't have a chance.

“Reclaim Idaho and the work they did – that was one of the most well-organized campaigns in the history of this state," said Blake Gaudet, who lives in Meridian. "And they had to work very hard to get to the number of signatures that is required right now. So making it more difficult – absolutely, many important things aren’t going to be on there if this passes.”

Leroy said the Idaho Constitution does give the power to legislate to both lawmakers and the people.

“The power to legislate in Idaho, under the Idaho Constitution, is a shared power," he said. "The legislature obviously has it under the articles of the Constitution, but so also does the first section on the legislature, give the people either the right to initiate or retract legislation.”

He said the question in this case is how to balance that power to legislate.

Jeffrey Lyons, an assistant professor in the political science department at Boise State, agrees it's a balancing act of the power to legislate.

“There’s a number of states that for a variety of reasons, the legislatures don’t want to take action on certain issues,” he said.

According to Lyons, that's especially true in a state like Idaho where the Legislature only works a few months out of the year. He said certain issues they may just not have the time to get to.

He added that Prop 2 in Idaho and the legalization of marijuana in other states are good examples of voter initiatives.

Grow said another reason for supporting the bill is that he wants to make sure all of Idaho is involved - and equally represented.

"What's happening right now with these huge areas like Boise, you could have these initiative people just work Treasure Valley from Gem County over to Mountain Home area, and get all the votes that they need to get it on the ballot, which doesn't represent anybody in the rest of Idaho," he said.

Leroy said when it comes to law, there shouldn't ever be a differentiation between rural and urban communities.

“Well, generally speaking, the Constitution, the process of elections aren’t designed, and should not be, making judgments between rural and urban,” he said. "We have been operating under 'one man, one woman, one vote' mantra for awhile, and that’s because it’s designed to give equal influence to each voter."

Many voters are wondering if this bill would actually violate their constitutional rights.

According to Leroy, that is something the courts would decide on - and they could possibly rule it that way.

A federal court case from 2001 that did just that. The case was called, Idaho Coalition United for Bears v. Cenarrusa.

That case dealt with a voter initiative that required six percent of voter signatures in 22 counties. It was ruled unconstitutional because it was considered to have too many technical requirements to comply with voters' rights under the Constitution.

The bill goes before the Senate State Affairs Committee Friday morning at 8 a.m.