Lawmaker wants to take guns away from domestic abusers

The bill would prohibit anyone convicted of misdemeanor domestic violence from possessing a firearm for two years following the conviction. 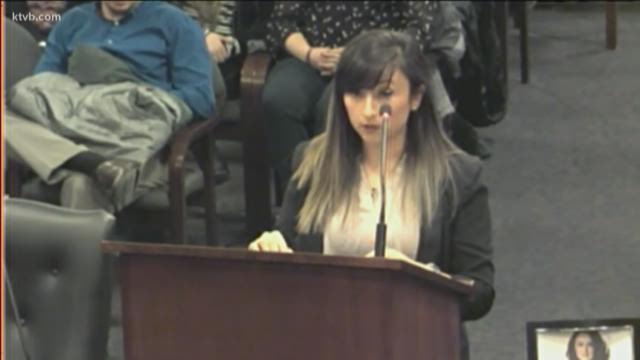 BOISE -Legislation that would beef up the ban on gun ownership by domestic abusers is winning support at the Statehouse.

The new bill, now headed to the House floor, extends that to certain misdemeanor convictions.

House Bill 585 would make possession of firearms a misdemeanor for anyone already convicted of misdemeanor domestic violence for two years following the conviction.

The House Judiciary, Rules, and Administration Committee agreed Thursday to send the bill to the full House for a vote.

The bill is sponsored by Democratic Rep. Melissa Wintrow of Boise who said women are five times more likely to be killed if a gun is present in a domestic violence situation.

“Let’s pull a lethal weapon out of the mix when we are dealing with domestic violence,” Wintrow said.

Wintrow says it was a former student of hers, Laura Diaz, who prompted her to draft HB 585.

“Her mother was murdered by her father two years ago,” Wintrow said.

Diaz testified in front of the House committee Thursday.

“A few years before my mother’s senseless killing he was arrested for having beat my mother and my then 14-year-old sister, and while he did so he brandished a gun, all in the presence of our four-year-old brother,” Diaz said.

Diaz says her father was arrested after this on felony charges, but they were eventually reduced to misdemeanors, allowing for her father's weapons to be returned to him. Diaz says this sealed her mother's fate.

“We cannot continue to fail and if we do, you will have others like myself who will stand before you, sharing their stories like mine, asking you to be on the right side of change that will provide a better future for others who suffer from domestic violence and its consequences,” Diaz said.

HB 585 did eventually pass out of committee Thursday, but Wintrow says she was faced with tough questions, mainly from those concerned that the bill would infringe on Idahoans' Second Amendment rights.

But she says, if passed, this law would only apply to a small percentage of people.

“We admit the vast majority of gun owners are responsible but there’s a certain subset that isn’t responsible, those folks who would abuse a loved one in their home or threaten them with a weapon probably don't deserve to have a firearm, at least for a little while,” Wintrow said.