Rep. Priscilla Giddings, R-White Bird, said the complaints were a ploy by her political rivals to take advantage of "the woke cancel-culture movement." 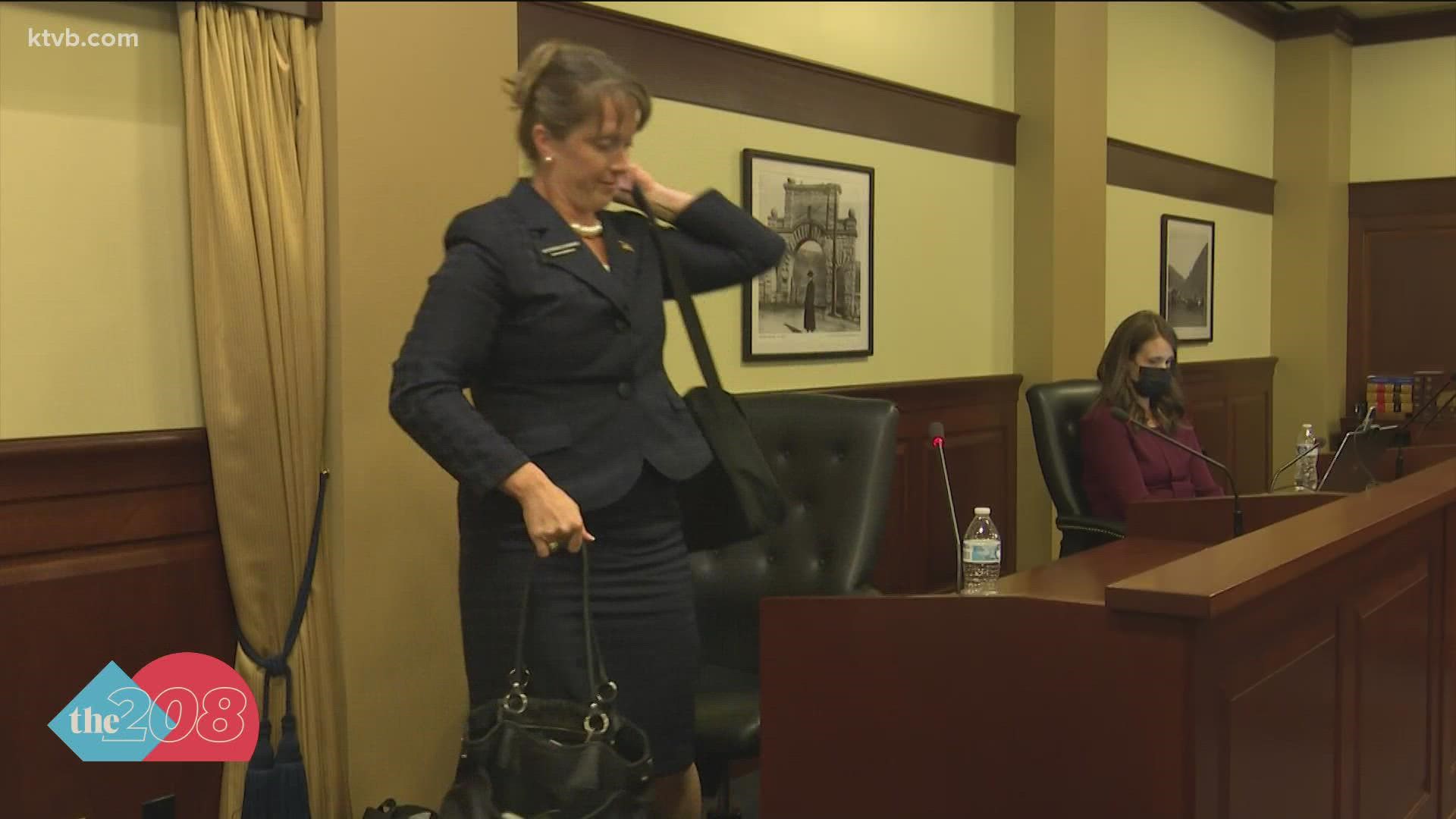 BOISE, Idaho — An Idaho lawmaker who released the name and photo of a teenage intern who reported being raped by another legislator refused to answer multiple questions but maintained that she did nothing wrong during a Monday ethics hearing.

Rep. Priscilla Giddings, a Republican from White Bird, is accused of "conduct unbecoming a Representative which is detrimental to the integrity of the House as a legislative body."  Giddings, who acted as her own counsel in the hearing, called the alleged ethical violations against her "nothing more than crass attempts by my political opponents to take advantage of the woke cancel-culture movement that wants to destroy Idahoans' individual rights for their own personal gain."

The 19-year-old intern, referred to as Jane Doe, told police in March that then-Rep. Aaron von Ehlinger, a Republican from Lewiston, had sexually assaulted her in his Boise apartment after the pair went out to dinner together.

Von Ehlinger argued the sex was consensual, and Giddings appeared to back his account, sharing a blog post to her Facebook page that contained a photo of the intern, her full name, and personal details about her life.

During an April ethics hearing into von Ehlinger's romantic pursuits of the intern and several other women who work at the Idaho Capitol, Giddings at first denied sharing the photo and information about the teenager. She reversed course after a member of the ethics committee pulled up the post on her Facebook page during the hearing, admitting to sharing it but saying she had not "thoroughly examined" what she had posted.

On Monday morning, Giddings repeated that she posted a link to the article that included the teenage intern's name after "skimming through it" and that she had "no knowledge or control" over the photo of the 19-year-old, which was the thumbnail of the article. She declined to say whether she realized Jane Doe's real name was repeated several times throughout the post.

Publicizing Jane Doe's identity drew sharp criticism from Giddings' fellow lawmakers and victims advocates around the state. In a written complaint signed by 25 House members, lawmakers wrote that in addition to lying under oath, Giddings had threatened the safety of the student intern and made it more difficult for future victims of crime or workplace harassment to report what happened to them.

Rep. John Vander Woude, a Republican from Nampa, said he believed Giddings' behavior fell far short of the standards expected of a lawmaker.

"To me, this is conduct unbecoming any member of society," he said.

Rep. Greg Chaney, R-Caldwell, who filed one of the two complaints against Giddings, said that Giddings' post help spread and legitimize the information in the blog post.

"By virtue of her position, and especially by linking it to an official government newsletter, she essentially gave the government's stamp of approval" to what was in the article, he said.

He also argued that publicizing the rape accuser's name does not fall under the umbrella of freedom of speech under the First Amendment. Chaney gave the example that although it would be perfectly allowable under the Constitution for someone to "scream at the top of your lungs and pour a bucket of pig blood over your head," it would be inappropriate for a representative to do so on the House floor during the chaplain's prayer.

"Defamation has never been regarded as protected speech under the First Amendment, and you have several defamatory remarks here," he added.

Boise Democrat Rep. Brooke Green said that the complaint against Giddings was a bipartisan effort, and that no lawmaker who signed it knew who else was signing ahead of time.

Green, who said she immediately recognized the student intern when she saw the photo Giddings shared, told the committee she felt that intentionally posting her name and picture victimized the teenager a second time.

Under questioning by the committee, Giddings gave a series of non-answers, repeatedly insisting that questions posed by ethics committee members and the counsel for the committee were not relevant, that committee members were trying to put words in her mouth, that she did not understand or had not been informed of the allegations against her, that she needed definitions of words like "met," and that the committee had overstepped the bounds of House rules.

The lawmaker also testified that "there is no victim," that Jane Doe could possibly be considered a volunteer rather than an intern, and that interns are not technically employees protected under federal law.

When an openly-aggravated Rep. John Gannon, D-Boise, asked Giddings whether disseminating the name and photo of someone who reported sexual harassment would be acceptable if Jane Doe was indeed a volunteer rather than an intern, Giddings sat in silence for several moments before being pressed to answer. Finally, she said she did not think it was not relevant.

"That has nothing to do with me," she said.

At one point, Rep. Brent Crane, a Nampa Republican, told Giddings he felt she was being "evasive" and urged her to give straightforward yes-or-no answers to the questions.

"Just be candid with the committee," he says. "Don't hedge this way and hedge that way and play these semantics and games."

Giddings did not call any witnesses on her behalf, saying that she had prepared a list of people she wanted to testify but thought the ethics committee would take care of sending subpoenas to the people on that list.

If Giddings is found by a majority vote of the committee to have violated ethical standards with her behavior, committee members could recommend she be sanctioned or expelled from the House. The full House would then vote on those recommendations. Committee members could also find that what Giddings did does not amount to an ethics violation, and dismiss the complaints against her.

In von Ehlinger's case, the ethics committee found the lawmaker had committed "conduct unbecoming" and recommended he be expelled from the Legislature; he ultimately resigned just before House members could vote on whether to kick him out. Boise Police has forwarded the rape investigation to the Ada County Prosecutor's Office; as of Aug. 2, no criminal charges have been filed.

The ethics hearing is set to resume Tuesday morning at 10 a.m.