Aaliyah Shepard will spend the next month in a Salt Lake City hospital having four surgeries. 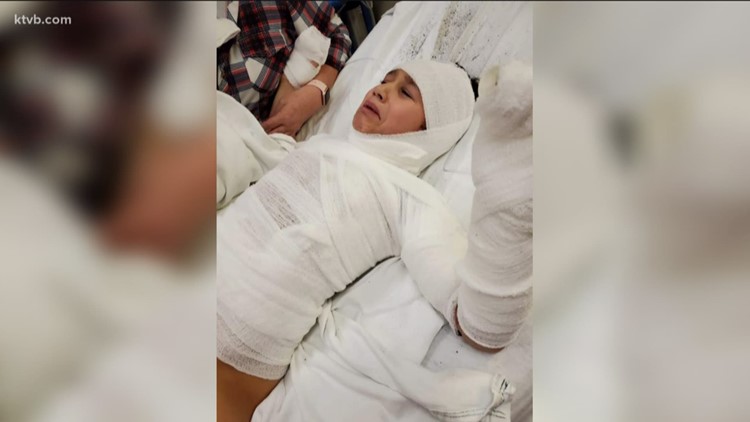 MOUNTAIN HOME, Idaho — It’s been a difficult few days for Jamerson Shepard, but it's nothing compared to what his 8-year-old daughter Aaliyah has been going through.

Over the weekend, Shepard told KTVB, Aaliyah was reaching over a candle to get a drink when part of her sequined shirt caught fire.

“It just set her on fire and the shirt just kind of melted into her chest and gave her really bad burns on her back, her chest area and it went down part of her leg and some of her arm as well,” Shepard said.

The incident burned 25 percent of Aaliyah’s body, leaving her with third-degree burns.

“It's going to be life changing for her,” Shepard said.

On Sunday, the family flew to Salt Lake City, where Aaliyah will now undergo four surgeries. The first one happened Tuesday when doctors put in a breathing tube.

“The doctor told us we're going to be here for about a month,” Shepard said. “It's going to be kind of hard.”

Which is why some people in the community are now stepping up to help Aaliyah and her family. Realtor Kerri Thomas and Paws and Claws owner Farah Sanchez are holding a fundraiser on Sunday.

As for Aaliyah, she has a long road toward recovery ahead of her.

“If you have candles or anything flammable, please be careful because I would hate for another child to go through what my child is going through” Shepard said.

Christmas is Aaliyah's favorite holiday. She's asking for holiday cards to decorate her room. The cards can be sent to:

The Mountain Home Fire Department burnout fund will go toward helping the family.

A Facebook fundraiser page has also been set up.