Syringa Middle School held a kindness assembly where poster of victims from the Parkland shooting were hung. 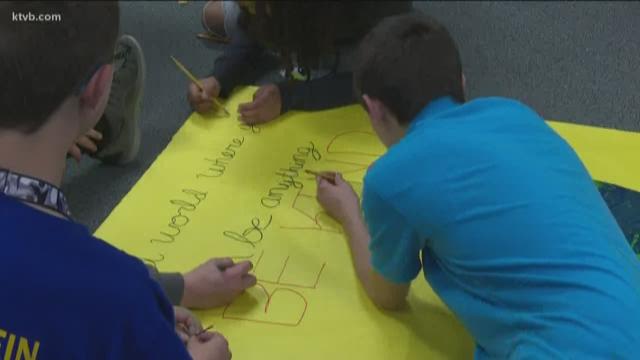 CALDWELL - The "see something say something" campaign has been going on for several years at Syringa Middle School.

But after the Parkland, Florida school shooting, Syringa students are stepping it up a notch and making a difference through simple acts of kindness.

In preparation for a kindness assembly Friday afternoon, each homeroom at the Caldwell school took on several tasks, which included hanging posters on classroom doors with positive messages, sticking kind Post-it notes on lockers, and making signs to honor all 17 victims from the Parkland school shooting massacre.

"It really brought it home to them that this was a kid their age that went to school and didn't come home," says Jared Sliger, an 8th grade math teacher at Syringa.

Students brought the signs into the auditorium to display at the assembly, which was followed by various speakers, all with one message.

"The assembly today is trying to get them to buy into that and to really believe that they have that power because once they believe it our world is going to be a different place because we are going to have a new generation of kids that see people as equals," says Macey.

Teachers at Syringa believe middle school is a pivotal age and one of the most important times to teach kids that being kind can be very impactful.

"We had anti-bullying campaigns and I think it’s better to come at it from the other perspective, let’s not discourage bullying, let’s just be kind then bullies will stand out and not have a place to function,' says Sliger.

"Kids are so insecure at this age and they are trying to figure out which path they are going to take for their life, so this age is absolutely critical," says Macey.