‘I cannot explain how grateful I am’: Caldwell homeowner gets new roof thanks to good Samaritans

Local roofing contractor Eric Libby partnered with Habitat for Humanity to replace a Caldwell woman's roof that was near to caving in. 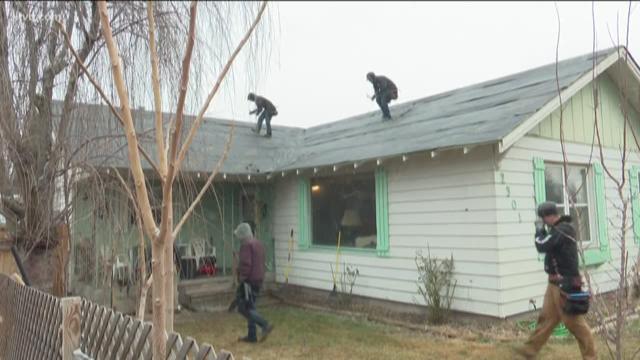 CALDWELL, Idaho — Christmas came early for one Caldwell woman, as she got a brand new roof put on just in time for the winter weather to hit.

Her new roof came at no cost to her, thanks to the generosity of a local roofing contractor and Habitat for Humanity.

Dale King bought her current house in 2016, but it was built long before that.

“1924, this house was built and when they got into the layers, they could tell this was the original roof,” she said.

Nearly 100 years old, the roof is still intact but is worse for wear.

“I’ve gone through four insurance companies and they keep not wanting to renew me because of the roof,” King said.

Though it has been repaired several times over the years, it's never been fully replaced. But that all changed this week.

Eric Libby, owner of Ridge Runners Remodeling, partnered with Habitat for Humanity to give King her long-awaited new roof.

“This section over here was about to cave in so we re-trussed this far right corner and then there was a couple of holes so we just re-sheeted the whole thing and now we’re shingling it,” he said.

Habitat for Humanity and a local roofing supply company donated the materials needed for the job, while Libby and his team donated the time and labor to do the work.

Libby says they got the project last Friday and started work Monday. The new roof will be completed on Saturday - taking them less than one week to finish.

“I cannot explain how grateful I am because when I realized this roof would not have made it through this winter, I cannot even imagine how horrific that would be,” King said.

King was so grateful that she wanted to give back to Libby and his crew. So she cooked them all hot lunches every day they worked on the house. And that's not all she did.

She adds that this whole thing has made her holiday season wonderful. And she not only got a new roof but new friends.

“These guys are all just fabulous – fabulous,” she said.

Besides King's house, Libby also repaired six other roofs around the Treasure Valley for free.

When asked why he did it all, Libby said because it's easy to give.

“I really hope this becomes a trending thing for people to give back just a little bit. Because a little bit goes a long ways,” he said.