The troop worked together with Troop 1's young men's group to whip up and serve an all-you-can-eat breakfast event. 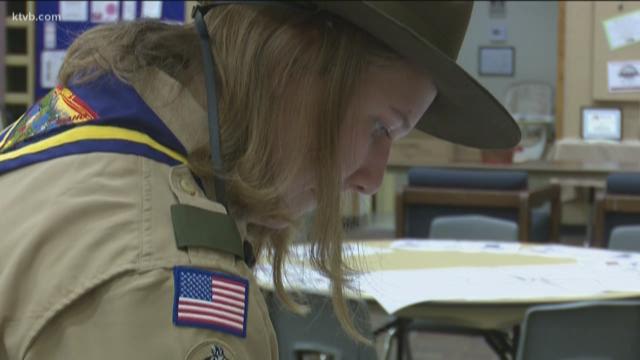 BOISE, Idaho — Last May, the Boy Scouts of America announced that they would start accepting young women into the Boy Scouts program, starting on Feb. 1, 2019.

The troop worked together with Troop 1's young men's group to whip up and serve an all-you-can-eat breakfast at the Meridian United Methodist Church on Saturday morning.

It was BSA Troop 1 for young women's first public event and a new opportunity for some of the newly minted Scouts.

KTVB spoke with some of the scouts Saturday night, as they prepared for Saturday's breakfast event.

"It's an amazing opportunity where you get to find who you are, its something new and fun," Grace Christensen said.

Christensen is part of BSA Troop 1 and says she's in it for the adventure and a little bit of soul searching.

"I tried girl scouts and it wasn't really for me," she said. "It's something that my dad did, and his brothers, and its something I have wanted to do since I was really young."

Troop 1's Master Scout says she felt the same way about when she saw her brothers be a part of the Boy Scouts.

"To see them have the opportunity is thrilling and I'm glad that I can be a part of it because I couldn't do it when I was little but I can get in there now and do it," she added.

Higby also has a son that it's in Troop 1's male group, says that he admits that allowing girls to join has been an adjustment period, but says Colt thinks it's a change for the better.

"The girls joining the Scouts, its definitely been a change, there will be a lot of growing pains in the coming future but I think overall its a good opportunity, if anything because of the life skills that scouts teach," Colt Higby said.

Saturday's breakfast was their first event together, but both groups of Scouts hope it will become a longstanding tradition.

Christensen also says they are always looking for more girls to join.