The Bootleg Fire is now 100% contained 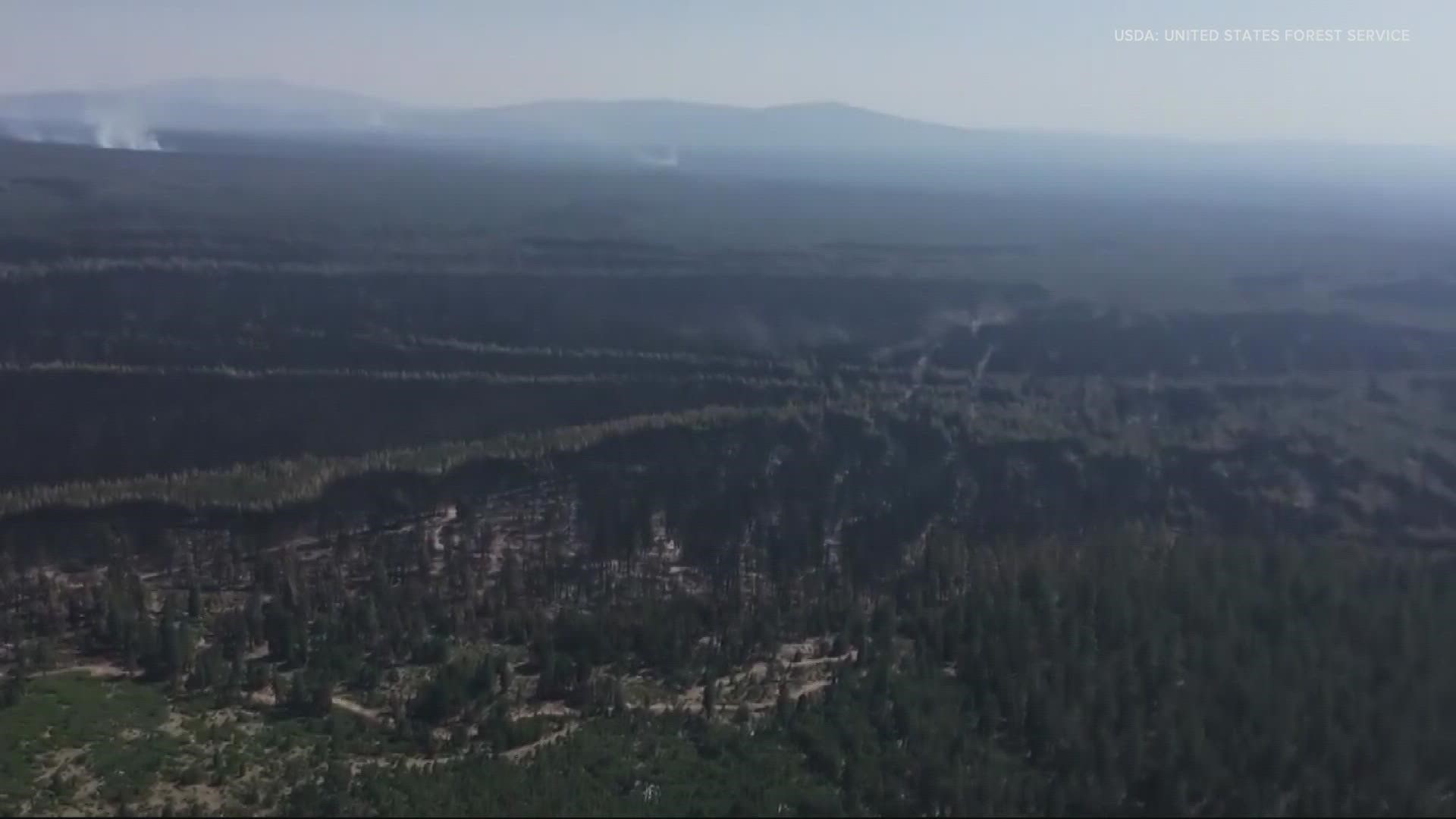 BEATTY, Ore. — Forest Service NW tweeted on Sunday that the Bootleg Fire, along with two other large fires, was 100% contained.

The Bootleg Fire was the largest fire in the country and it burned more than 413,000 acres for 39 days. It ignited on July 6 in the Fremont-Winema National Forest, about 15 miles northwest of Beatty Oregon. Just eight days later on July 12, a nearby fire called the Log Fire ignited and by July 20 the two had merged into one large fire.

The Bootleg Fire was so large the smoke was being seen and smelled clear across the country on the east coast and the fire was so powerful it was creating its own weather.

RELATED: Yes, wildfires can create their own storms

“It has been an honor to work with the local, regional, and national cooperators on this incident,” said incident commander Rob Allen in a press release on Friday. “We are grateful for the support we’ve received from the local community. Every bit of it helped our firefighters contain this large fire under challenging circumstances.”

Allen noted the Bootleg Fire is still burning, but not growing beyond firefighters' containment lines.

"It'll be a while before it's called 'out," Allen explained. "You'll see smoke on it for the rest of this year for sure and some in the spring when the snow comes off. Good chance there will be some stump holes out there that will still be burning."

We’re thrilled to announce that three large wildfires—including the Bootleg fire which burned across 413,000 acres for 39 days—are 100% contained as of this morning. Huge thanks to our dedicated & incredibly skilled fire personnel for this great accomplishment. pic.twitter.com/l8RvWQGraL

As the fire burned, some people lost everything, including a family who spent their time mopping up hot spots after their house burned, and an 89-year-old veteran who lost his home. Farmers returned to their land to find mass cattle loss, too.

At the end of July 2021, the Northwest Interagency Coordination Center (NWCC) tweeted out a graphic that shows the difference in wildfire statistics between July 31, 2020, and July 31, 2021.

The graphic showed that in 2021, there were nearly 60 times as many acres burned year to date as there were at the same time last year, in double the number of fires.

This data shows that the 2021 fire season has outpaced the 2020 season significantly so far.

However, the 2020 season did burn more than 1.1 million acres across the state. It is unclear whether 2021 will see more damage than that. The largest fire that burned in Oregon during the 2020 season was the Beachie Creek Fire, which did not begin until August.

Several other fires still remain burning in Oregon and Washington and wildfire season continued. Click here for the latest on those fires.