Courageous Kids Climbing took to the ice with Boise State and the USC hockey teams during the McCall Winter Carnival. 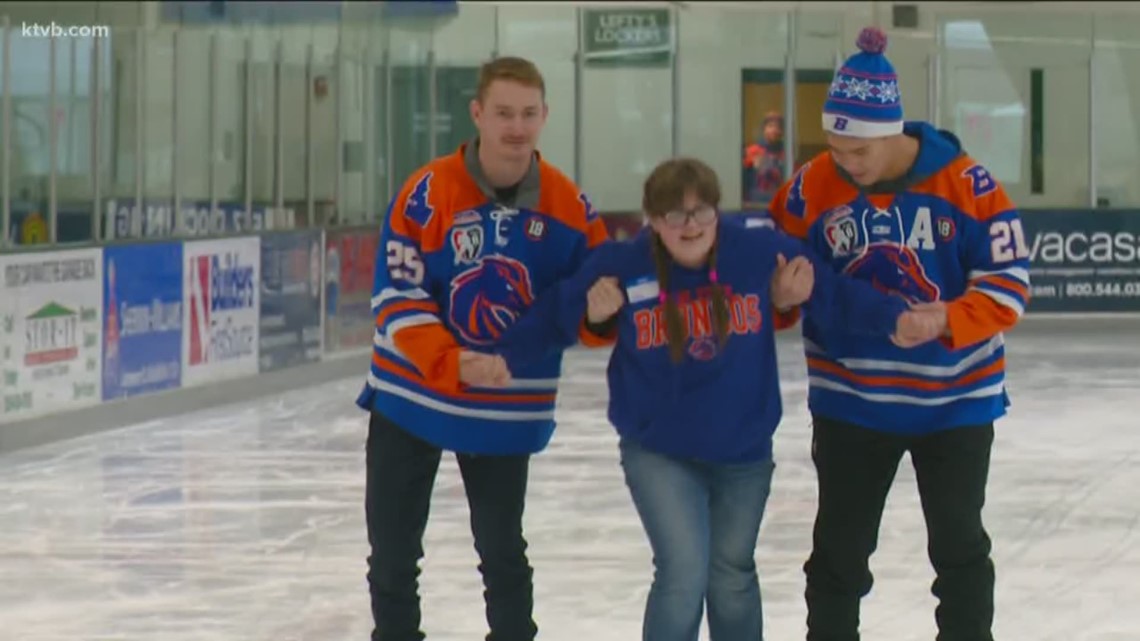 BOISE, Idaho — It was quite the scene over the weekend in McCall at the Manchester Ice Rink when players from both the Boise State and University of Southern California hockey teams spent an hour with kids from a local organization based in McCall called Courageous Kids Climbing.

The non-profit provides opportunities for kids of all ages with special needs to experience rock climbing and so much more.

"Hey mom!"  beamed a youngster while being pushed in a chair along the ice by a Trojan hockey player.

It was hard to tell who was enjoying this day more. The kids or the players who embraced a moment they won’t soon forget.

"They uplift us more than anything,” said Boise State junior defenseman Jimmy Meyer. “We come out here and we're supposed to be helping them, but they do more for us."

The mission for Courageous Kids Climbing Director Jeff Reichmann, a retired firefighter, is to build confidence by helping kids conquer fear and that mission was accomplished.

"I've got parents of kids with autism that don’t like to be touched and they are here for an hour with hockey players as they skate around the ice, arm in arm, and mothers will talk about what a miracle this is,” Reichmann said. “It’s a perfect opportunity for the kids to socialize without fear of people pointing at them, laughing at them or things like that."

RELATED: 'The industry itself is inclusive': Agriculture teacher in Fairfield shows how kindness matters

Smiles, cheers and high fives broke out when a handful of kids scored their first goal against a college hockey goalie as he sprawled onto the ice trying to make a save on a shot that would find the corner of the net.

“I scored!” screamed an eight-year-old youngster from his ice chair pushed by a member of the Boise State team in a moment that drew a huge ovation from those both on and off the ice.

"This'll top anything you're going to do this week, this month, this year," said Meyer who was already talking about making it an even bigger event next year.

Organizers already have a number of other activities planned for these kids, including taking kids who are blind to the Meridian Speedway so they use their sense of touch to check out the race cars there.

“Oh, ya, these kids and us will be talking about this for a long time!” he said.

For more information about Courageous Kids Climbing, check out their Facebook page.

RELATED: 7's Hero: Eagle mother creates a foundation to honor her daughter who died from a deadly brain tumor