On Monday, Boise residents and City Council candidates weighed in on the proposed stadium. 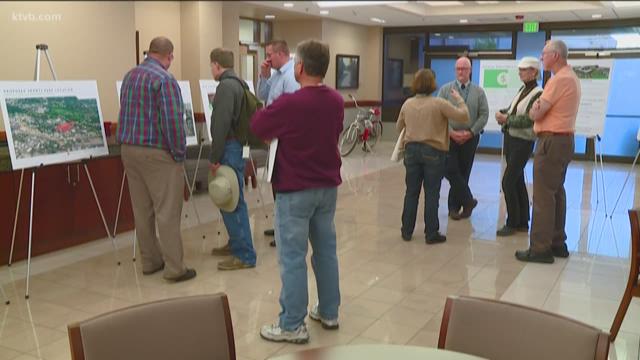 BOISE -- It remains a hot topic around the City of Trees: the proposed mixed use sports complex.

Monday was the last in a series of open houses this fall. Monday was also an opportunity for a handful of Boise City Council candidates to speak their mind on issues confronting our community- one of them being the Boise Sports Park.

Key players say the stadium is not a done deal, but documents show they have been meeting and hashing out details together for more than a year. KTVB's Morgan Boydston received hundreds of public records over the last couple days and is starting to sort through them to help shed light on the project. Thus far, the documents have really given us a window into how these processes work with private-public development.

It's become apparent that the public really didn't have an opportunity to weigh in on the project until the first open house a week and a half ago. That phase of the process is essentially complete, with Monday marking the last open house where Boiseans could learn about the proposed sports park and speak with city officials face-to-face.

"I'm not real enamored with the location. It's an area of the city that really should experience a little more quieter development," one open house attendee, Jody Hull, said. "They're saying 'we kind of have already decided this and we want your approval', rather than saying 'what does the city think we should do with this property',"

Other attendees we spoke with at the open house said: it's a good idea, but it's in the wrong spot, and they're concerned about noise and traffic.

But many who came out were in support, writing on surveys that they feel the multi-purpose sports park would be a great asset to the city economically.

The next step in the project process comes this winter when Boise City Council and the Greater Boise Auditorium District (GBAD) will consider the financial structure and vote on how this stadium will be paid for. As two public entities expected to contribute taxpayer money, the City is planning to pitch in $3 million and GBAD is expected to contribute $5 million.

In the meantime, KTVB is digging through documents and e-mails. So far, we found some dating back to September of 2016 that show frequent "Tri-Agency Meetings" on the multi-use park between the City of Boise, Capital City Development Corporation (CCDC), GBAD officials, and some meetings with the developer of the stadium and surrounding private mixed-use development, Chris Schoen with Greenstone Properties.

This contentious sports park will confront city leaders over the next several months, coming right in the midst of three City Council elections. The 2017 city election will take place on November 7 for council seats 2, 4 and 6. KTVB attended a candidate forum for seat 2 on Monday, currently occupied by Ben Quintana who is not running for re-election.

KTVB asked each candidate what their thoughts are on the proposed ball park. These were their responses:

"I support it in principle," candidate Frank Walker told KTVB. "I can only support it, though, if the funding that is expected from the city or public sources is absolutely guaranteed to be returned."

"I think the stadium is too risky to be throwing a lot of taxpayer money at for that number of years when there's so many other projects that could be done in the outer parts of the city," candidate Rachel Misnick said.

"I'd love to see a sports arena go in; whether it's that location or another location, I think it'd be great for the city economy," candidate Paul Fortin said. "I do not like using any tax dollars because we're already tapped out."

"I think it's exciting to have some new development in that part of Boise, but I also see it as an opportunity to address some of the concerns our citizens have," candidate Lisa Sanchez said in touching on how the city could be innovative in making the development geared toward affordable housing and higher paying jobs.

She also noted people are concerned about the noise and light pollution.

"I'd love to see citizens in the community be able to vote on it. I think it's a giant red flag that the city wants the citizens to get behind it, but yet they're too afraid to let the citizens vote on the issue," candidate Logan Kimball told KTVB.

MORE: Soccer community speaking out in support of stadium

"These kinds of agreements are common when details of a potential real estate transaction and/or economic development agreement is being considered by the city. They are designed to the protect proprietary/trademark information of private individuals or companies that often must be disclosed to the other parties during negotiations.

"The City Council will be briefed about the public response during the open house/comment period next week. Going forward public session conversations with the council regarding the city’s financial participation with the Sports Park project will happen in coming weeks, but final details about when and how are yet to be determined."

Come next spring, the project will undergo a land-use process with the City of Boise Planning & Zoning Commission to study traffic, noise and light pollution among other issues. The public will have chances to weigh in then.

The online commenting period is through, but you can send your feedback and comments to mayor@cityofboise.org.