The city of Boise's vision for an historic 20-acre site off North Cole Road: preserve the past while educating the future. The city did a land swap for 6.3 acres of land near Whitewater Park Boulevard with development company LocalConstruct to acquire Spaulding Ranch in 2015. 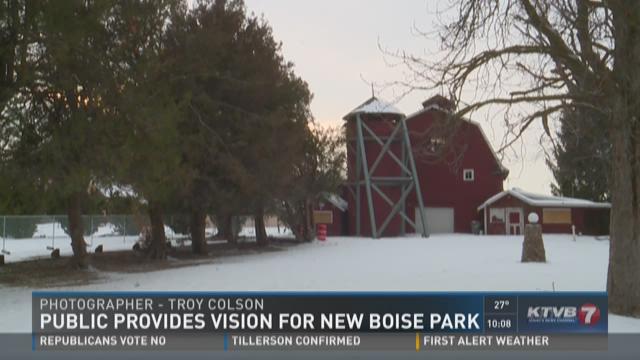 BOISE -- The city of Boise's vision for a historic 20-acre site off North Cole Road: preserve the past while educating the future.

The city did a land swap for 6.3 acres of land near Whitewater Park Boulevard with development company LocalConstruct to acquire Spaulding Ranch in 2015. The Boise Parks and Recreation Department has been putting ideas together since November of last year.

On Wednesday, people gave feedback on how the city should develop the property to best serve the community.

Driving down North Cole Road near Mountain View Drive, you've likely seen a vacant, boarded-up house and outbuildings in the foreground of a lot with a huge red barn and silo, and surrounded by open space and farm land.

You have probably wondered, "What is that?" Boise city leaders say that curiosity is good because it has sparked quite a bit of engagement from the public. People who live in Boise have a big say in what this property will ultimately end up looking like.

A one-of-a-kind piece of land that is unique inside city limits, Spaulding Ranch was once a homestead farm at the turn of the century.

"It used to be a working farm and has a tremendous amount of historical value," Holloway added. "We've preserved it at a point where it's not going to deteriorate any further than what it has deteriorated."

A space of opportunity, where the city could incorporate education and history, combining preservation and conservation, as they take people back in time to show what farming looked like a century ago in Boise.

"We could put some displays in [the house]. There's just a lot of rooms and opportunity that you can re-create how this house sat here in the early 1900's," Holloway said.

The open space on the property would stay open space and, on a small-scale, Holloway says sections of the land could be used for farming once again. As for the staples of the property - the two-story barn and the silo, which are in sound condition - the city sees opportunity for an event center and public meeting space.

But it really is up to the public what they want to see done at Spaulding Ranch. Holloway says neighbors and those with a vested interest have expressed a strong interest in seeing the land preserved - as the ranch is on the National Register of Historic Places.

"This end of town doesn't have as many public assets as some of other parts of town," Boise City Council President Elaine Clegg told KTVB.

Turnout at the public meeting on Wednesday night was high, as people were able to work together to create potential concepts for the park and provide input on the master plan.

"We're just really excited that people are so engaged, I mean look at this crowd," Clegg added.

"There are no parks like this in our area of town at all that would be a working farm unit," one neighbor told KTVB. "We're focusing as much as we can on getting this to be a good educational open space for us."

The parks department says the planning process could take about nine months to a year.

After they present the final plan, it must go to the City of Boise Parks and Recreation Commission, Planning and Zoning and the Boise City Council before actually moving forward.

At this time, there is no timeline on when we could see this property fully developed.