St. Vincent de Paul, Astegos and the Boise Phil held a free dinner and performance Monday night to help lift federal employees' spirits as they struggle without a paycheck. 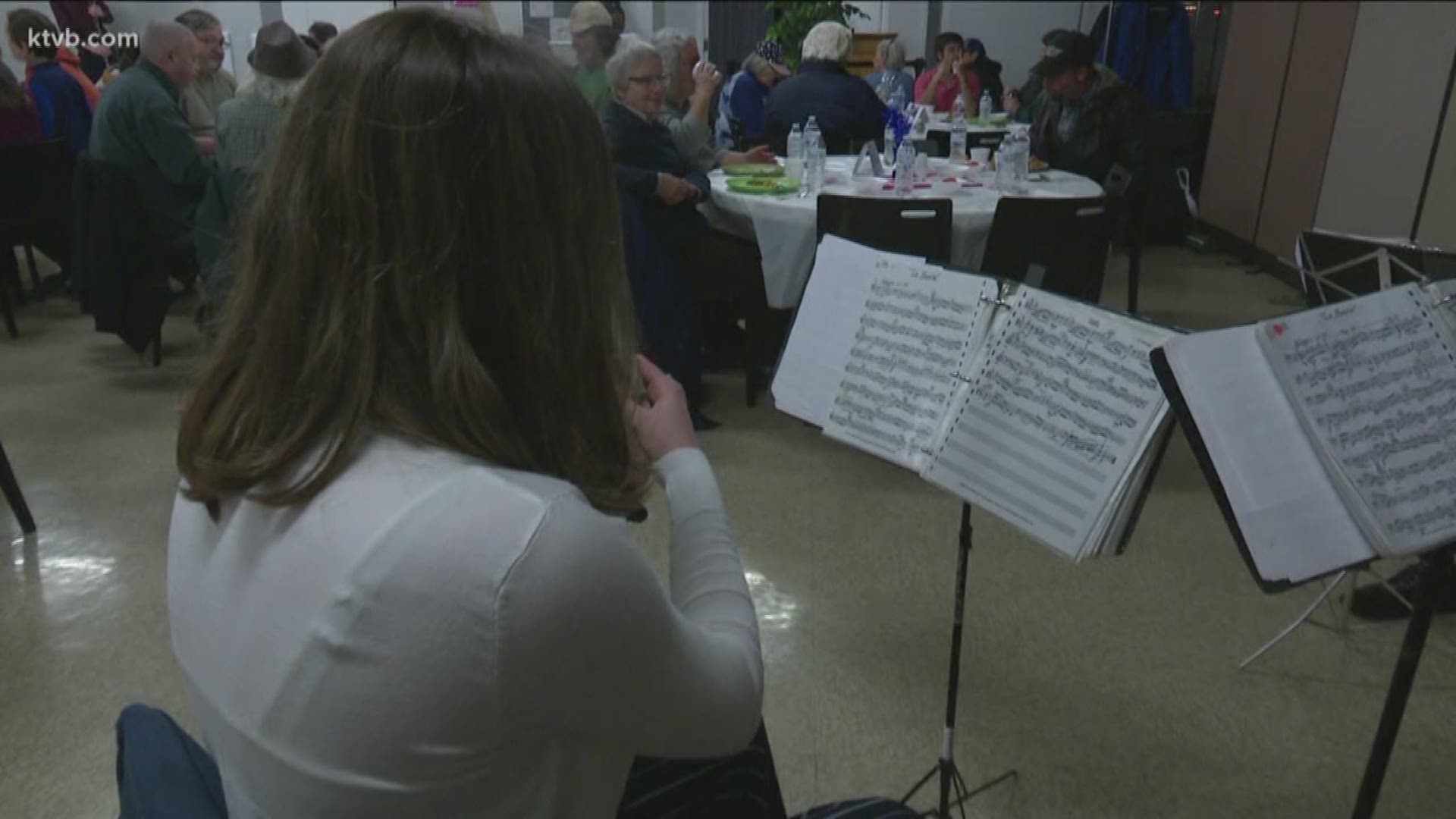 BOISE, Idaho — It's going down in history as the longest government shutdown in U.S. history. Federal workers haven't seen a paycheck in weeks.

So Monday night, local organizations banded together to lift their spirits by putting on a free concert and dinner for anyone affected by the month-long shutdown.

St. Vincent de Paul, Astegos and the Boise Philharmonic want struggling families to know they're here for them. About half the people in St. Vincent de Paul's dining hall were regulars, working poor families served dinner there every week, while the other half were federal workers. The organizations say they served twice as many people as normal on Monday night.

To people like TSA manager Brian Davis, it meant a lot - even just for one night.

"It lifts my spirits, gives us a sense of we're in it together,” he said. "It really shows how much love there is among the American people. What an amazing sense of generous spirit there is."

RELATED: For the poor, the safety net in a shutdown doesn't feel safe

Davis says it was nice to speak with other federal employees at dinner, like a woman who works for the Small Business Administration, to learn about their experiences and grasp the bigger picture of impacts of the shutdown.

Nearly 800,000 Americans aren't getting paid, and many are living in a constant state of the unknown.

“Am I going to have a paycheck? I'm a single dad, how am I going to keep on supporting my son, make sure food is on the table, make sure my mortgage is paid. I feel betrayed,” Davis said. “We're in this weird in-between space where I don't know what’s going to come and feel constant worry.”

To relieve some of that worry, Astegos, St. Vincent de Paul and the Boise Phil gave them and their families a free dinner and show.

“We're here to try to ease that burden a little bit,” Astegos Executive Director Tim Flaherty said. “Anyone who's gone a month without a paycheck knows it starts to get pretty tight.”

The event was also a chance for workers to decompress from the stresses of the last few weeks.

“It gives you a time-out, a chance to step back and just feel special,” St. Vincent de Paul Executive Director Ralph May told KTVB. “I think that’s a really important thing, that we feel special, that somebody cares. To have the Boise Philharmonic, to have everyone to help serve the meal, it says we care.”

Boise Phil Board Member Martin Jacobs says "music is the food of life," and the Boise Youth Phil performance at the St. Vincent de Paul dining hall added a component to help make these workers’ difficult time a bit easier.

“It covers both sides, it covers material needs about having a warm, welcoming environment with their meal, plus being entertained at the same time,” Jacobs said.

Boise Philharmonic Music Director Eric Garcia also showed up, recognizing the opportunity to give back to the community by showing off talented young musicians and providing beautiful music for all to enjoy.

“By being able to combine our forces and come together, I think it results in something really wonderful like you see tonight,” Garcia said.

As the shutdown drags on, all the organizations want to make sure workers are fed and cared for. Many might be experiencing food insecurity and don't know how to ask for assistance because they’re never had to do it before.

“We want to stress we care about the people that are hurting,” May said. “If you've never had to access assistance before you really don't know what to do and are probably very uncomfortable to do it. We just encourage people to ask. We're there for them and really want to help."

St. Vincent de Paul is encouraging people to stop by their fresh food pantries, where you must show an ID to register for assistance.

But they are also calling on the public to donate, as the pantry is taxed due to the surge in need over the last month.

“We are looking for more resources because if this drags on much longer, of course, the impact is going to be even greater. But we are able to help everyone that comes to us at this point,” May said.

Workers like Davis that KTVB spoke with are appreciative of the acts of kindness, but say they want to be normal working Americans again.

“The traveling public has been very supportive, we've been getting food and outpourings of support and special events like this, but nothing is the same as just getting a paycheck for work,” Davis said.

On top of this free event, Boise Phil is offering federal employees affected by the shutdown two free tickets to a performance on February 15. They ask that federal workers call their box office for more information and to redeem the offer at 208-344-7849.