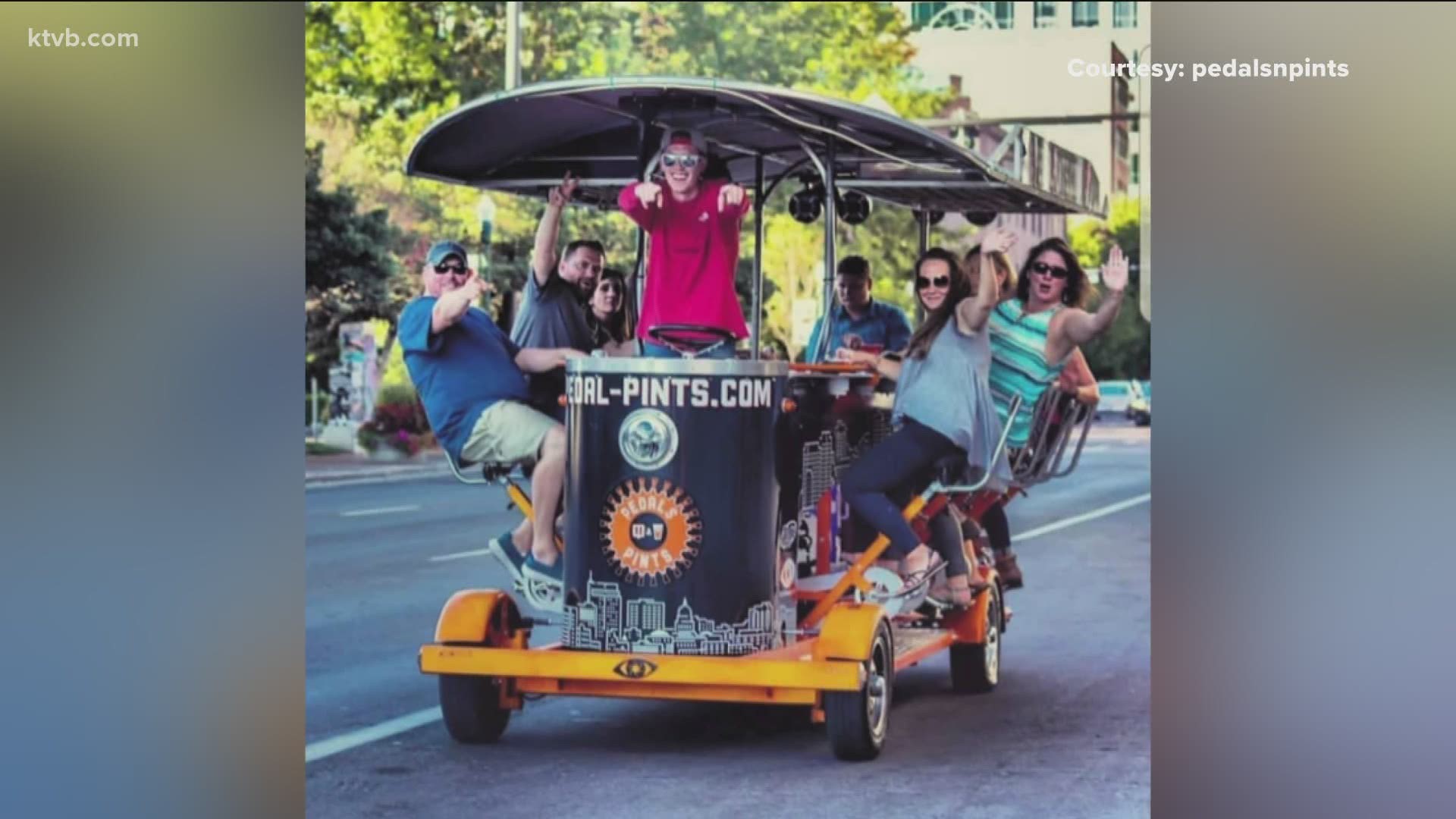 The city of Boise will ban alcohol on bike bars, pedal-powered attractions that are popular among downtown visitors and others, yet divisive among residents and business owners.

City council on Tuesday unanimously passed the ordinance, which also limits music volumes and prohibits bike bars from operating after 10:30 p.m. and during weekday rush hours downtown. Bike bars, powered by a group of pedalers under the direction of a driver, travel along city streets as the group makes stops at restaurants, bars or other destinations.

One bike bar operator expects the new rules to cut his revenue by up to 40% and possibly lead to staff cuts. Bike bars do not sell alcohol, but the prohibition of alcohol on-board may drive customers away, Pedals & Pints owner Michael Thomas said.

"That's on city council, because they're doing it to keep very few agitators quiet," he said.

Councilwoman Holli Woodings said the city council has been working on the ordinance for a long time. Councilmembers heard feedback from bike bar owners — they opposed the alcohol prohibition and noise regulations during an October city council work session — as well as citizens and downtown business owners.

"This seemed like the most prudent course of action given everything that we heard and learned in that process," Woodings said. "Hopefully we'll have a little more peaceful environment in downtown in the coming summer and still allow the bike bars to do pub crawls as usual."

Thomas was incensed when he heard the city council was moving forward with the ordinance. While he was willing to concede limiting hours to avoid traffic and while his bikes already have sound regulators, Thomas said the alcohol prohibition unfairly punishes bike bars for "bad behavior" that occurs at all drinking establishments downtown.

"I think it's preposterous that they think that's really going to change anything," Thomas told the Idaho Press. "There is no behavior that takes place on the bike bar that doesn't take place just outside of the bars."

The city council last summer began contemplating regulations on bike bars, which city staff said have amassed multiple complaints — the bike bars began operating in 2012 and were allowed to operate with open alcohol containers in 2013. Complaints related to noise, traffic safety and drunk and disorderly conduct of patrons. The complaints were not documented, according to Seth Ogilvie, communications director for the city, so it's unknown how many there were.

In addition to Pedals & Pints, Boise Bike Bar and Boise Buzz Bike operate downtown. Boise Buzz Bike owner Brady Olson told city council members during their October work session that bike bars have become popular across the nation, in large part due to their economic benefit, as a transportation source for tourists to travel to other local businesses, such as bars and restaurants.

"We offer a unique tourism experience that kind of encompasses all of downtown Boise, as a whole and collectively," Olson said.

Bike bars have been shut down since early in the novel coronavirus pandemic. A city public health order mandated the bike bars close, and they remain closed today, despite the fact that brick-and-mortar bars are now allowed to operate.

Bike bars' music volume will be limited to 62 decibels, which is about the same as a conversation in a restaurant or an air conditioner 100 feet away.

Thomas said his business has addressed each of the major complaints he was made aware of. For example, Pedals & Pints installed a portable restroom at its pick-up and drop-off location after complaints surfaced about public urination, Thomas said.

"There hasn't been a single one that has gone unaddressed by me, personally," he said. "I don't want to cause problems. I want to create an opportunity for people to unwind and have a blast in a novel way downtown."

Woodings was the only councilmember to speak to the ordinance at Tuesday's meeting. In August, councilmembers Patrick Bageant and Lisa Sánchez — who last week replaced Woodings as City Council president pro tem — supported outright banning the bike bars.

“My attitude is you should be able to do whatever you want unless you’re bothering other people," Bageant said in August, "but these things are almost custom-made to bother everybody else to the maximum amount possible."

More from our partners at The Idaho Press: Idaho sees another big boost in state revenues in December