The City Council adopted changes that include lowering the speed limit and identifying reckless riders. 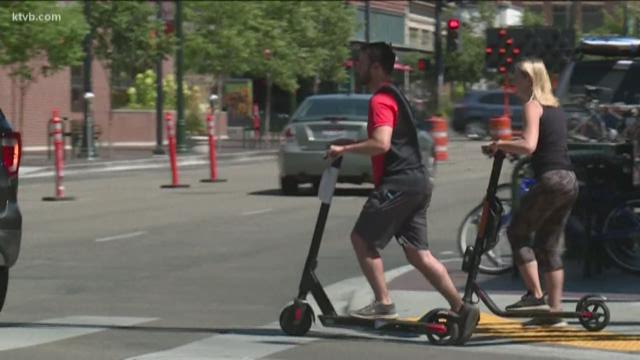 BOISE, Idaho — The Boise City Council has approved several new ordinances designed to address concerns arising from the growing use of e-scooters in the city.

Adam Park, spokesman for the City of Boise, said the main reason behind implementing some rule changes is to improve e-scooter safety.

The city has received reports of accidents and misuse of the scooters and is looking to address those concerns, Park said.

The Boise Police Department responded to five reported e-scooter accidents between January and June, and officers have issued two citations for reckless riding in that same time frame.

According to Park, the changes made are all based on public feedback and concerns the city has seen since e-scooters were first introduced in October 2018.

RELATED: 'There were some lessons learned from the previous deployment': Meridian gets ready to re-launch e-scooters

One of the biggest changes the Council has made involves speed limits. Currently, e-scooters in the City of Boise have a max speed limit of 15 miles per hour. The changes now drop that speed limit to five miles per hour in public, congested places, like the Grove Plaza or around the Capitol.

The e-scooter technology is designed to automatically drop that speed limit for riders.

"One of the advantages of these scooters is they have geo-fencing technology that allows the scooter to either not function at all or not be able to be parked in that area,” Park said. “They can also just say, 'Hey, the scooters when you get in that geo-fenced area will go down to a lower speed.'”

A second change the Council has adopted is to add visible identification tags to each scooter so any rider who is reckless, or otherwise problematic, can be identified through e-scooter use records.

"If there's an interaction or an unfriendly rider that's out there causing problems, someone could call in that number, we would go right back, pinpoint that, report it to the company, and they could take them off the system, " Craig Croner, administrative services manager, said in an Council work session last week.

Cities like Portland and Denver are already using individual IDs on their scooters.

“There’s been a habit among some users, unfortunately, to use the wheels of the scooter to mar the surfaces of some sidewalks downtown,” Park said.

Now, anyone caught vandalizing with e-scooters can be charged with a misdemeanor.

A fourth change includes more enforcement by the city to be able to move e-scooters that are not properly put away and may block ADA accessible areas.

“That’s a frequent problem where either scooters in the morning are placed in the wrong area or a user after getting off a scooter will place it in the wrong area," Park said. "And so now the city has the ability to actually come in and move the scooter themselves so that it’s in a proper area and then fine the company if that’s merited.”

Some e-scooter users KTVB talked to are in favor of the changes, especially the speed limit.

“If there’s a big crowd and there’s an area where it’s busy I feel like you should definitely lower the speed," said Isaiah Mitchell.

“15 miles per hour is pretty fast in a pedestrian area so I think that’s a great thing,” she said.