BLM: Target shooting is a major cause of fires

Three grass fires in the last month were sparked by target shooting, and now the BLM is asking the public to shoot smart. 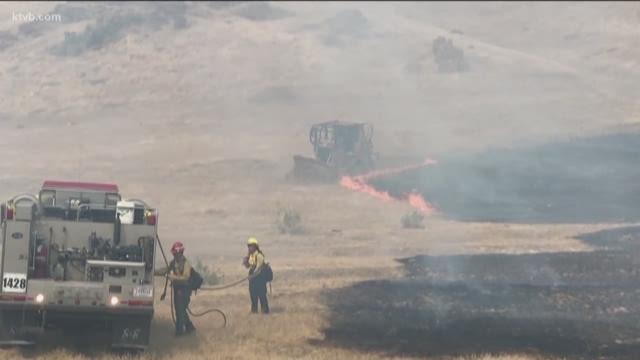 BOISE -- It is a hot one Wednesday across the Treasure Valley; some places are seeing temperatures in the 90s!

Every year with the sizzling summer weather comes the risk of wildfires out on the dry landscape.

The Bureau of Land Management is now asking everyone to monitor target shooting behavior to help prevent grass and wildfires.

It's perfectly legal to go out on public lands for some target practice, but the BLM says target shooting is the second leading human cause of fires.

BLM fire investigator Bob Stroud says the potential for fires right now is high, and sparking one while out shooting can happen fast.

With already three shooting-related fires in the last month, the Boise District BLM is now really pushing for everyone to use public land responsibly this summer.

From May 10 through October 20, the BLM has a fire prevention order that bans certain ammunition and targets.

The order restricts the use of exploding targets incendiary ammunition, tracer ammunition, and steel core ammunition.

Jared Jablonski, fire information officer for the Boise District BLM, says even if people are doing everything by the book, there are still steps you can take to help prevent fires.

"When people are out shooting on public lands during the summer months when it's hot and dry and vegetation is really dry out there, we would really like to see people have water with them and a shovel, potentially a fire extinguisher, so if something does start they can maybe get it put out before it gets established as a large fire," said Jablonski.

The BLM says that also want to see people shooting in places that are clear of vegetation and rocks.

"We are just trying to get ahead of the curve and get the word out there to let people know what they need to take to make sure they aren't starting fires out on public lands," said Jablonski.

Another issue the BLM wants everyone to pay attention to is garbage dumping.

It is very common for people to simply dump their garbage out on public land and leave it.

The BLM says this time of year people also take things from their house to shoot at, like televisions and old furniture, and then they leave it.

The BLM says people caught dumping garbage or shooting illegally on public lands will be cited.