The owners of Big City Coffee asked to be let out of their contract to operate a second location on campus after criticism from students. 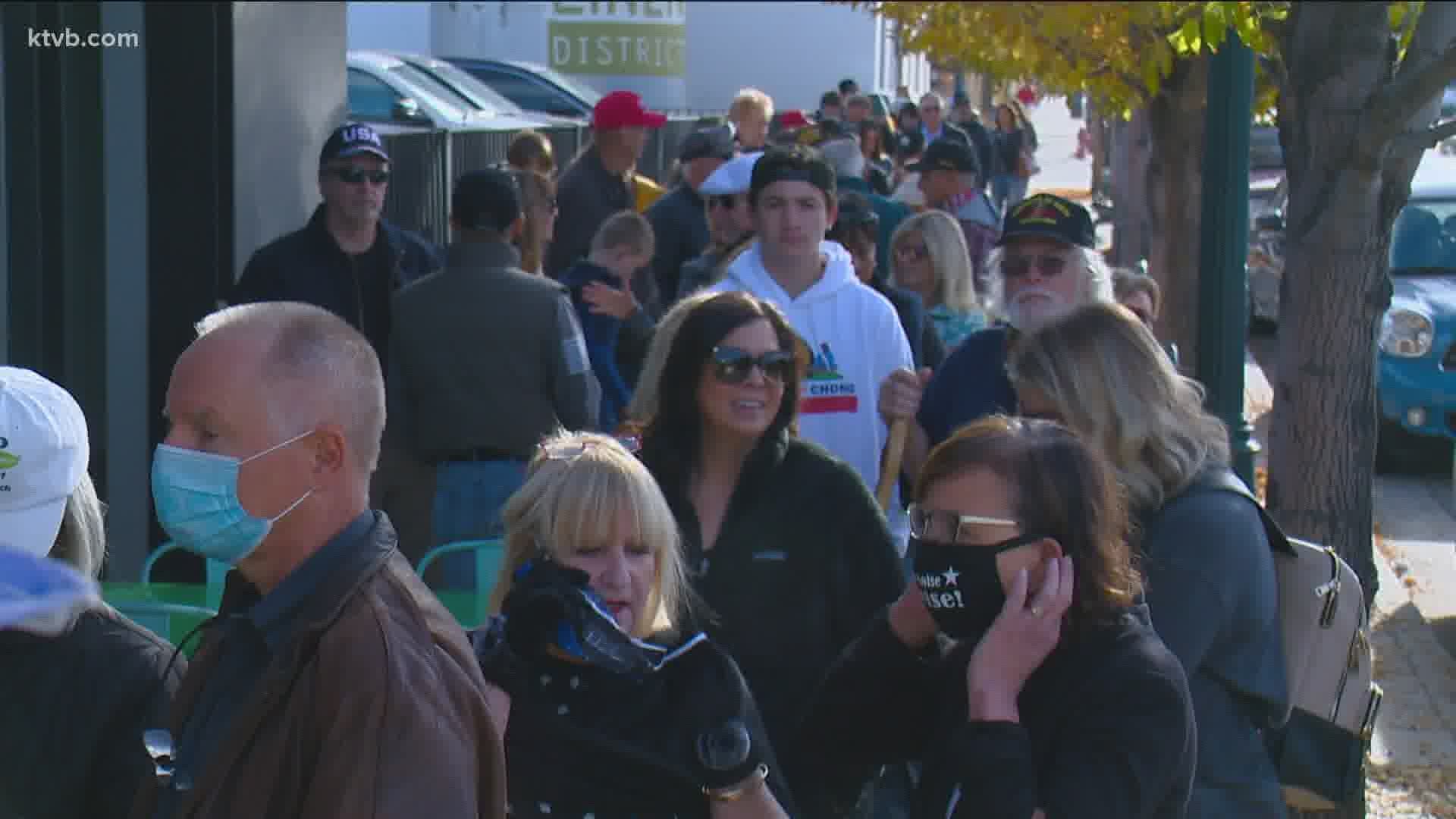 BOISE, Idaho — A large number of people gathered inside and lined up outside of Big City Coffee in downtown Boise Friday morning in an effort to support the business after the owner pulled out of a contract to have a second shop on the Boise State University campus.

The conflict involving Boise State and the coffee shop started after some students at the university criticized the company over a 'Thin Blue Line' flag displayed at the downtown Big City Coffee location. Often displayed as a sign of support for law enforcement, the flag - a black and white version of the American flag with a blue line running horizontally across it - has also become interpreted by some groups as a signal of opposition to the Black Lives Matter movement.

RELATED: Idaho rolled back to Stage 3 of reopening plan amid coronavirus spike

Owner Sarah Fendley wrote on social media that she displays the flag as a message of support to police and her fiance, Boise Police Cpl. Kevin Holtry, who was shot in the line of duty in 2016.

University officials say the owners of the coffee shop asked to be let out of the contract with Boise State, a request that was granted. The campus Big City Coffee was closed down by Monday.

Fendley declined to comment to KTVB, but her fiance Holtry said he was "blown away" by the turnout at the coffee shop's Grove Street location.

"This is really touching and it's been a very amazing day - I've been here for two-and-a-half hours and it's been like this the entire time," he said. "It shows what a great community we have, and what people really think and what people - how they live and how they support, not just first responders but local businesses and people who really commit their lives to Boise."

Holtry blamed the departure of the Boise State Big City Coffee on an "extremely small vocal minority" on campus.

"There's this misconception that [Fendley] left of her own free will, which is actually not even a half- truth, probably an eighth-truth, because she knew darn good and well that she wasn't going to get the support," he said.

A KTVB photographer at the scene estimated the crowd in the hundreds Friday morning. No one appeared to be adhering to social distancing rules, and only a handful were wearing masks.

Idaho was rolled back to Stage 3 of the reopening plan on Monday after a surge of coronavirus cases. Among other restrictions, Stage 3 limits indoor gatherings to 50 people or less and outdoor gatherings to 25% capacity or less.

Boise Police spokeswoman Haley Williams at first said that officers were not responding to Big City Coffee, despite the city's mask mandate. Just before 12:30 p.m., she said officers would go to the coffee shop and speak with the owner.

"When it comes to masks we hope people will take the need to wear one seriously and we are focused on education first and foremost. We are not encouraging people to call in complaints on individuals," she said. "If there is a complaint over masks and the situation turns confrontational or there is further disregard for public safety then we tell people to call police. Again, we have not received any complaints or calls for service at Big City Coffee."

Williams added that officers do not have the ability to respond to every instance of social distancing violations across Boise. She said the department is treating the Big City Coffee crowd the same way they would treat any other social distancing complaint, and are not giving the business preferential treatment.

"We cannot go respond to every group gathering and break it up," she said. 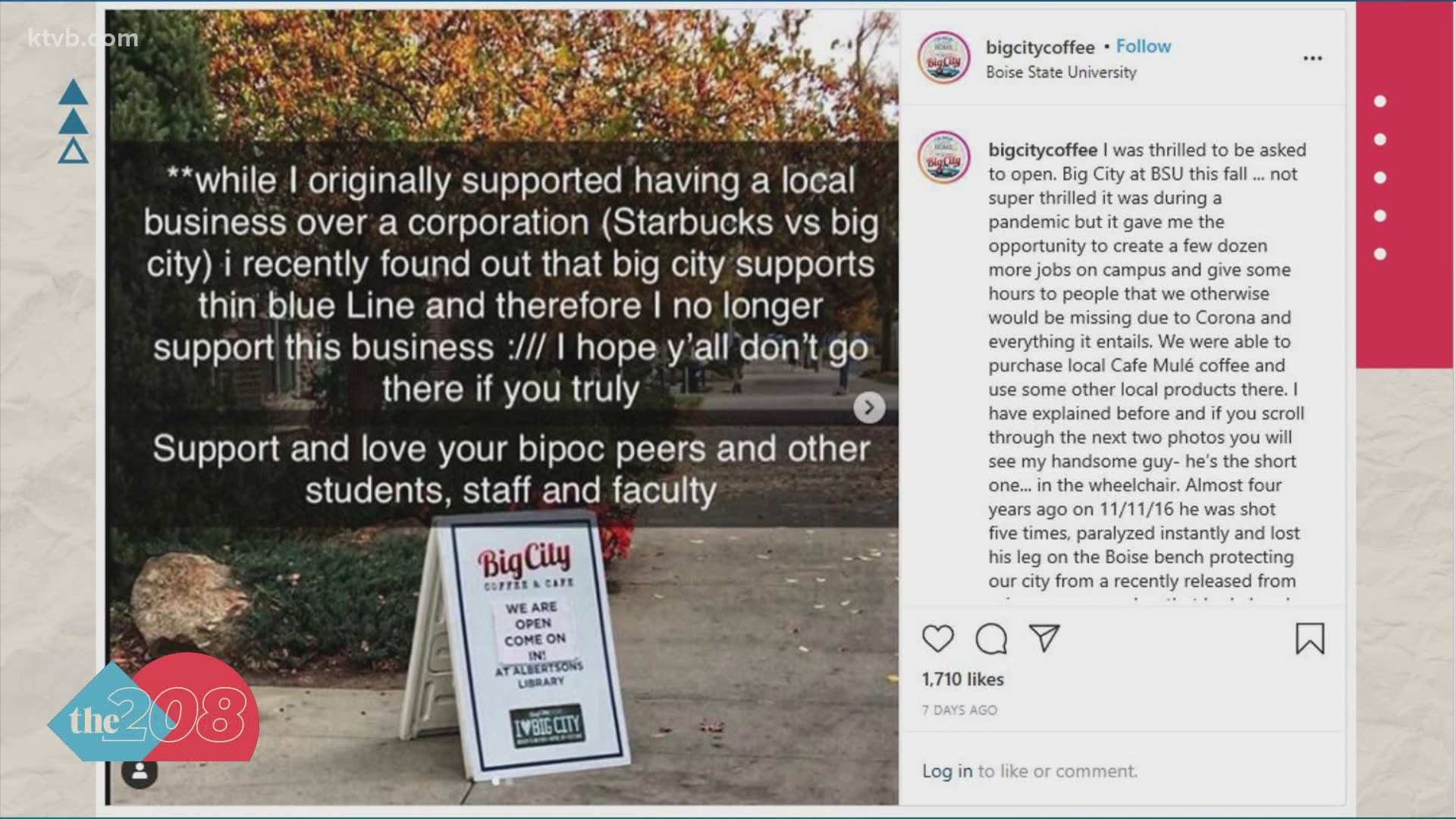