BEND, Ore. -- A Redmond man charged with murdering a 23-year-old Bend woman pleaded not guilty to charges from an alleged California crime spree that took place after the killing. 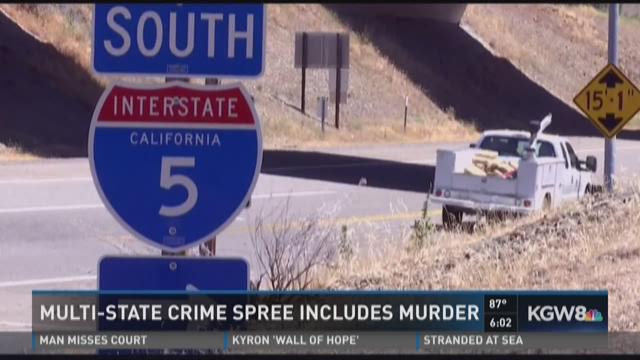 BEND, Ore. -- A Redmond man charged with murdering a 23-year-old Bend woman pleaded not guilty to charges from an alleged California crime spree that took place after the killing.

Edwin Lara on Friday pleaded not guilty to attempted murder, carjacking and kidnapping.

Lara is also charged with murdering Kaylee Sawyer of Bend before he left for California.

Bend police on Thursday said the Oregon State Medical Examiner confirmed a female body found off Highway 126 in the Dry Canyon area was Kaylee Sawyer. Her cause of death was blunt force trauma. A GoFundMe account has been set up for Sawyer's family.

Sawyer was reported missing just after 7 p.m. on July 24. Her family said she was last seen 18 hours earlier at her apartment, near Central Oregon Community College. Her car was still in the parking lot, and her family said she had her phone but it was apparently turned off.

According to witnesses, Sawyer went out with friends for a bachelorette party on the night of July 23. She was picked up by her boyfriend, who drove them to their apartment.

Her boyfriend told police that they got into an argument during the drive. Once parked at the apartment complex, he went up to their second-story apartment and told her to come up "when she was ready." He said he went back down to the car after 10 minutes and Sawyer was no longer there. The two exchanged calls and texts until Sawyer texted "Good bye" and turned her phone off at around 1 a.m. on July 24. Sawyer's boyfriend said he drove around looking for her but couldn't find her.

Bend police on July 25 said the case had become a homicide investigation and they were looking for Lara as a person of interest. Police announced on July 26 that Lara was charged with murder for allegedly killing Sawyer.

"I charged Mr. Lara with murder because I believe the evidence supports the charge of murder," said Deschutes County District Attorney John Hummel. "We've alleged in our information that he intentionally killed Kaylee and that's what the evidence shows."

Lara’s wife, who is a newly hired Bend police officer, told Redmond police that he was acting “out of the ordinary” on July 24. She said Lara told her the following day that he had run over someone while at work and the person was Kaylee Sawyer. She said he told her that he panicked and disposed of the body but wouldn’t tell her where he left it. He also said that Sawyer’s belongings were inside a shed at their home. Lara’s wife said she found a bag with a purse and shoes in it.

She told police that Lara has family in Los Angeles and that he may be on his way there.

Police began a widespread search for Lara, who was believed to be armed and dangerous. Just after 8:30 a.m. on July 26, police announced Lara had been taken into custody, along with a woman, in Northern California.

Police learned the woman taken into custody was actually a victim. The family of 19-year-old Salem resident Aundreah Elizabeth Maes says she was abducted at gunpoint by Lara when she left work the night of July 25. Maes returned to her Salem home a couple days later.

Aundreah Maes' great uncle tells me she was abducted at gunpoint last night while leaving work at Ross pic.twitter.com/t8eOhNKeTU

Lara is also suspected of shooting and critically wounding an elderly man at a motel in Yreka, Calif., and carjacking a mother and her two sons at gunpoint, according to authorities. The family was dropped off along I-5, unharmed, police said.