Behind-the-scenes of ACHD operations during "Snowmaggedon"

KTVB's Morgan Boydston did a ride-along with Ada County Highway District in a Meridian neighborhood on Friday to find out what they are doing on a daily basis during a time many are calling "Snowmageddon". 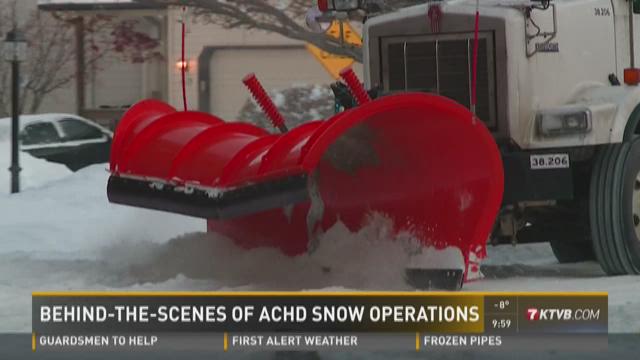 MERIDIAN -- Groans were heard across the Treasure Valley as we found out we're getting hit with more snow this weekend.

"It's a challenge: you plow it off then by the time you come back around it's like you weren't even there," Ada County Highway District Crew Chief Josh Carver said during a ride-along. "You got to plow it off again."

MORE: A bit warmer but more snow this weekend

A never-ending, relentless winter continues in the region, with about three to six inches of snow expected on Saturday and possibly more in the forecast for Sunday. As we all know, the snow and ice have been piling up for weeks on our roads, driveways and sidewalks.

KTVB's Morgan Boydston did a ride-along with Ada County Highway District in a Meridian neighborhood on Friday to find out what they are doing on a daily basis during a time many are calling "Snowmageddon."

Since the snow stopped a couple days ago, ACHD has cleared most of their major roads and high-priority areas. As of 5 p.m., they say they were done plowing about 80 percent of residential roads, with help from the cities of Boise, Meridian and Kuna.

But with this new storm coming on Saturday. the district's focus will once again shift back to those main priority roads.

"Each truck has a route and in their route they have specific targeted areas- major intersections, hills, schools, fire stations, and so on, that they try and target first," Carver said.

Carver tells KTVB they work their way through the priority list from major roads and intersections down to residential roads.

"We've worked our way down to where we can get into the subdivisions and start trying to help these homeowners and do everything we can to assist them so they can get out of their house and get to work or appointments or wherever they need to go."

Unfortunately, Carver says on a 12-hour shift it is impossible for drivers to tackle all the subdivisions in their route. He says it would likely take a couple of days (granted there is no more snow) to get to all residential roads.

Before the first snow in December, crews worked to put magnesium chloride down on the roads to anti-ice. Then, the plowing began. One frustration many people have expressed over the last month or so is that plows travel down the center of the lane and then push snow to the edge of the road, in front of driveways and on sidewalks.

"We can't remove it. All we can do is push it to the edge," Carver said. "[I] try to reduce the amount of snow I put in front of people's driveways."

At this point, in the maze of more than 3,000 miles of residential streets in Ada County, Carver says all they can really do is make it smoother and take the deep ruts out of the road.

"Once it freezes hard and packs down, the plows don't plow it off," he added.

After plowing, crews put down sand and salt mixed with magnesium chloride and create traction on packed snow to treat problem areas such as hills, intersections, school zones and emergency response exits. However, they can't melt the snow off with that treatment.

Even in between storms when there was no snow, Carver says crews were falling back and having to re-treat slick areas where cars had packed down the sand or blown it off. Based on the forecast, street crews will be falling back and focusing on their priorities, starting all over again.

Depending on the amount of snow we get in the Valley, ACHD anticipates clearing the majority of residential streets by Sunday afternoon. Their goal is one plow pass down the center of most streets. One major exception: cul-de-sacs are not being cleared because ACHD’s plows are too big.

To assist plow trucks and graders, try to park your car in your garage or driveway.