Viewer photos shared with KREM showed part of the wreckage being stored in dumpsters out in the open and people were swimming in the lake just feet away. 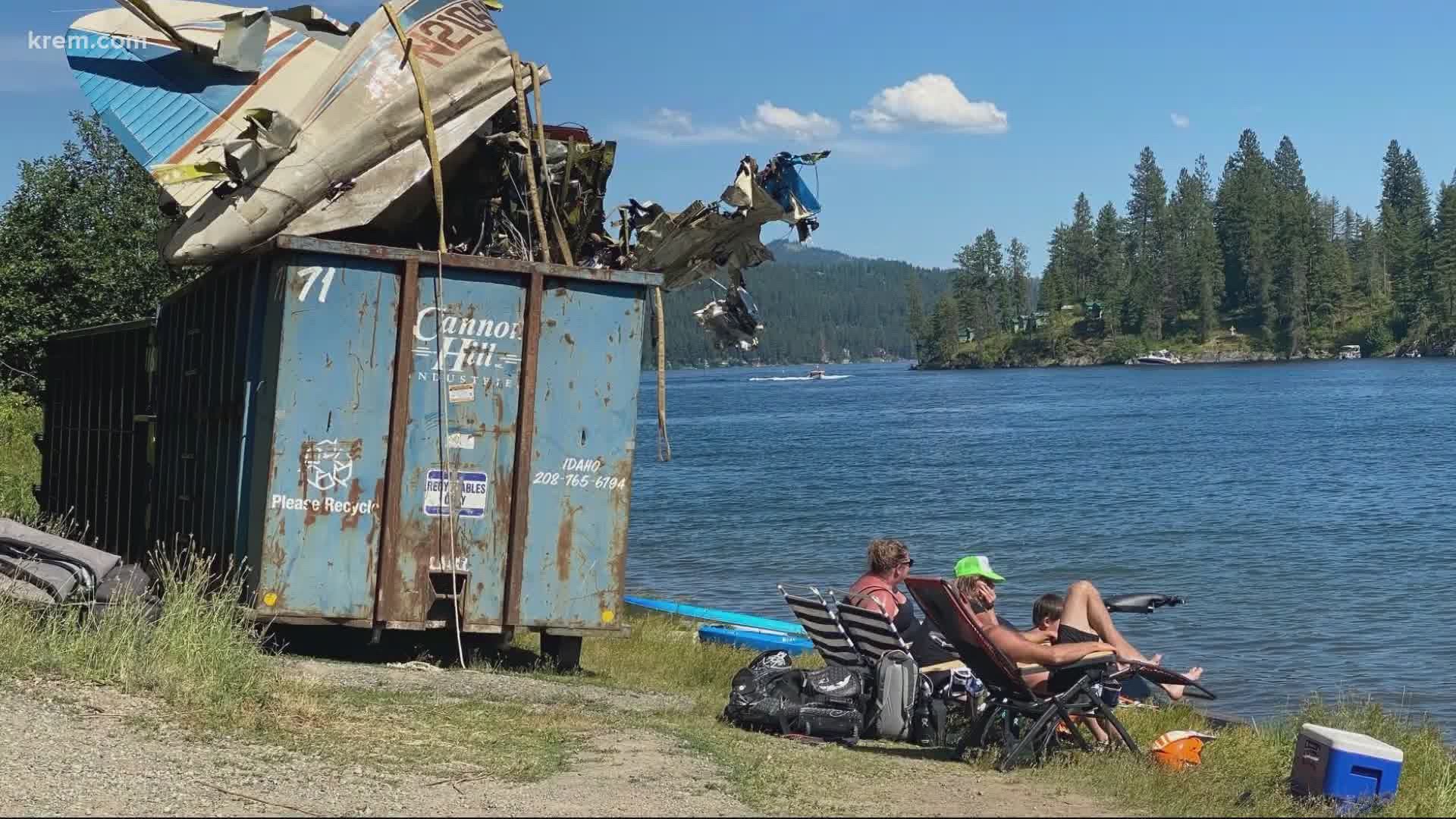 COEUR D'ALENE, Idaho — Authorities doubled down on Tuesday that insurance companies tied to two planes that collided and crashed into Lake Coeur d'Alene over the Fourth of July weekend were responsible for handling and guarding plane debris in the aftermath of the deadly accident.

Photos shared with KREM that showed pieces of one of the planes tied to the fatal crash being left in an unguarded container sparked outrage online following the recovery of the aircraft from Lake Coeur d'Alene. The photos, which were taken at the Loff's Bay boat launch, showed members of the public swimming and relaxing just feet from the containers.

The crash on July 5 resulted in the deaths of eight people after a Cessna and a float plane collided near Powderhorn Bay. It subsequently took authorities days to locate and recover all eight victims in addition to debris from the two planes.

The crash was being investigated by the National Transportation Safety Board.

Recovery crews had been operating out of the Loff's Bay boat launch and were using a barge and crane on the lake to haul up the wreckage from depths over 100 feet. Authorities had subsequently closed the launch to the public for several days.

Despite being part of an active NTSB investigation, photos appeared to show the wreckage at the boat launch unguarded with lake-goers just feet away. Additionally, a viewer who lives near Loff's Bay and who wished to remain anonymous reached out to KREM to say that they witnessed people attempting to take items out of the containers over the weekend.

As of Monday, the containers were removed from the launch and had been taken to a secure location, authorities confirmed. The NTSB had plans to further examine the wreckage off site at a secure facility in Colorado.

Both the Kootenai County Sheriff's Office and the NTSB reiterated that handling and protecting the wreckage after its recovery was the responsibility of the insurance companies tied to the two planes.

"Recovery, transportation, and storage of aircraft involved in accidents is the responsibility of the aircraft owner, who in this case is represented by the insurance company," said NTSB spokesman Terry Williams in a statement to KREM. "After an initial examination, it is part of a standard process by recovery personnel that wreckage be placed in large containers or on trailers for transport to a secure facility for storage and additional examination if needed."

Williams added that an NTSB investigator was present when the majority of the wreckage from both planes was being recovered from the lake. The investigator conducted an initial examination of the wreckage and documented its condition before the debris was placed in containers.

"We regret any additional distress these images may have caused the families and friends affected by this tragic accident," Williams said.

The Kootenai County Sheriff's Office also said that it was the responsibility of the insurance company to handle the wreckage.

"The insurance company should have hired a security company to guard the planes but they did not, so at night the Sheriff’s Office had a Deputy stay there on Overtime," said KCSO spokesman Lt. Ryan Higgins in an email to KREM. Higgins added that KCSO sent deputies to the Loff's Bay boat launch "on occasion" during the day as well.

Higgins said it was unknown if any members of the public had taken plane debris from the container at any point.

Higgins had previously pointed out that the boat launch was closed with visible signage in place. Additionally, the containers holding the plane wreckage had "no trespassing" signs on them. Members of the public chose to ignore the warnings, he said.

Neither KCSO or the NTSB said they were immediately at liberty to disclose the insurance companies associated with the two planes involved in the accident.

The Sheriff's Office had previously confirmed that North Idaho Maritime, a Coeur d'Alene-based waterfront construction company, had been contracted by the insurance companies to perform the recovery work.

When contacted on Tuesday, the company questioned scrutiny surrounding the storage of the wreckage in the aftermath of its recovery and accused KREM of attempting to sensationalize photos showing people swimming by the containers.

"Do you make stories out of the street getting wet when fireman are putting out a house fire?" said John Condon of North Idaho Maritime when he initially responded to a message from KREM seeking comment. "I think it's pretty clear you're trying to make a story out of something that shouldn't be made a story out of."

Condon went on to explain that North Idaho Maritime took "necessary means" to recover the wreckage from the lake depths.

"Tell me a better way to do it because you've got a lot experience with such, don't you?" he asked rhetorically to a KREM reporter over the phone.

"My people were in great danger. We had a hell of a hard wreckage to recover. We handled that as best we could," Condon said.

He added that the wreckage was placed in "enclosed roll-off boxes" because that was the only way to handle the challenging material.

"[The victims] were all handled with the utmost respect," he added. "We had a wad of wreckage that was not typical when you have a midair collision that then proceeds to fall into 130 feet of water and has to be recovered and placed on a barge."