A year after Cooper Court: Are Boise's homeless any better off?

It has been almost a year since Boise's tent city, "Cooper Court," was cleared out. A year later, the problem of homelessness in Boise isn't as visible - but it is still there. 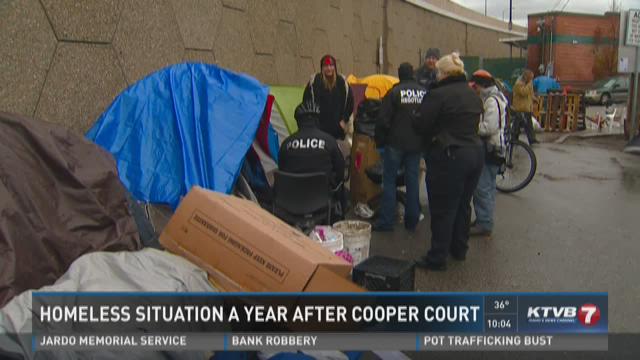 BOISE -- It has been almost a year since Boise's tent city, "Cooper Court", was cleared out. For the latter part of last year, a sprawl of tents would greet drivers as they entered downtown Boise on the Connector.

More than a hundred of our city's homeless called the encampment home, but Boise's mayor and police knew it was a dangerous and unhealthy situation. So one morning in December of last year, the City of Boise removed every camper out of the area. They set up resource tents on River Street, and helped displaced residents figure out their next steps.

A year later, the problem of homelessness in Boise isn't as visible - but it is still there. KTVB spoke with key players involved in the issue to find out: Is the homeless community here any better off? And where does the city stand in finding solutions?

"It's shocking that it's only been a year, quite honestly," Interfaith Sanctuary Co-Director Jodi Peterson said.

A year after Boise city officials called for the removal of residents in Cooper Court, much has changed. But much has stayed the same.

After construction began and fences were put up at Rhodes Skate Park in the summer of 2015, the city's homeless migrated from that spot under the overpass to the area behind Interfaith Sanctuary Homeless Shelter. There, they set up camp.

"A camp is a very bad answer to a very tough problem," Mayor Bieter said.

Since the disbanding of the tent city, the homeless community may not be as visible to us now, but according to the Point-in-Time Count from January of this year, there are still around 125 unsheltered and 742 sheltered homeless people in Ada County. That is up 15 percent from last year.

You can find some who don't spend their nights in shelters back under the overpass near Rhodes Skate Park. Others are spread out across the city, near the shelters downtown, and along the river.

"You never know where the rest of us are going to be," Sletto added.

Sletto tells KTVB after leaving Cooper Court, some of her friends headed out of town or went to family and friends' houses.

"Cooper Court was a very important turning point for how homeless is looked at and what needs to happen for our homeless community," Peterson told KTVB.

Peterson says the displacement identified those who are shelter-resistant, meaning people with mental or physical disabilities. She says it also identified those who don't want to be in a shelter or follow rules, and it determined who those people were that needed to stay together as a family.

MORE: Homeless shelters not a solution for tent dwellers

"This is a societal problem, we all know that," Mayor Bieter said.

A problem caused in part by the economic downturn, City of Boise research shows, and here in the Treasure Valley is in part a result of the lack of affordable housing and low vacancy rates.

"If homelessness is the problem, a home is the answer. Not a shelter, not temporary things, but longer-term answers that really get to the heart of the problem," Bieter told KTVB.

Boise's long-term solution is Housing First, something that Peterson and the rest of Interfaith Sanctuary staff say they fully support.

An unprecedented effort in Idaho, Housing First has been in the works for a decade and is a success in several other cities across the country, like Houston and Salt Lake City.

"We know that the people who we serve, many of them will not be able to be served until the Housing First model actually exists," Peterson added.

A coalition of eight local nonprofits, corporations and governmental agencies stepped up to make "A New Path" housing project happen in Boise.

"We've been able to channel not just our time and resources and energies, but the community's toward positive results that really help the issue of homelessness fundamentally," the mayor said.

The 40-unit project proposed for this site at 23rd Street and Fairview Avenue will provide permanent supportive housing, geared toward about 150 chronically homeless in Ada County.

"We have the possibility of cutting that in half or better," Bieter added.

The project will provide a safe place for the city's most vulnerable citizens to live, and includes the services they need to make them stable. Next, Bieter says the goal is to add dozens more supportive housing units scattered throughout the city. But, he says, they can't take this effort on alone.

"It's everybody's problem. It's not a governmental problem, for the business community to solve, or nonprofits to solve. It's for all of us to solve."

Ground-breaking for "A New Path" housing is set for the spring.

Mayor Bieter tells KTVB that this project would likely not have come to fruition without research from Boise State University. It found the chronically homeless cost our community at least $5.3 million a year in services, medical and criminal justice expenses.

Research shows the estimated cost of providing this permanent supportive housing is about $1.6 million for 100 residents each year.