#8cantwait highlights eight techniques which organizers say will decrease incidents of violence between police and the public. 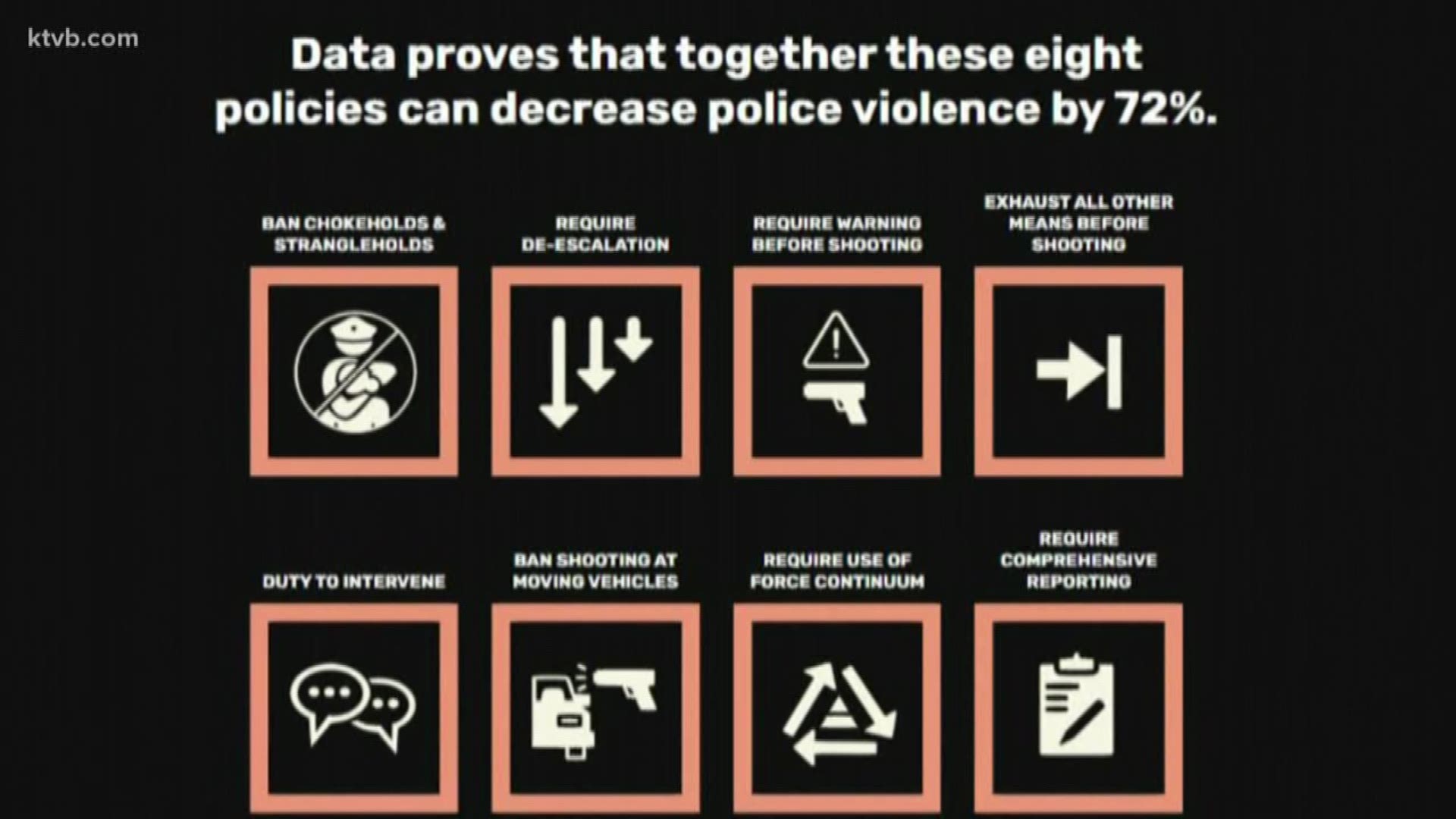 BOISE, Idaho — From Ariana Grande to Oprah, some celebrities have been using the hashtag "8 can't wait," after the death of George Floyd.

Activists Campaign Zero launched #8cantwait based on its 2016 study that examined the use of force policies of 91 police departments in 100 of America’s largest cities. #8cantwait highlights eight techniques which organizers say will decrease incidents of violence between police and the public, by as much as 72 percent.

Those eight policies include: banning choke holds and strangleholds and requiring de-escalation.

He says out of the eight policies listed, the department already has six in place. The department does not require use of force continuum or ban choke holds.

“Those control holds have been proven when properly utilized to be very, very effective and not damaging to individuals,” Basterrechea said. “Those holds are used every day in judo gyms and jujitsu gyms with no injuries to anybody, no deaths.”

He adds, there are also reasons why some agencies are not accepting of certain policies.

KTVB also reached out to Boise Police to get their stance on the social media campaign.

“What some people forget sometimes is our first level of force is our presence and that's the only force we ever want to use,” said Boise Police Department Lt. Matt Bryngelson.

He said BPD also has six out of the eight policies already in place.

“Police across the country, we all want to do our best job, this is a hard time for us,” Bryngelson said. “We don't want to be us versus them, we just want to be a part of the community that has a specific job that sometimes is dangerous.”

Basterrechea told KTVB it all comes down to training and holding officers accountable, not the policies in place.

“Any use of force can be misused and you can’t just take a way every tool an officer has that is going to save their life because somebody else has misused it,” Basterrechea said. “If you go out and you hire good people, you're going to make them become or be good police officers.”

He adds one thing that has always concerned him is that when there are budget cuts in certain cities or areas, the first cuts they make are in training and he says that cannot be happening because that's what gets police agencies, as well as cities, in trouble and puts our citizens' lives at risk.

Meantime, Bryngelson says those eight policies listed are just a small portion of policies that police departments can use.

At BPD, their policy manual is 220 pages long and they re-evaluate that manual every year, according to Bryngelson.

RELATED: 'My city standing with me,' Boise man proud to take part in peaceful vigil