73 years after D-Day, history lives on at Warhawk Air Museum 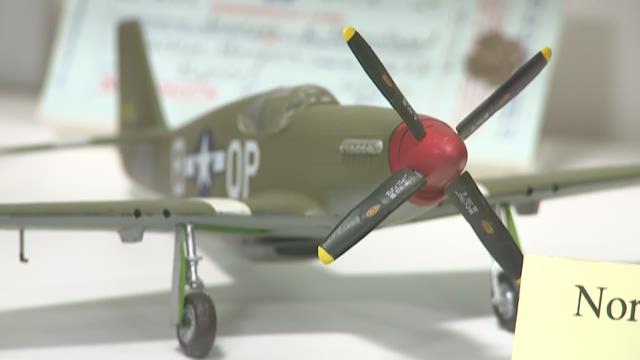 NAMPA -- Seventy-three years ago, a pivotal point in World War II: D-Day. It was the beginning of the Battle of Normandy.

June 6, 1944 went down in history as the day the Allied forces gained a foot-hold in continental Europe, turning the tide against the Nazis and eventually defeating our enemies. Blood was shed and the death toll was high, but today, we remember the sacrifice our soldiers made.

Code-named "Operation Overlord", the Battle of Normandy marks one of the largest - if not the largest - amphibious attack in history. Those who served on that front, from the sky and in other battles throughout history are represented in the Warhawk Air Museum, a place where history lives on and personal tales are told.

"D-Day was the beginning of the end insofar as what happened to Germany," said Lou Bauman, an archivist at the museum.

On that historic day, nearly 160,000 American, British and Canadian forces landed along a heavily fortified, 50-mile stretch of coastline in Normandy, France to take on Nazi Germany.

"It was the only way to get ashore, basically," Bauman said. "And it was time. There was a big pressure from the Soviets to do something on that front."

Pilots' and soldiers' stories from that day 73 years ago are still being told at the Warhawk Air Museum.

"If they're here, they're a part of history and they are history," Bauman added.

Several displays among the sprawl of planes, flags and glass cases contain the stories of World War II veterans through memorabilia such as pictures, uniforms, diary entries and logs.

"What we try to do here is tell the story about the people behind the memorabilia," Bauman said.

Most of the cases hold the memory of servicemen from Idaho.

Bauman read a diary entry from David E. Haggard, a glider pilot from Boise who served in Europe in World War II and whose wife brought the museum a plethora of her late husband's memorabilia.

"June 4th - this is prior to D-Day," Bauman read. "'Been attending the briefings all day and things are going around in my head like mad. I've had many thoughts of home and what the outcome will be. God, I hope it's OK because I'm scared and not ashamed to admit it.' Then he goes on 'and another stand-by on June 6th.' He didn't ever get off. Then they worried about the boys in their group whether they lived, didn't live.

"There's a number of local boys that flew in Europe and some didn't come back," Bauman added.

General Dwight D. Eisenhower called "Operation Overlord" a crusade in which "we will accept nothing less than full victory".

As one of the largest amphibious assaults in history, the invasion required extensive planning. In the months and weeks prior to D-Day, the Allies carried out a large-scale deception operation designed to mislead the Germans about their intended invasion target. Archivists document many tactics were used to carry out the deception, including fake equipment, a 'ghost' army commanded by George Patton supposedly based in England, double agents and fake radio transmissions.

Eisenhower planned on carrying the invasion out on June 5, 1944, but due to poor weather, it was delayed. According to archivists, a meteorologist predicted improved conditions for the next day, so Eisenhower gave the go-ahead for the operation.

"Anyway when they did land, we made it through. And again, it was a high cost," Bauman said. "Some of the waves were pretty bloody, not all of 'em but some were."

A critical point in the war and in history, D-Day began the liberation of northwestern Europe from Nazi control and resulted in the Allied victory.

"Our boys from World War II - my mentors in my life - they're passing away. There's not that many left," Bauman said. "Definitely the personification of the words duty, honor and country."

His words are a reminder to honor and respect our veterans no matter how distant their sacrifices may seem and no matter how much time has passed.

According to some estimates, more than 4,000 Allied troops lost their lives in the D-Day invasion and thousands more were wounded or missing.

If you want to read about these stories firsthand, visit the Warhawk Air Museum in Nampa.