VERIFY: No, people who move to Idaho aren't turning the state liberal

Data analyzed by KTVB shows that yes, there are more registered Democrats in Idaho in recent years, but the GOP has seen their party grow by more than 200,000 voters. 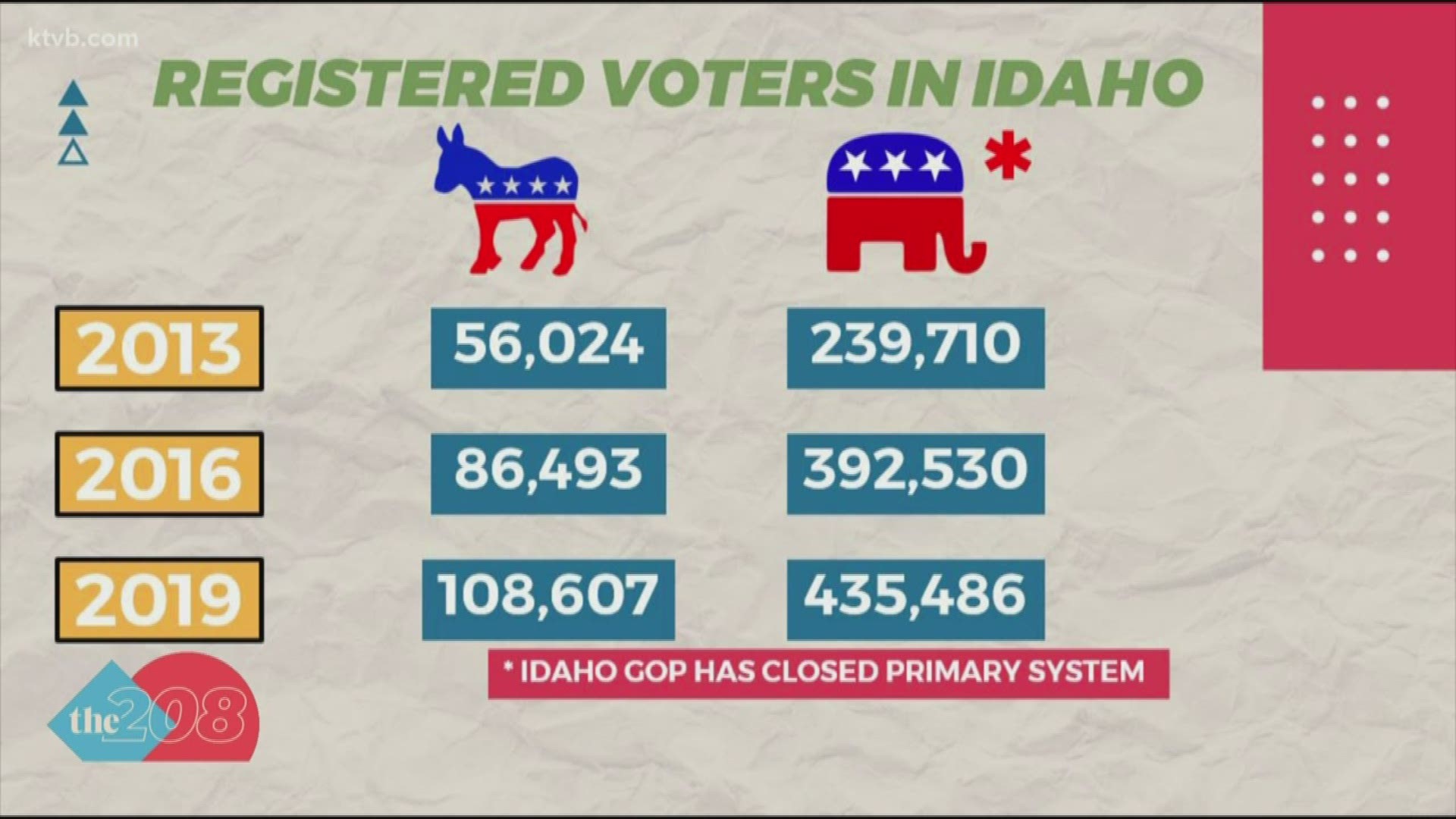 BOISE, Idaho — Idaho is one of the fastest-growing states in the country, but that population growth is not moving the needle towards the left on the state's political landscape - it's only cementing the Republican majority in the state.

Discourse in the comments section of social media posts on local politics can quickly turn to blaming newcomers for varying issues.

One of the most common types of comments from Facebook users is that new Idahoans, people from California more specifically, are all liberal and are turning Idaho more Democratic.

KTVB set out to verify those claims by looking at data of registered voters and election results from the last four elections, including two presidential cycles and two elections for Idaho governor.

However, the data doesn't support claims on social media that Idaho's politics are turning blue - it shows that Idaho is becoming even more conservative.

The data is collected by the Secretary of State's office, all available data can be found here.

That same year, Democrats only made up 7.6% of registered voters with 56,024 people.

Registered Democrats grew to 108,607 voters, making up 12.7% of all registered voters in Idaho.

So yes, Idaho is seeing more Democrats become registered voters in recent years, about 52,600 more over a six-year span. But Republicans have seen their number of registered voters grow by nearly 200,000 during that same time.

WATCH BELOW: Boise State professor breaks down the 2018 election results

For election results, we're just looking at the governor's race and the presidential election, as they're the largest state-wide races in each of the elections analyzed.

In 2012, about 666,300 people, a turnout of 74.34% of registered voters, voted in the presidential election between incumbent President Barack Obama and Republican nominee Mitt Romney.

Voter turnout was down significantly in 2014, compared to 2012. Only 56.1% of eligible voters came out on election day.

Turnout rebounded in the 2016 presidential election between Republican nominee Donald Trump and Hillary Clinton, the Democratic Party's nominee. 75.87% of eligible Idaho voters turned out on election day, giving Trump a landslide victory. Trump won 59.2% of the vote in Idaho, beating Clinton by 219,290 votes - she only received 189,765 votes in Idaho.

Last November's election was another sweeping election win for Republicans as then-Lt. Gov. Brad Little beat Democratic challenger Paulette Jordan with 59.8% of the win, a plurality of 130,530 votes.

Comparing the 2018 and 2014 governor's race highlights how many more people are voting for Republicans as Little received 126,256 more votes than Otter did.

All election results and data were compiled by the Secretary of State's office and that information can be found here.

No, Idaho's population growth is not turning the state's politics more liberal or blue.

Between data on registered voters and election results, the GOP's majority is growing at a much faster rate than the Idaho Democratic Party and Republicans are winning elections by larger margins now than they did years ago.

It is important to note that the Idaho GOP has a closed primary system where only voters registered with the party can vote in their primaries. This does invite independent or liberal voters to register as Republican so they can participate in the GOP primaries.

In Nov. 2013, 38.2% of registered voters identified as Republican, while registered Democrats made up 7.6% of voters.

The number of registered Republicans in Idaho has grown by over 206,000 in the last six years and there are only about 52,000 more registered Democrats in Idaho.

These changes show that the state's population growth is only leading to an increasingly Republican-leaning Idaho.