A gas company lobbying group is pushing a bill that would curb the state's power to investigate price gouging during an emergency. 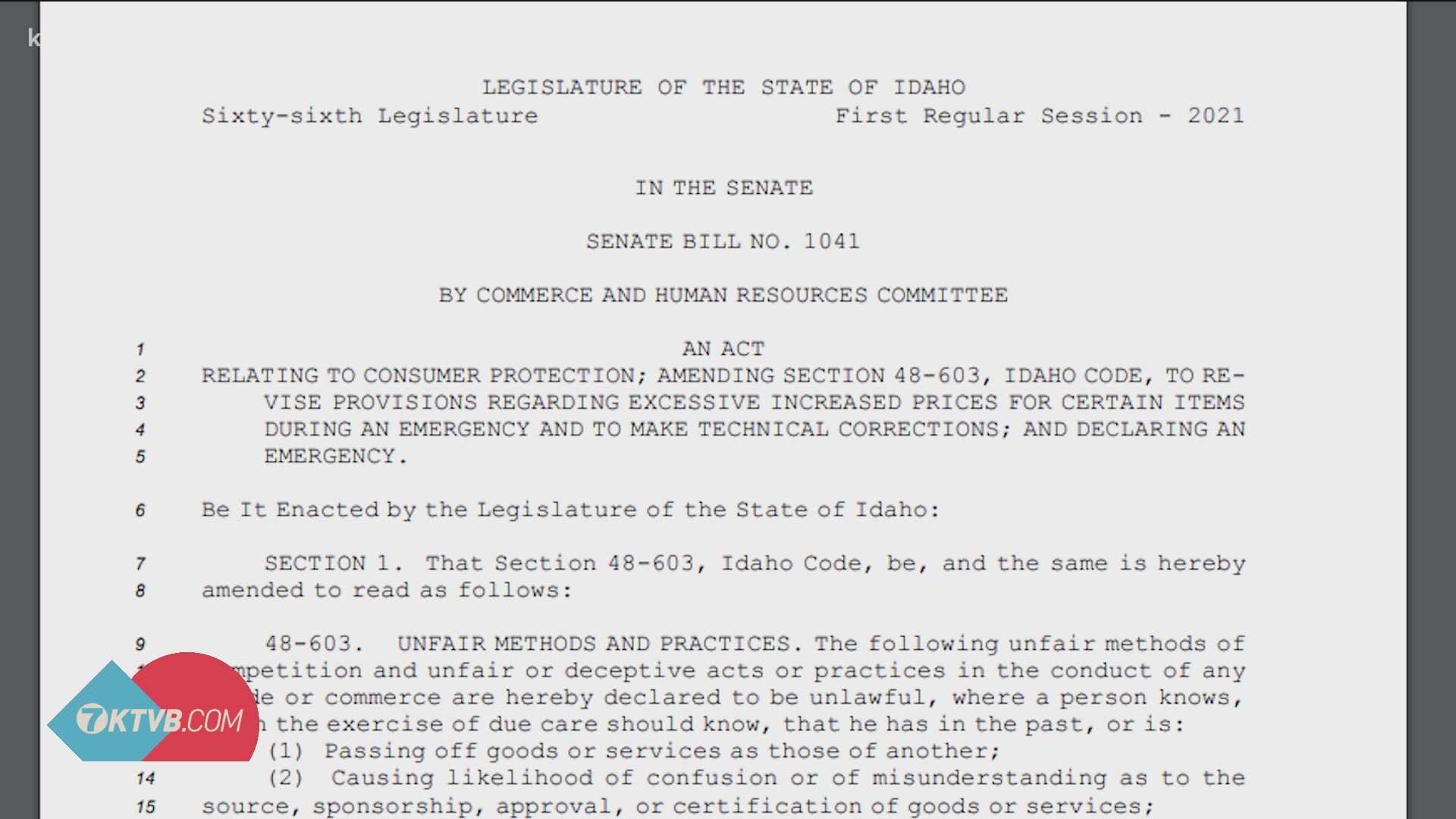 BOISE, Idaho — Gas prices in Idaho have increased 20 cents in the last month, the largest increase in the country. In the Treasure Valley, the increase was as much as 34 cents a gallon higher than the cost at the end of 2020.

The increase is related to the increase in the price of a barrel of oil, which has increased $12 since Jan. 1.

The rise in gas prices is concerning to Idaho's lawmakers. As a result, another pandemic-related bill is making its way through the Legislature. It also involves limiting what can be done by the state's executive branch during a declared emergency.

Last spring, as the state was in the early stages of the COVID-19 pandemic, Idaho's Office of the Attorney General investigated the price of a gallon of gas. This was done based on the state's price gouging law that is immediately triggered during an emergency declaration.

The office looked into Idaho's three largest gas retailers and found their profit margin was more than 60 cents per gallon. That margin is typically about 10 cents per gallon, according to Idaho Attorney General Lawrence Wasden.

Retailers settled the case for $1.5 million last November, but those same retailers are now looking at the profit margins.

A bill sponsored by Sen. Jim Guthrie (R-McCammon) would limit the scope of those investigations, should Idaho enter another state of emergency. This inspired Wasden to write an opinion piece offering legal opinions on the legislation.

Before Gov. Little declared a state of emergency, the difference between wholesale and retail gas prices was about five to ten cents per gallon. Within several weeks of the declaration, the difference increased to nearly 60 cents.

For this reason, Delagne feels Wasden put out this op-ed to make consumers aware of what protections they could lose with this proposed legislation.

"We're in the middle of a pandemic, why would the legislature want to make price gouging easier?" he said. "When there's an emergency in place, we don't want businesses with four core items, food, fuel, pharmaceuticals and water, to take advantage of that."

"The thing about our industry is that it's so different. We have a lot of rural gas business, and that's a lot of what we service in our area, and they were hurt dramatically from all this," he explained. "In terms of fuel sales, margins needed to increase in order to remain open as an essential business."

With a bill like this one, people may think it is a special interest, according to Berry. However, he added the main objective of legislation like this is to protect the business and employees.

"We don't look at it in terms of this is a special interest opportunity for us to push an agenda," Berry said. "This is us wanting to be able to protect our business and employees and make sure that we can survive in it in a situation like this. To be dictated you can only make a certain margin during a time of loss in your business, it's pretty hard to make ends meet and still be considered an essential business to stay open."