Police Chief Alan Takeuchi said he was not aware of any real threat to people's guns and could not name a time when it actually happened. 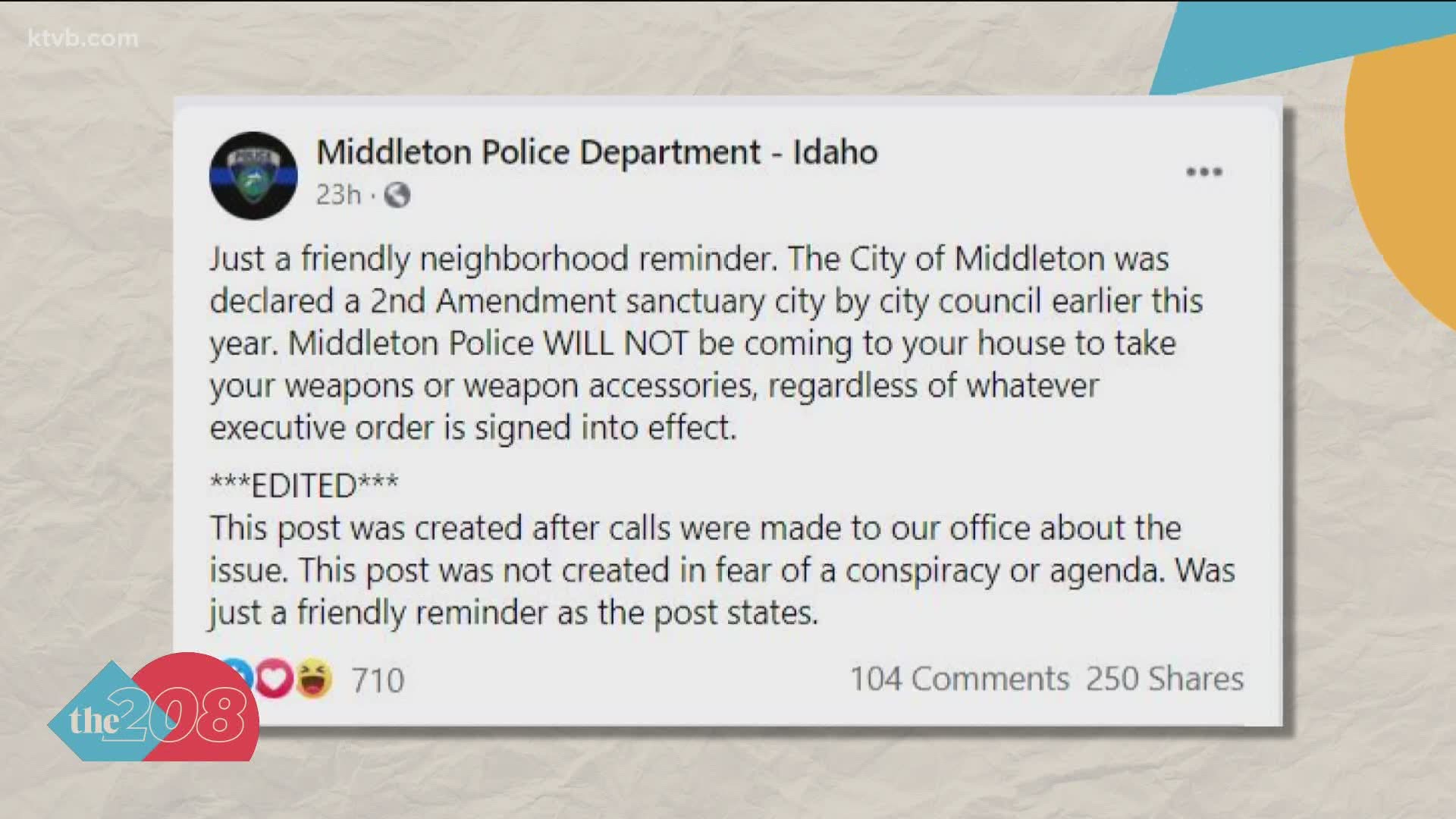 MIDDLETON, Idaho — The Middleton Police Department issued a "friendly reminder" to the citizens that it serves that officers won't be coming to anyone's home to take away their guns, even though there is no legal action from state or federal governments that would encroach on anyone's Second Amendment rights.

The Facebook post was created prior to President Joe Biden's executive order on Thursday that declared gun violence a "public health epidemic." Biden requested the Department of Justice to create stricter rules for so-called "ghost guns," guns that are made at home and lack traceable serial numbers, and make model "red-flag laws" for states to follow. He also asked the DOJ to clarify when a pistol becomes a rifle with the addition of a stock or stabilizing arm brace.

Biden also called upon Congress to do more, like issue a ban on assault-type weapons again and limit high-capacity magazines.

No part of his executive action actually restricted anyone's Second Amendment rights, but the Middleton Police Department glanced over that fact when they first told residents that they wouldn't be taking anyone's guns away and stoked fears over government overreach.

Middleton police later edited their post to clarify that they weren't trying to create fear of a conspiracy or pushing an agenda. They said they made the post after people started calling about it.

Middleton Police Chief Alan Takeuchi told The 208 that they were just trying to get ahead of Thursday's announcement.

"We wanted to remind everybody that Middleton city council had agreed to have Middleton become a Second Amendment sanctuary," he said.

Chief Takeuchi added that he does not know of any real threat to American's right to own a gun or of a case of it ever happening in the United States.

Currently, there are eight cities and multiple counties that have declared themselves a Second Amendment sanctuary. But with the Second Amendment, the declarations aren't likely to hold legal weight so they function more as gestures than policy.

As Idaho Governor Brad Little and the state's Congressional delegation made clear, any possible infringement on Second Amendment rights is so far from taking root in reality that the governments that declare themselves Second Amendment sanctuaries might as well declare themselves Santa Claus sanctuaries since neither could carry the weight of the paper it was printed on.