When the COVID-19 pandemic hit, everything changed. Mayor McLean, however, maintained that the pandemic would not sidetrack her from her goals. 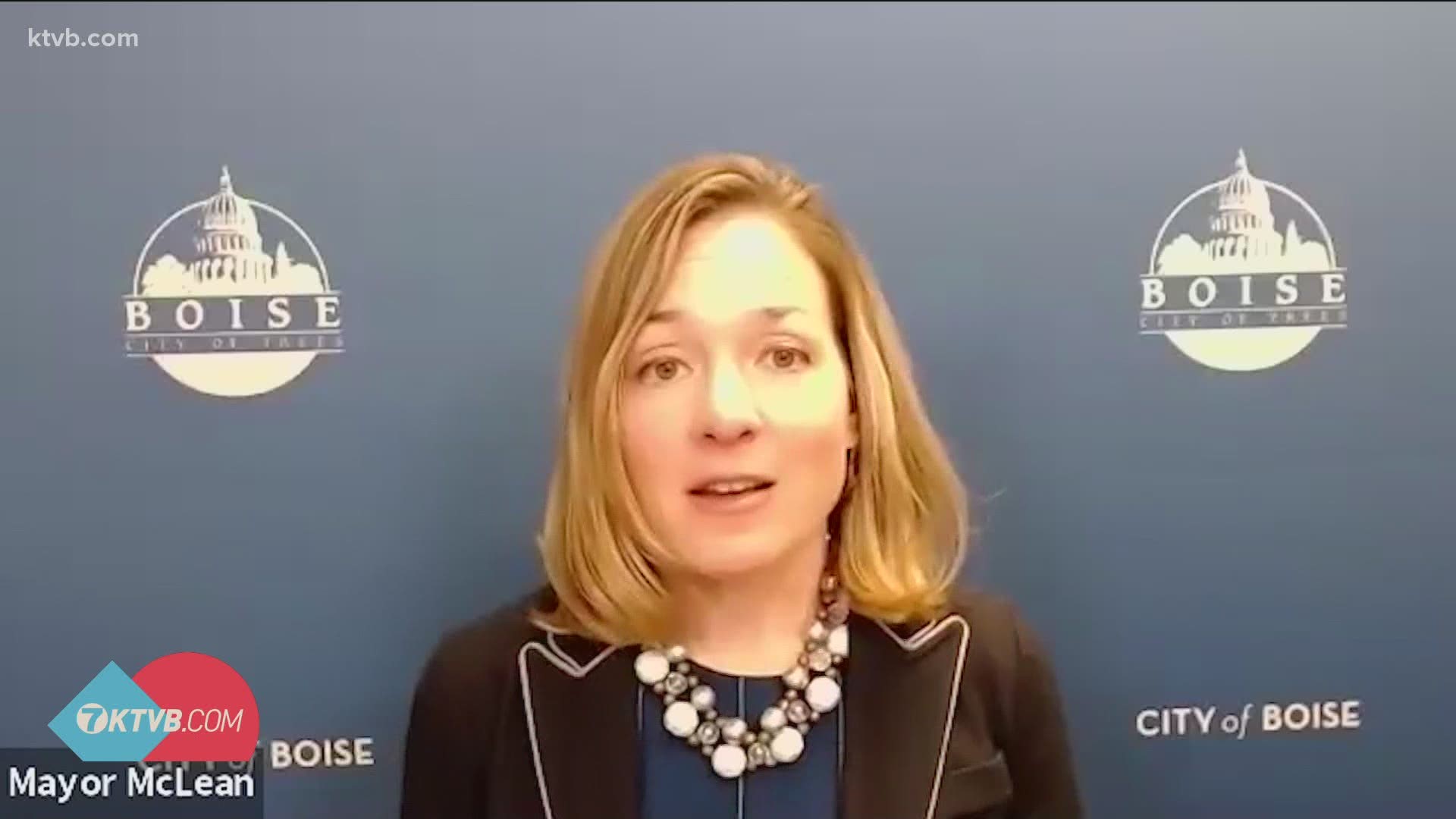 BOISE, Idaho — Just over a year ago, on Jan. 7, 2020, Boise's Lauren McLean was sworn in as mayor, becoming the first woman elected to lead Idaho's largest city.

Like many in their first year of office, McLean was eager to guide the city of Boise into an economically encouraging, clean-energy committing and housing affordable future.

When the COVID-19 pandemic hit, everything changed. Mayor McLean, however, maintained that the pandemic would not sidetrack her from her goals.

Now, she has finished her first year of what she hopes will be her first term as Boise's mayor.

"Despite the obstacles that this community has faced in this last year, my belief, that I had that night being sworn in, was that we needed to try new ways and with new urgency to support affordable housing, that we must create regional partnerships that tackle the biggest issues like transportation, and we've got to look at how we create more opportunities for our residents more important today than it was a year ago," McLean said.

Working on transportation has been more difficult than anticipated, according to McLean, due to the need to grow a regional transportation system. To make progress on this goal, McLean reimagined the way Boise addresses mobility.

"We launched the Canal Pathway Plan. Just like the Greenbelt started 50 years ago with a plan, we want to make a plan for how we acquire easements along canals so that people can move from the farmlands all the way to the Foothills," she said. "It's not only important to get to work in a different way, but we learned in this pandemic how important it is to have more open space available to people."

In her efforts to combat climate change, McLean would like the city of Boise to be completely carbon neutral by 2035. The city has invested with the beginning of an incubator with Boise State University, the Department of Energy and other businesses to look at energy innovation to help the city meet its clean energy goals.

"That matters to me because as power becomes more expensive, the impact of climate on our water, our farms, our energy, our community as a whole starts to lay true, and our residents will feel that financially as well as from a health perspective," McLean said.

While working on her goals for the city, McLean and the city have been forced to navigate the unprecedented COVID-19 pandemic. Some of her policies have caused controversy in the community, but she said her decisions have always been made with public health as her top priority.

"When I came into office a year ago, the last thing on my mind was having to deal with a pandemic. And we were called on by the state at the local level to make decisions," she explained. "We led as a city in instituting first, restaurant and bar closures, and then partnering with the governor during his own stay at home order and then opening our city in smart ways."

Like many of us, McLean is more than prepared to leave 2020 in the past.

"This year was incredibly difficult for all of us, bigger than we knew we could be," she said. "Our actions impact others. I wish we could go back, but we can't, and I know we will come out stronger for this in the long run."

According to Boise's COVID-19 enforcement page, 141 local businesses asked for help in dealing with customers who have refused to follow the face-covering mandate.

There have been four citations and one arrest, all in early December. There have also been 99 total businesses inspected by the city following complaints of breaching the rules. None have had their business licenses suspended.

Some businesses were forced to close their doors permanently due to the pandemic. Boise has $1.5 million in grants available to keep local businesses open, but the city received applications in excess of that amount, according to McLean.

She is hopeful that another potential stimulus package where more money would be available to states would offer more assistance.

To watch the full interview with Mayor McLean, click below: