Should controversial school mascots be put up for a vote?

One state legislator is floating the idea of having a vote when Idaho schools are considering removing a mascot. 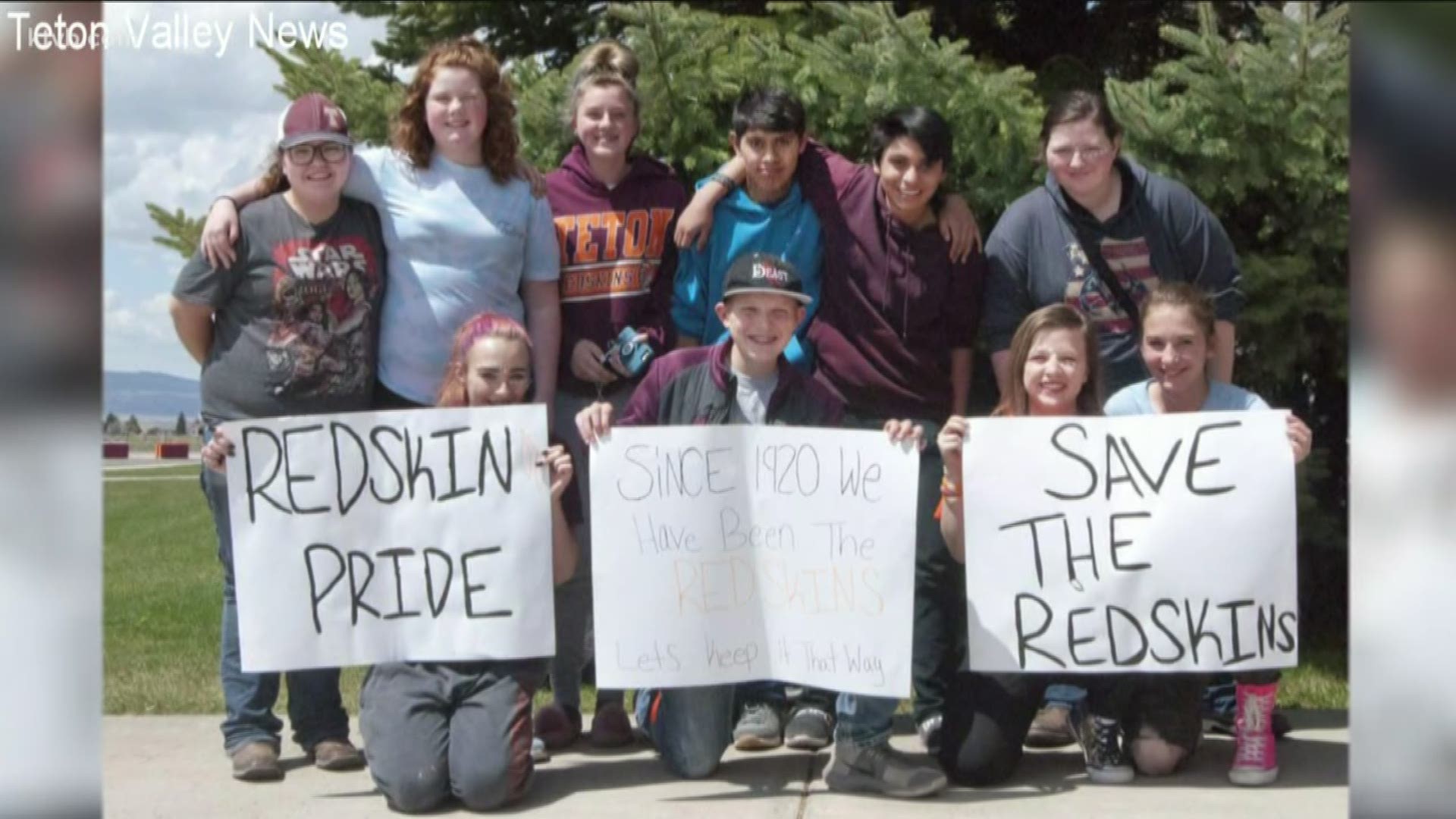 BOISE, Idaho — Should changing the name of a high school mascot be put up to a public vote?

One Idaho legislator is exploring the option with a potential piece of legislation.

On his Facebook page, Rep. Chad Christensen, who represents Teton County, says this is in response to the Teton School Board abolishing the Redskins mascot in 2019.

He adds that “the bill is still very much up in the air. I am not sure I want to make any definite statements yet.”

Christensen is not shy in explaining why he is taking a look at options.

Through an email thread, KTVB asked him - why do you feel this is necessary now?

He responded saying, "My constituents in Teton County want their heritage and traditions protected. They argue that this has been in honor of the Native Americans for over 100 years. They have a rich history of peaceful relations with Native Americans in the Teton Valley."

Teton High School Principal Samuel Zogg says the controversy over changing the name is a big one, and a lot of time has gone into working on it.

"I've spent way too much time on it, there are way more important things, but to some people, this is most important so we have to take it as important," Zogg said.

Zogg adds that he has not talked with Rep. Christensen about the potential legislation, but that some students have had small demonstrations in recent months.

"There was a student walkout, about 10 students walked out of class,” Zogg said.

The third-year principal says the high school is planning on having a new mascot to replace the Redskins by the start of the next school year.

Christensen said in a Facebook post this week, "There is an agenda to destroy local heritage, so long-time residents no longer have an identity and so generational traditions become extinct. I would like this authority to remain local, but require a vote amongst the citizens."

How much money would it cost to make the change?

The Teton School District says they believe it would be a one-time cost, estimated at about $30,000 to remove and replace district-provided signage and equipment, including athletic uniforms.

Rep. Christensen couldn't detail just yet on how voting on the name changes would work.

In August, the Boise School board unanimously opted to change Boise High School's mascot from the 'Braves' to the 'Brave.'

The Boise School District previously said the change had been years in the making, and the purpose of it is to be more respectful to Native Americans.

“Boise High Brave is a character trait. It is a reflection of what we ask of our students and teachers every day,” Boise High Principal Robb Thompson said in a statement. “With the adoption of Brave and it’s simple, yet powerful, call to action, this is the final step in a multi-year process to move Boise High’s mascot away from a caricature of Native American culture to one that more faithfully represents the school’s vision and core values.”

In 1941, Riggins High School opened with the mascot Buckaroos.

Sometime in the mid-1950s, the student body decided they wanted to change their mascot to the Savages.

According to current Athletic Director Paula Tucker, the term "Salmon River Savages" was originally used to describe the white people that lived along the Salmon River.

At the time, the area was isolated and wild (or savage), and its inhabitants considered uncouth, uncivilized rednecks.

Some residents were even referred to as "Cedar Savages," as a majority of the population worked in the logging and sawmilling industry.

In the 1980s, Tucker says the student body worked with the Nez Perce Tribe from Lapwai to change the mascot from the Indian to the white horseman.

She says the tribe actually paid to have the mascots painted on the gymnasium walls.

Within the last few years, Tucker says a Nez Perce tribal elder spoke at a home basketball game and thanked the school and community for their sensitivity in making that change.

Sometime between 2000-2001, the Salmon River High School ASB chose to change its logo to its current rendering.

The school says the Nez Perce Tribe backed their decision to keep the Savage name and logo.

The club met on an infrequent basis at which time they would have a potluck dinner and various members would provide entertainment. I don’t know how long the club existed but I don’t think it was much past 1959 or so.”

“ In 1954 or 1955 that School year our Student body wanted the name changed from The Buckaroos to Savages. At that time there were only 3 or maybe 4 actual Buckaroos so the Student Body voted to change to Savages and at that time the whole area of people was kind of known as Savages, had nothing to do with Indians, just simply a bunch of people. Later years the Savage Logo was made to look like an Indian, this should not be a problem in my mind at least as to me the Indians were a great people and to me, that is what the Savage Logo was meant to be there is no reason to me that would warrant a change.”

“My initial memories suggest that "Salmon River Savages" referred to the early people who lived along the Little Salmon River. It was a phrase we all heard growing up. The High School was renamed sometime after the class of "54" graduated.

Nobody that I have ever talked with has anything negative to say about our High School Mascot choice of names. Being a Salmon River Savage has always been something that I was very proud of and well continue to be”

“Sometime during the 1954-55 school year at a general student body meeting, it was decided by a vote of the student body that the mascot for Riggins High School should be changed from the Riggins Buckaroos to the Riggins Savages. The people who lived along the river were commonly referred to as Salmon River Savages. At the time a number of teachers and students were surprised the name was not changed to Salmon River Savages. It seemed appropriate for the name to reflect not only Riggins but also the Salmon River area where many of the high school population came from.

The change to Salmon River High School occurred sometime after we graduated. Possibly when the new high school was opened.”

“When the name was changed from Broncos to Savages it was in no way or has it ever been considered disrespectful to anyone. We did have a Native American type logo for many years, but it was worn and considered an honor to have on our letter sweaters along with the SR letter we received for athletic awards. The logo has now been changed to a new design to make sure our name made no relationship to Native Americans or any other nationalities.

We have been SR Savages for a very long time and I think it is a good name for us. A savage place is considered to be fierce, violent and uncontrolled. The Salmon River canyon has thousands of acres of wilderness areas, national forests, and two uncontrolled rivers flowing through it. Some of these areas are uninhabitable and are considered wild and the rivers definitely violent during spring run-off. Our school is in a very unique and small town that history will show, has always been very independent and taken on many challenges and losses to become the community it is today and have our own school district. The people that live here have a love for the way of life there and will do anything possible to stay there if at all possible. It takes a special person to live in the canyon. You have to have a love for the savage mountains, rivers, creeks, and canyons as well as the people that call it home. I think there is a little savage in all of us. Keep our name.”

At that time, their teams were simply referred to "Meridian Students" rather than "Warriors."

Dr. David Hansen, who is known in the community as a Meridian High School history buff, says the first documented use of a Native American mascot was in the school's inaugural yearbook called the "Mana Ha Sa" in 1920.

The name Mana Ha Sa is the name of an Indian chief who was noted for his ability to carry messages swiftly between the division of the tribes.

The initial letters are significant of Meridian High School."

In 1939, Hansen says the yearbook used the term "Warriors" for teams playing against other local high schools.

"We need to keep a perspective on mascots and the time period in which many were developed," Hansen said. "The MHS students of the 1920s, 30s, and 40s had lived, and survived, a devasting depression and two World Wars during which individuals were called to muster the courage and fortitude to carry on through unimaginable sacrifices so we could live in freedom.  They were true “Warriors” for those of us living today."