Boise businesses look to expand outside to attract more customers

Many shops in Boise are seeking to go beyond their front door to help bring in more business. 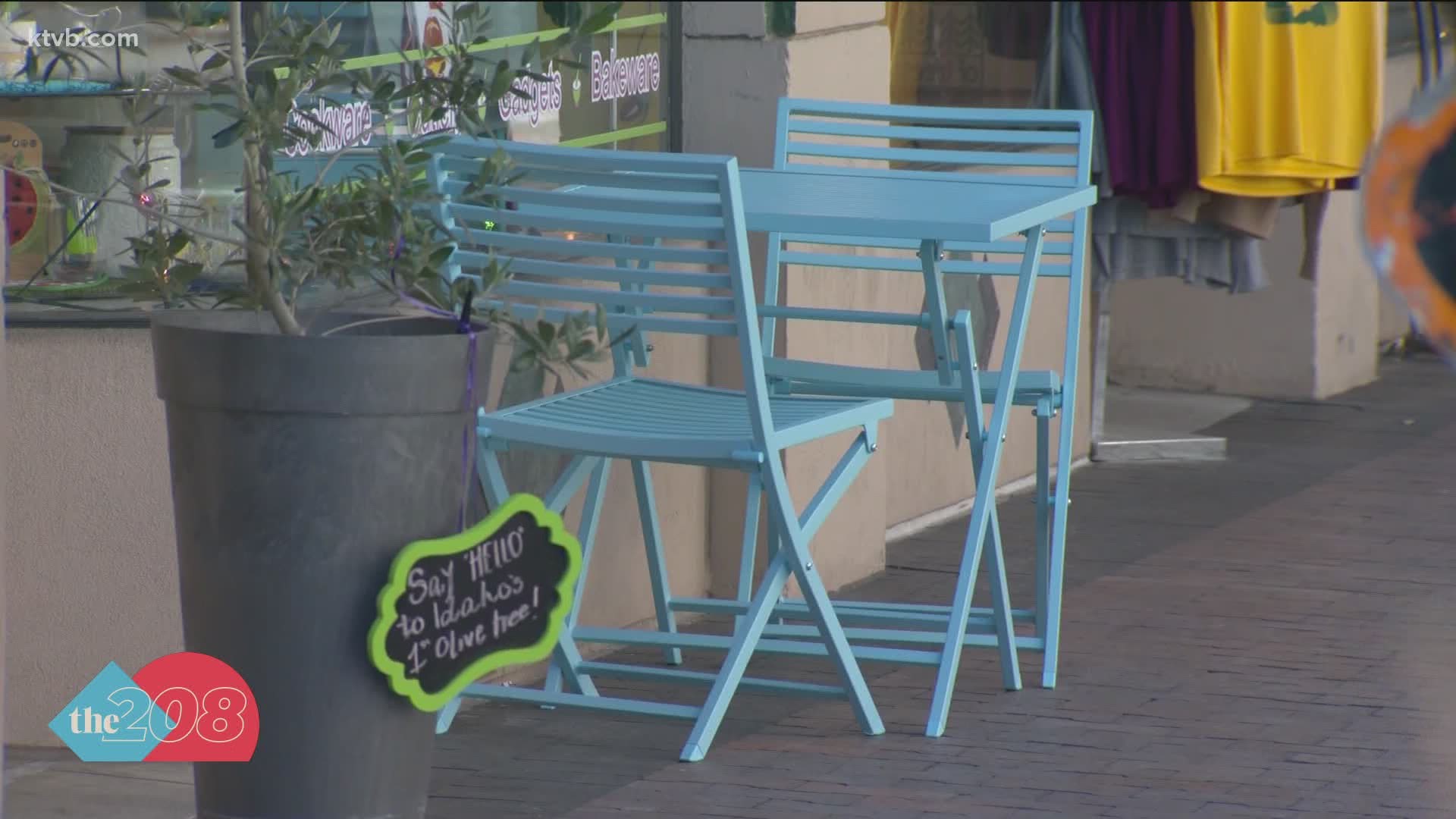 BOISE, Idaho — The debate continues over whether the COVID-19 pandemic has hit us harder from a health standpoint or an economic one.

Which one weighs heavier is certainly a subjective stance.

But no question, our economy and local business owners have felt it for sure.

Getting back on track has been the objective of city leaders and stakeholders since we've started opening the state back up.

People are less likely to head out, and when they do, they'd rather stay out.

As in outside and not go inside, if they can avoid it.

So business owners and the city of Boise have had to get creative when it comes to drawing customers in.

That's where patio seating and outdoor space comes in.

And it's not just restaurants.

Boise is now letting other types of retail reach out beyond their brick and mortar buildings.

Opening her olive oil and vinegar shop have made mornings for Mary Ann Mandel pretty much the same for the past four years.

But this morning is the first time opening means putting tables and chairs on her psuedo-sidewalk patio.

“Location wise the foot traffic is important especially for my little business,” she said.

Mary Ann has relied on that foot traffic as she got her feet under her as a first-time business owner in downtown Boise.

“And then by the end of last year I felt like I kind of had a handle on it,” Mandel said.

And then the wheels came off.

The COVID-19 virus seemingly shut everyone down in downtown.

She was able to shift to online service and Mary Ann says she used her savings to keep her employees.

But since being back open she hasn't seen the customers come back like before.

“Just two tables, we gotta fit within a six-foot radius and then there has to be enough room on the sidewalk for people to walk both directions,” she said.

For the last month or so the city of Boise has been talking about how to help downtown businesses get more business.

Allowing shops to step further outside their front doors was one of the options, something that has been happening on 8th Street for more than a month.

“8th Street was a natural first approach for this since the city owns the right of way and we own the public space around the patios so,” said Sean Keithly, Director of Economic Development.

Here they've made it more pedestrian and personal space friendly and pushed patios to the edge of the street.

“It's not like it's a new idea, we've been talking about how to use the public space better for a long time,” said Dave Krick.

He says this outside-the-box response has been about outlasting the pandemic by adding about a third more seating to his patios.

“But that just allowed us to space things out so we end up with about 40% of what our normal patio seating would be,” Krick said.

And outside is where people prefer to be.

“We estimate that they're probably adding about $100,000 a month in revenue to our bottom line, and that's significant,” Krick said.

But what about beyond this block?

Just last week the city started approving permits for other owners to follow the lead of restaurant row.

The delay has been about the process.

“We don't own the roads where any of these other patio expansions are happening so working with ACHD as a critical partner was ever more important and getting their support for that was a critical piece of moving this forward,” Keithly said.

Meaning maintaining sidewalk accessibility and accommodating those with disabilities, all while worrying about traffic is also a critical piece.

The city says they've had about 90 permit applications to expand.

Fifteen of those have already been issued including Olivin.

And sure, olive oil and vinegar tasting doesn't exactly lend itself to sidewalk seating. But by setting them out, Mary Ann hopes to bring business in.

“I'm hoping we have a great Indian summer and it stays warm and we'll keep it out as long as we can,” she said.

Sidewalk space is just one of the options the city approved last week. The other is parklets.

That's where a business can expand into the spaces on the streets, usually occupied by parked cars.

But the sidewalk expansion has been the preferred option by those who applied for a permit.

A contingent of the city clerk's office is meeting twice a week to get those permits approved, along with the help of the Ada County Highway District.

Krick hopes it will be a quick process because a lot of these businesses are fragile right now.

And there's no better time than a pandemic to let go of the rules as we know them, and possibly even rewrite them.

There is no firm end-date to these permits.

However, the city says they will reassess at the end of "patio season," with colder weather, fewer people will likely want to be outside.

But there is a possibility they could make these pivots a longer-term solution.