"I don't understand what these people are thinking," Mike Rogers said. "If you're pro-business, you're pro mask. It's the end of that story." 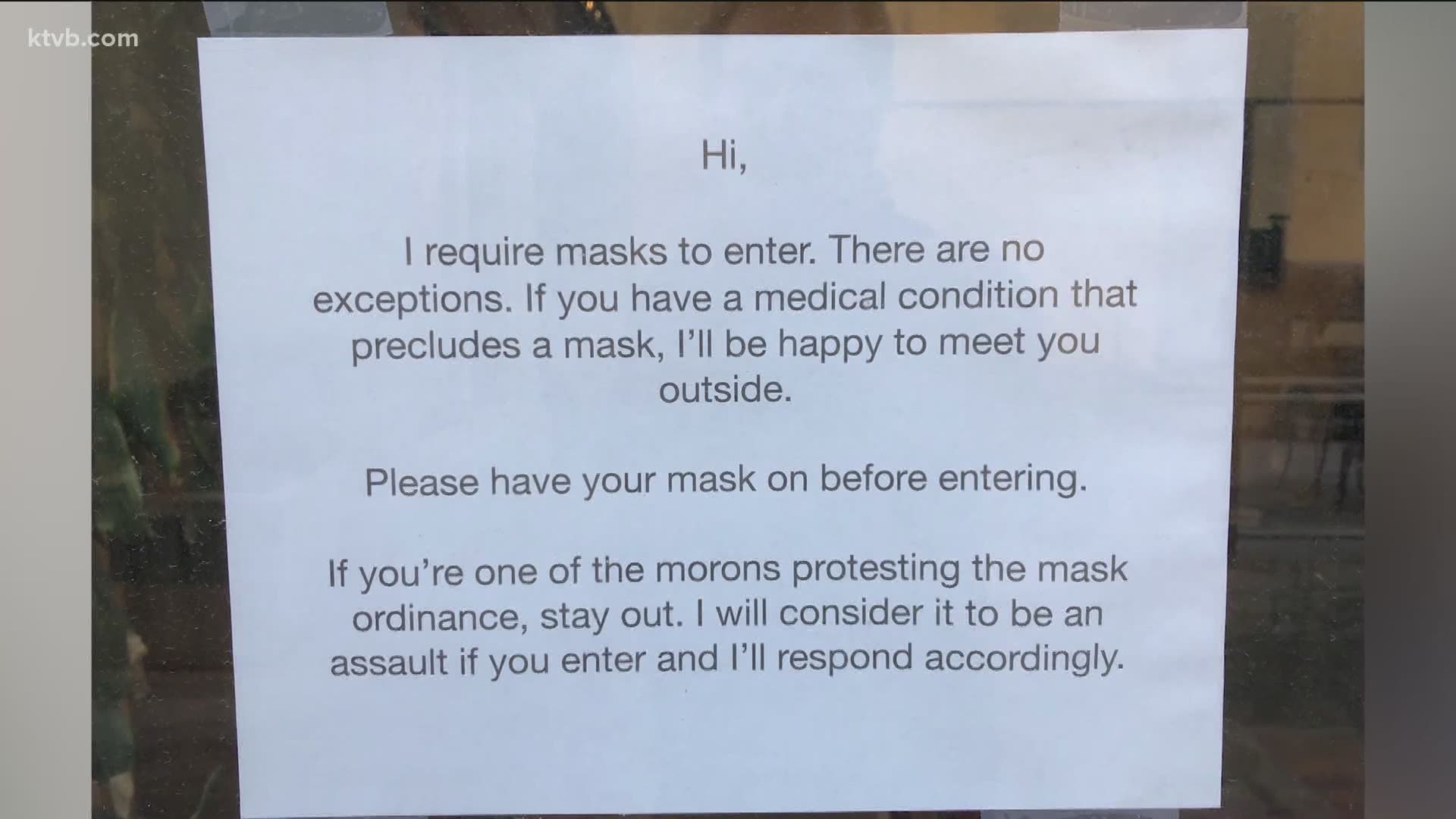 BOISE, Idaho — Over the weekend, a small contingent of protesters from the 'People's Rights Network,' which claimed to be a part of a civil rights mask movement, visited several stores in downtown Boise.

Witnesses said the group handed out flyers, claiming their constitutional rights are being violated under Boise's public health order, which requires everyone to wear a mask when out in public, among other things.

Mike Rogers has been a business owner in downtown Boise for 25 years. He makes custom jewelry in his shop, Precious Metal Arts, on Bannock Street.

Rogers said 2020 has been one of the worst years for his business, something he hasn't seen since just after 9/11, but that's nothing compared to what he saw over the weekend during Small Business Saturday.

"They were literally pushing their way into businesses, yelling at receptionists, just causing all kinds of havoc," he said. "These guys weren't buying anything, they were just trying to prove a point and disrupting local business at a time when we would really like to have some."

Rogers says his business wasn't targeted, but it gave him an idea to dissuade anyone who attempts to do the same thing in his store.

He taped up a sign on his front door that reads, in part, "I require masks to enter. There are no exceptions... If you are one of the morons protesting the mask ordinance, stay out. I will consider it to be an assault if you enter and I'll respond accordingly."

He also noted that if someone has a medical condition that precludes a mask, he would "happy to meet you outside."

I just put a new sign on my door. I’m really disappointed that it’s necessary. pic.twitter.com/vaFepEpKRX

"I ended it with saying, 'look if you're one of the morons that are trying to push a point with the mask protest, I'm going to consider it assault if you walk into my place and I'm going to react accordingly,' and I really will," he said. "I don't understand what these people are thinking. If you're pro-business, you're pro mask. It's the end of that story."

Rogers' post has been 'liked' more than 1,600 times as of Wednesday afternoon.

"I would love for people to kind of examine what they're doing," he said. "If you're one of these anti-masking people why are you possibly trying to disrupt small businesses who every single one of us have had just the absolute worst year. This is my place here and I get to make the rules.

"I don't understand what these folks are thinking," he added.

On Wednesday, Boise Police said they sent an officer to several businesses to advise them on how to handle protesters in the future.

So far, three people have been cited for trespassing under the city's public health order.