"I'm afraid this is more from our anti-vax colleagues to stoke fear and misinformation instead of science." 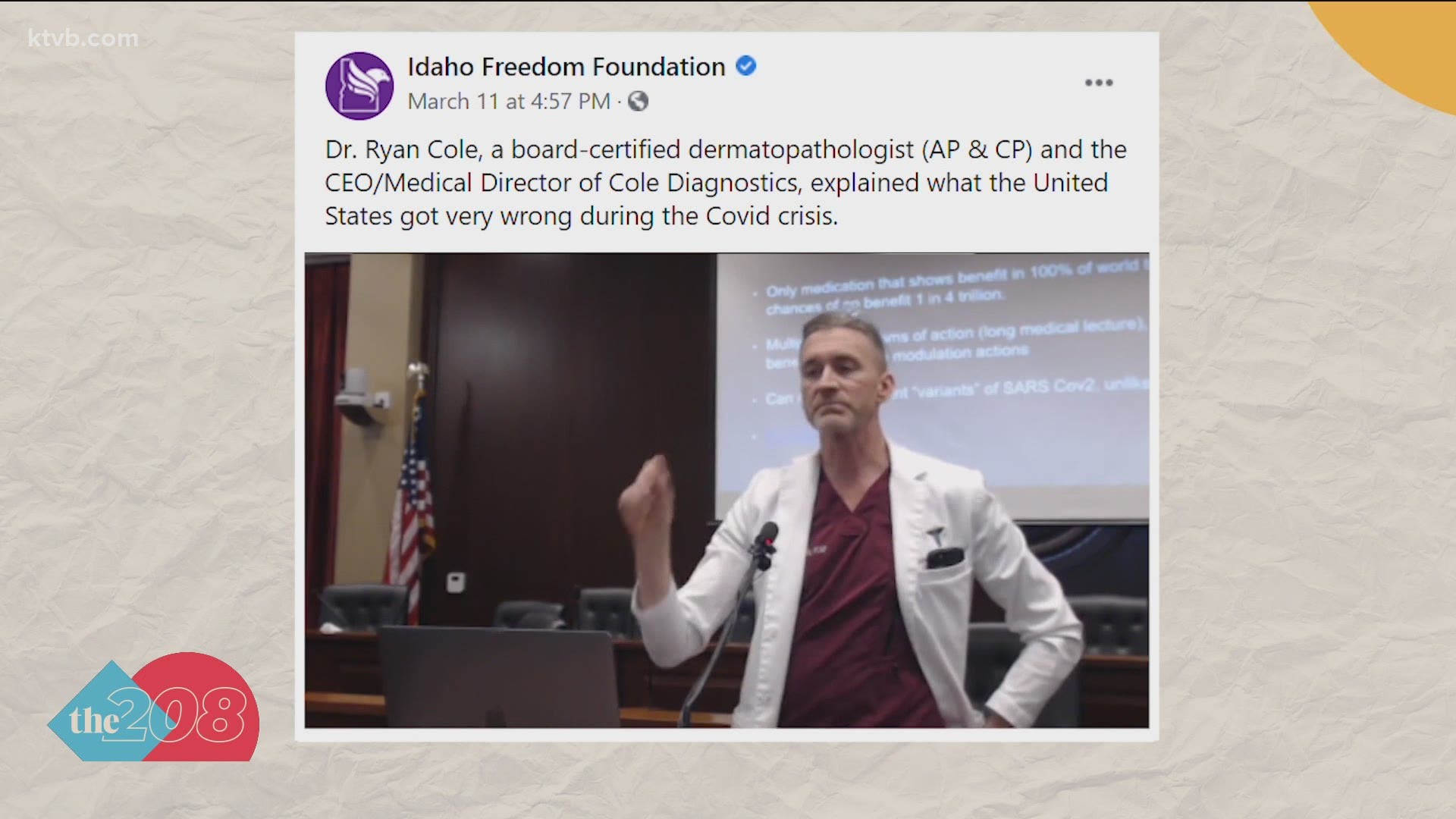 BOISE, Idaho — One of St. Luke's top doctors spoke with The 208 on Tuesday to discuss and fact-check anti-vax statements that one Garden City doctor told state lawmakers last week.

Cole, who owns and runs Cole Diagnostics, a testing lab in Garden City, made claims that the mRNA COVID-19 vaccines could cause cancer and medication for parasites in horses could be used to fight the virus instead of other proven treatments.

Starting with the average age of death in America, it was 78.8 in 2019, according to the Center for Disease Control and Prevention. In 2020, it dropped a full year to 77.8 due to the coronavirus pandemic.

Cole also suggested that other treatment options for COVID-19 should be avoided and questioned the vaccines that hundreds of thousands of Idahoans have already safely received.

He even went onto say that the COVID-19 pandemic in Idaho is statistically over.

In order to fact check the claims he made to state legislators, The 208 spoke with Dr. James Souza, the Chief Medical Officer at St. Luke's Health Systems.

Citing the rising number of new cases per day and the uptick in COVID-19 variants reported in the Gem State, Souza said the Idahoans may be done with the pandemic, but the pandemic isn't done with Idaho. He added that drawing conclusions with what to expect from COVID-19 based on what other viruses have done is just flawed logic.

When speaking with legislators, Cole said, "What are our highest risk factors? obesity, low vitamin d levels, advanced age. 90% of deaths in the state have been over 70 years of age, that's the at-risk population. We have stopped our society for something that is taking people that are already at that death risk age anyway."

Souza said that claim is simply false and cruel.

"But I personally have been the part of the care team, I'm an intensivist for 75-year-olds who died from this who were frankly fit as fiddles and their only 'crime' was that they're 75 and they came across covid," he said.

"When you actually look at the statistics of that group and you ask the question, 'Ok on average how many more healthy years of life does that group have?' It's 10-15 more years depending on race. I just think that statement about stopping our society for something that is taking people who are already at a death-risk age, beyond being wrong, I found it particularly cruel that that comment elicited laughs by some of our legislators, that I guess these people who were just going to die anyway, they just kind of went ahead and did it for us. It's chilling, and sort of like, who are we?" Souza added.

Cole also told lawmakers that ivermectin, a medication used in horses to treat parasites, killed the coronavirus in 99.9% of petri dish studies. Souza said while this statement is true, it would have to be given to humans in a dose 100 times the size used in studies, which would be unsafe for humans.

"When you actually go to the studies, the truth is, it's a mixed bag so we should talk about the entire bag and not just the positive sides of the bag," Souza said. "I understand the desire to reach for solutions that are easy, but I find it interesting that people might be more interested in putting an animal, anti-parasite, chemical medication into their body to prevent something that we already know we can prevent non invasively by wearing a mask and spacing out."

He also claimed that 50% of health care providers won't get the vaccine because they don't trust it.

Souza mustered an eye-roll before he explained that every part of Cole's claims was false.

"But let's be honest about it, I mean the vaccine trials started about a year ago so we are looking at data that's six and nine and 12 months now and we're not seeing these sorts of effects," he explained.

Souza added that about 72% of St. Luke's employees have voluntarily taken the COVID-19 vaccines.

"I'm afraid this is more from our anti-vax colleagues to stoke fear and misinformation instead of science."