Is there a 'book of secrets?': Boise State expert provides insight on presidential transition

Dr. Charlie Hunt, a political science professor at Boise State, answered our questions - some of them fantastical - about the presidential transition. 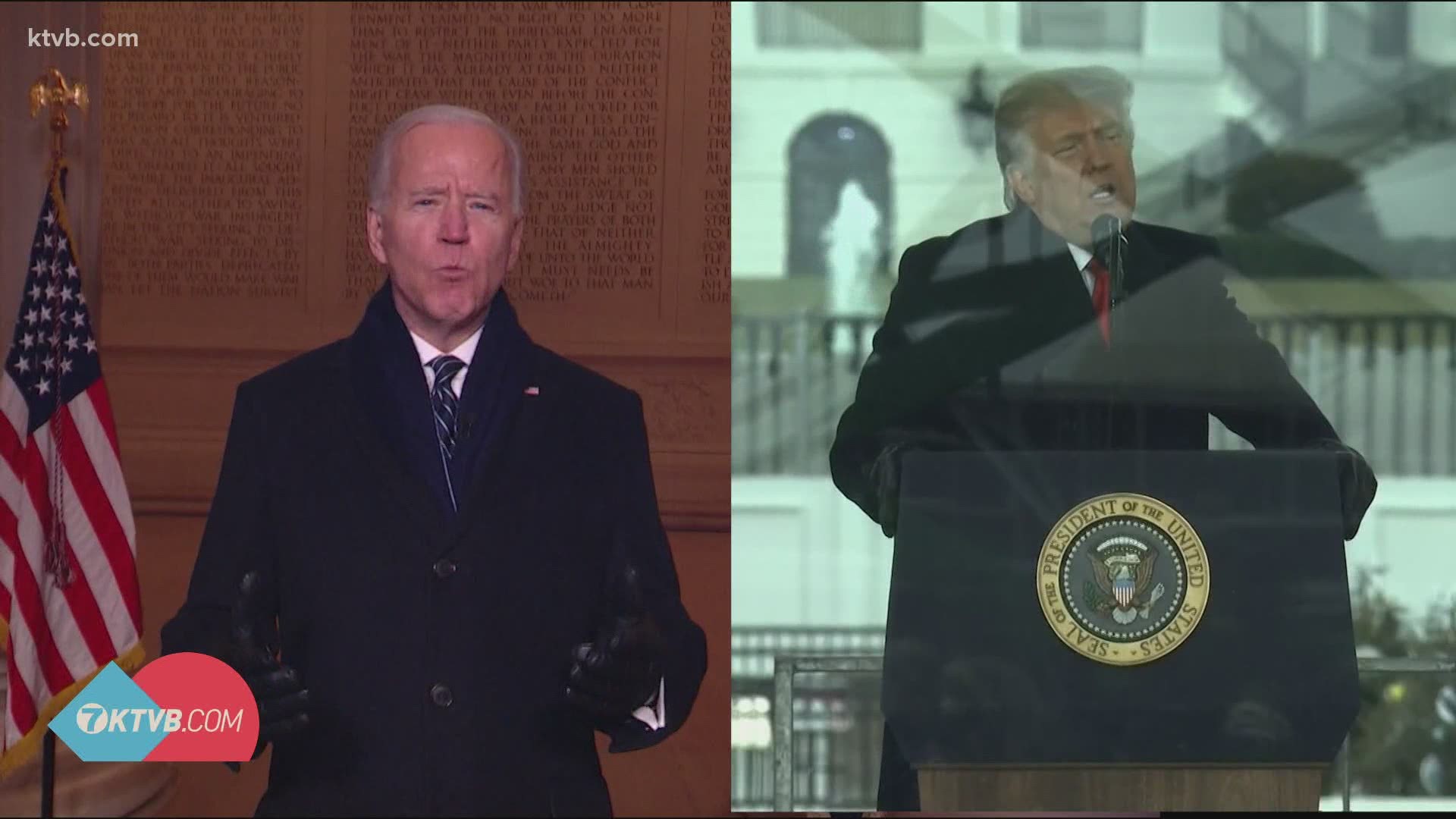 BOISE, Idaho — The presidential inauguration of Joe Biden on the steps of the U.S. Capitol was a drastically different scene from two weeks prior when rioters stormed the building.

Many saw the inauguration as a step forward for a country that is still greatly divided.

“[Doing] things in this kind of ritualistic way at the Capitol is, I think, a huge symbolic rebuke to that insurrection movement and I think you saw that reflected in President Biden’s inaugural address as well,” said Dr. Charlie Hunt, a political science professor at Boise State.

Hunt's research is focused on American politics with an emphasis on the presidency. As President Biden begins his term, of course, former President Donald Trump’s term comes to end.

According to Hunt, Trump’s approach to the office of the presidency was certainly unique but managed to gain traction with millions of Americans.

“I think a lot of Americans when they are looking for a president they are looking for someone who will represent them and a lot of times that means someone who 'talked the way I do,' who isn’t afraid to curse or say the inarticulate thing and that leaves them sort of sick of a lot of conventional politicians who always have a carefully crafted soundbite and things like that and I understand why a lot of Americans feel that way,” he said.

Hunt believes the ‘Trump way’ of politics is likely going to serve as a blueprint for some future political candidates.

“I think Trump is not the last Trump-like candidate we are ever going to see for president," he said. "I think there are going to be others who will try to replicate his style knowing that it did have some significant success at least among Republicans."

When reflecting on the Trump presidency, Hunt says one of the most notable accomplishments has to be the signature Republican tax reform bill which made large changes to the tax code. Other big policy changes the Trump administration made are not likely to last.

“In terms of policy, you could say he was very ineffective in that he took a ton of executive action through executive orders and other executive actions to change policy to change how the bureaucracy is run, things like that," Hunt explained. "But, if he hasn’t already, President Biden with the stroke of the pen is going to undo a lot of that. That’s the danger of policymaking through executive orders which is that these things don’t last, they don’t have the lasting effects of working with congress and developing legislation."

As the administrations change, there have been questions about the transition. While almost the entire White House staff will move on, Hunt explains there is continuity in key positions in Washington.

“It is a very interesting process," he said. "There is a lot of staff, particularly in the bureaucracy, that stay through that are what we would call career officials or career civil service professionals. These are the experts in intelligence and security, these are health experts like at the CDC. These folks stay through so there is always some kind of continuity."

A popular urban legend is that the outgoing president hands off a “book of secrets” to their successor. The mythological book, which has been featured in TV shows and Hollywood movies, supposedly includes America’s deepest and darkest top-secret info.

“I wouldn’t say I know a whole lot about it, I have heard of it," Hunt said. "My best guess would be to follow the signs and the evidence and my guess is there is not a whole lot of physical evidence of [the existence of] a book of secrets."

There is something though that Trump did leave behind for Biden though - a letter left in the Resolute Desk in the Oval Office.

“Traditionally this is a short letter, just some words of advice," Hunt said. "It’s a very nice tradition. One might have assumed that President Trump would not have left a letter for President Biden considering how long he held out in challenging the election, but the word is that he did leave him a letter and I do wonder if we will ever find out what it said."

The contents of the letter has not been reveled, but Biden called it "generous."

According to Hunt, Biden and his team must hit the ground running as the country faces a variety of challenges including the pandemic, the economy, and social justice movements, just to name just a few. His first major test will be handling the pandemic, and Hunt believes that test will set an important tone for his presidency.

“If he is seen as having dealt with that effectively, that gives him some political capital possibly to really go forward on some of these other major issues like immigration depending on what he wants to prioritize as he goes into the first year of his term,” he said.