Precious Metal Arts owner Mike Rogers told KTVB that he finds it hard to believe the sign and the smash-and-grab aren't related. 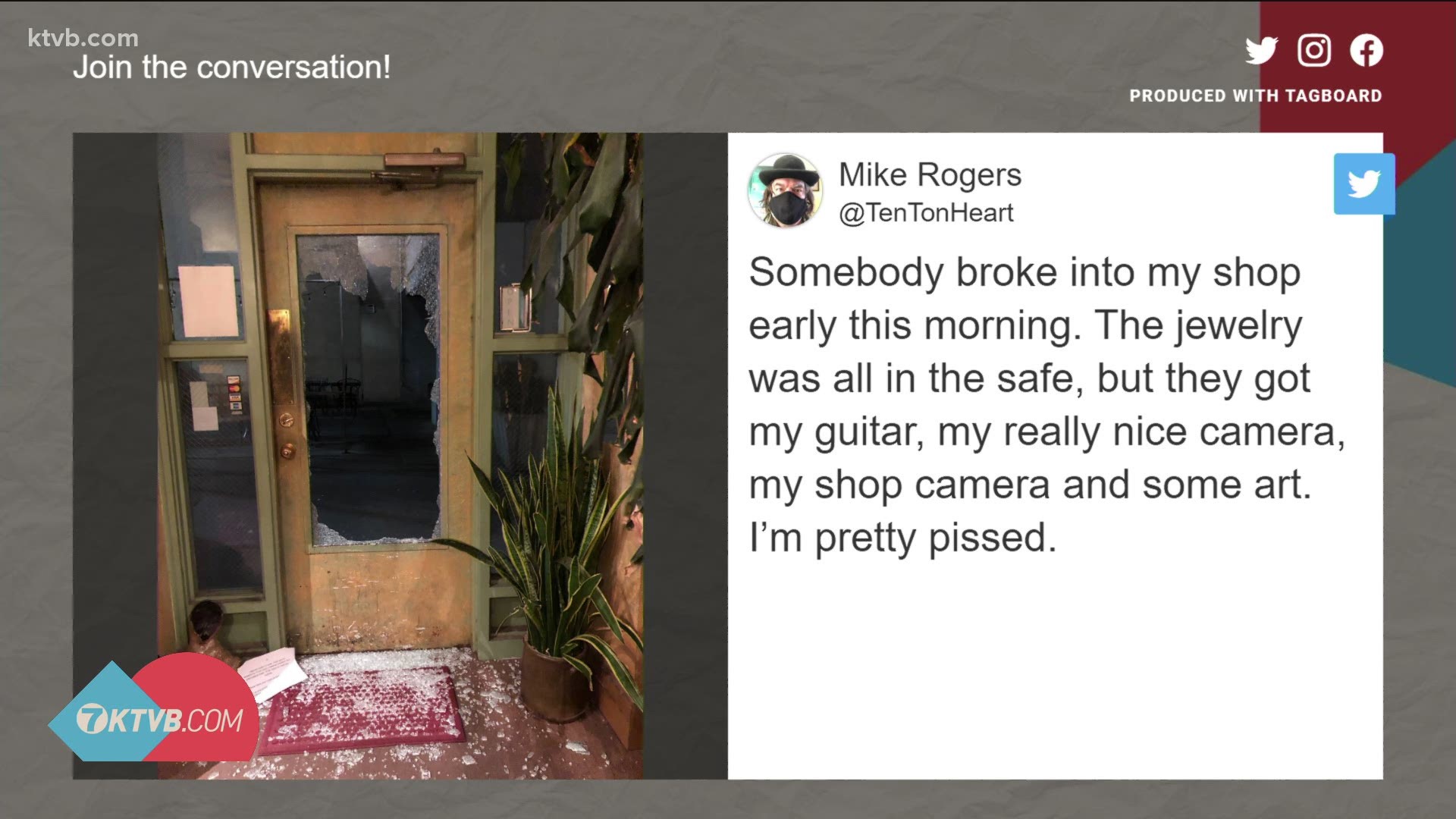 BOISE, Idaho — Just a week after the owner of a downtown Boise jewelry shop posted a strongly-worded sign about face masks on the door of his business, the shop has been burglarized.

Last week, we told you about Precious Metal Arts owner Mike Rogers, who decided to put a sign on his door after a group of anti-mask protesters went around to several Boise businesses on Small Business Saturday to protest Boise's mask ordinance.

Rogers' shop on 8th Street was spared that day and nobody dropped in to harass him. but seeing what the protesters were doing prompted him to post a sign that reads, in part, "I require masks to enter. There are no exceptions... If you are one of the morons protesting the mask ordinance, stay out. I will consider it to be an assault if you enter and I'll respond accordingly."

He also noted that if someone has a medical condition that precludes a mask, he would be "happy to meet you outside."

Since then, Rogers has received a lot of support, but also a lot of negative feedback.

He told KTVB he's gotten threats, both to his business and personally, for putting up the sign.

Then on Thursday morning, Rogers posted on Twitter that his shop had been broken into - the door smashed and the sign on the floor.

"The jewelry was all in the safe, but they got my guitar, my really nice camera, my shop camera and some art," he said in the post. "I’m pretty pissed."

Somebody broke into my shop early this morning. The jewelry was all in the safe, but they got my guitar, my really nice camera, my shop camera and some art. I’m pretty pissed. pic.twitter.com/zqbBvE59q2

The stolen guitar, he said, had sentimental value since it spent 20 years on stage with him.

In addition to the guitar and camera, the thieves got away with about $17,000 worth of other items, including a family clock that Rogers got when he was 8 years old when his grandfather died.

He told KTVB Thursday afternoon that he finds it hard to believe the sign and the smash-and-grab aren't related.

He called the incident senseless but said he'll be fine. The first person to call him after he announced the burglary on Twitter was Steve Fulton from the Audio Lab Recording Studio in Garden City, which suffered a similar break-in last month.

Rogers is now hoping for the same result.