Keepin' It Local: Runners keep coming back to Bandanna

Bandanna Running and Walking has been a staple in Boise for 25 years. 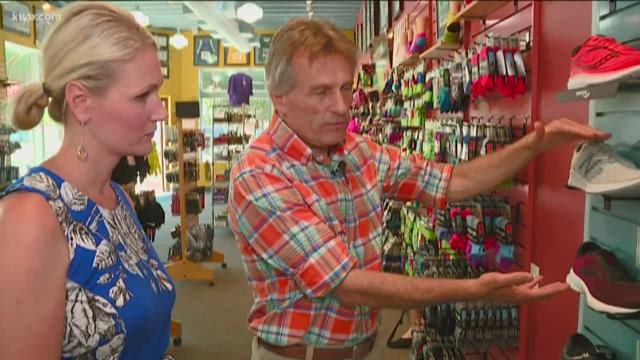 BOISE, Idaho — Just follow the running dinosaurs into a store that's all about the sport.

"We have been here since October of 1994," said Rich Harris.

Rich Harris opened up Bandanna Running and Walking after a stellar career on the track.

"I'll brag a bit, 1984 was my best year, that was the Olympics in L.A.," said Harris. "I'm well known for falling in the trials, but I went on and had a great European season. I ended up running the fastest mile in the United States that year, and I was number six in the world."

His running accessory of choice led to the name of the store.

With some support, Rich says he took the big leap of faith.

"You knew a lot about running though," said KTVB.

"I did, I knew how to run the mile fast, and that's about all I knew," Harris replied.

But 25 years later, Bandanna Running and Walking is going strong.

Rich says it's because they have a real niche and a great selection.

"We divide our shoes into categories. Here we have lightweight trainers, these are neutral shoes, these are stability shoes," said Harris. "Our job is to figure out is what type of shoe do we want to recommend for you.  If you're a trail runner, we have another category here that's all trail."

They also have all the clothing and accessories you need for a good run.

"And of course you have bandannas here," said KTVB.

"We do, it's the name of the store, that's what I'm known for, wearing a bandanna when I was running so each pair of shoes you get a free bandanna with the shoes," Harris replied.

And customers, keep coming back because Rich says they know the service provided is unmatched.

"It's just taking the time, listening to what's going on, and hopefully through the years of doing this I can steer you in one direction or another to get you in the right shoe," said Harris.

Rich credits his wife Shannon and staff for much of the store's success.
And they are all, of course, runners!

By the way, if you stand on your feet a lot, maybe you're a teacher or nurse, Bandanna Running and Walking has great shoes for you too.

The store is located on Main and 5th streets in Boise.