Is the Treasure Valley ready for the massive population growth expected by 2040?

The valley's population is projected to surpass 1,000,000 in the next 20 years. Some think it could happen much sooner. 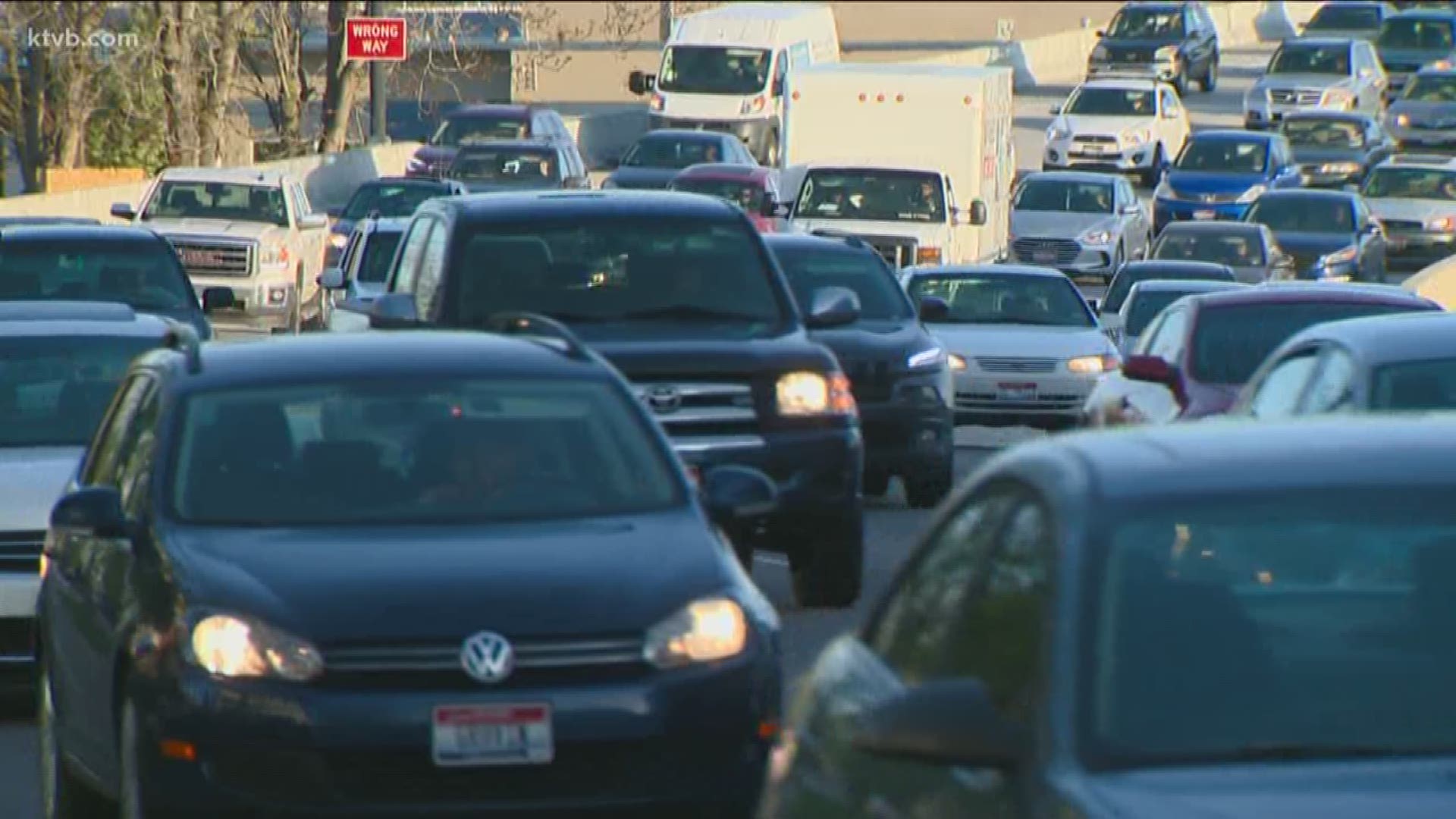 BOISE, Idaho — With tens of thousands of new residents moving into the Treasure Valley each year, a booming housing market along with skyrocketing home prices, and increasing heavy traffic on roads, Idaho's biggest metropolitan area is experiencing some extreme growing pains.

That's not expected to change in the decades ahead. In fact, the exponential growth - and the ability to adapt to it - has been a concern for community planners for decades.

Sparked by local concern over the rate of growth in the Boise area, KTVB produced a one-hour town hall discussion back in 1989, featuring community leaders and citizens bracing for what they all knew was coming.

One prominent question that was raised at the town hall: How long will the boom last? We're now finding out that not only could it last for the foreseeable future, but the boom has only become more dramatic in recent years.

WATCH BELOW: This timelapse from 1984 to 2016 shows the Treasure Valley's expansion. You can change the location of the map (click and drag) to see other parts of the region. Mobile users should tap here.

Ada Planning gave way to the Community Planning Association of Southwest Idaho, or COMPASS, in 1999. After that transition, the nonprofit turned its focus on growth to the two counties and unincorporated areas in the region. Suddenly all eyes were on the scope of the growth throughout the Treasure Valley and not solely on the capital city.

In 2006, COMPASS Director Matt Stoll sat down with KTVB to talk about the new Communities in Motion 2030 study, which provided a bleak outlook for the region and its ability to keep up with growth that had been underestimated years earlier.

Infrastructure and public transportation needed to be expanded to accommodate all the new developments, the report concluded. State, county and local governments were slow to answer the call for action.

Now, 13 years later, and a couple 100,000 more residents with hundreds of thousands still to come and the question remains: is it a lost cause?

INTERACTIVE PHOTO BELOW: Look at changes at Eagle Road and Fairview Avenue, now home to the Village at Meridian. Mobile users, tap here.

"Basically, if you are adding in over 300,000 people, then the existing transportation infrastructure is not going to be adequate to move those folks around," Stoll said in an interview this month. "We have 1,022,000 people moving into the Valley by the year 2040."

One million people here in the next 20 years, and some think it could happen sooner.

COMPASS's population density map from 2010 shows the valley’s population at 580,000. Recent data estimates the current valley-wide population at 710,000. The projection for 2040 is over 1 million with 30 to 40 people per acre living in the pockets in Meridian and Boise.

How does the Treasure Valley prepare for 2.7 million?

But COMPASS analysts didn’t stop there. The buildout forecast shows what the valley could look like in the decades following 2040. The number is a staggering 2.7 million people in the two-county area of the Treasure Valley - at some point in the future. How does a region prepare now for that?

WATCH BELOW: Look at the Treasure Valley's projected population density 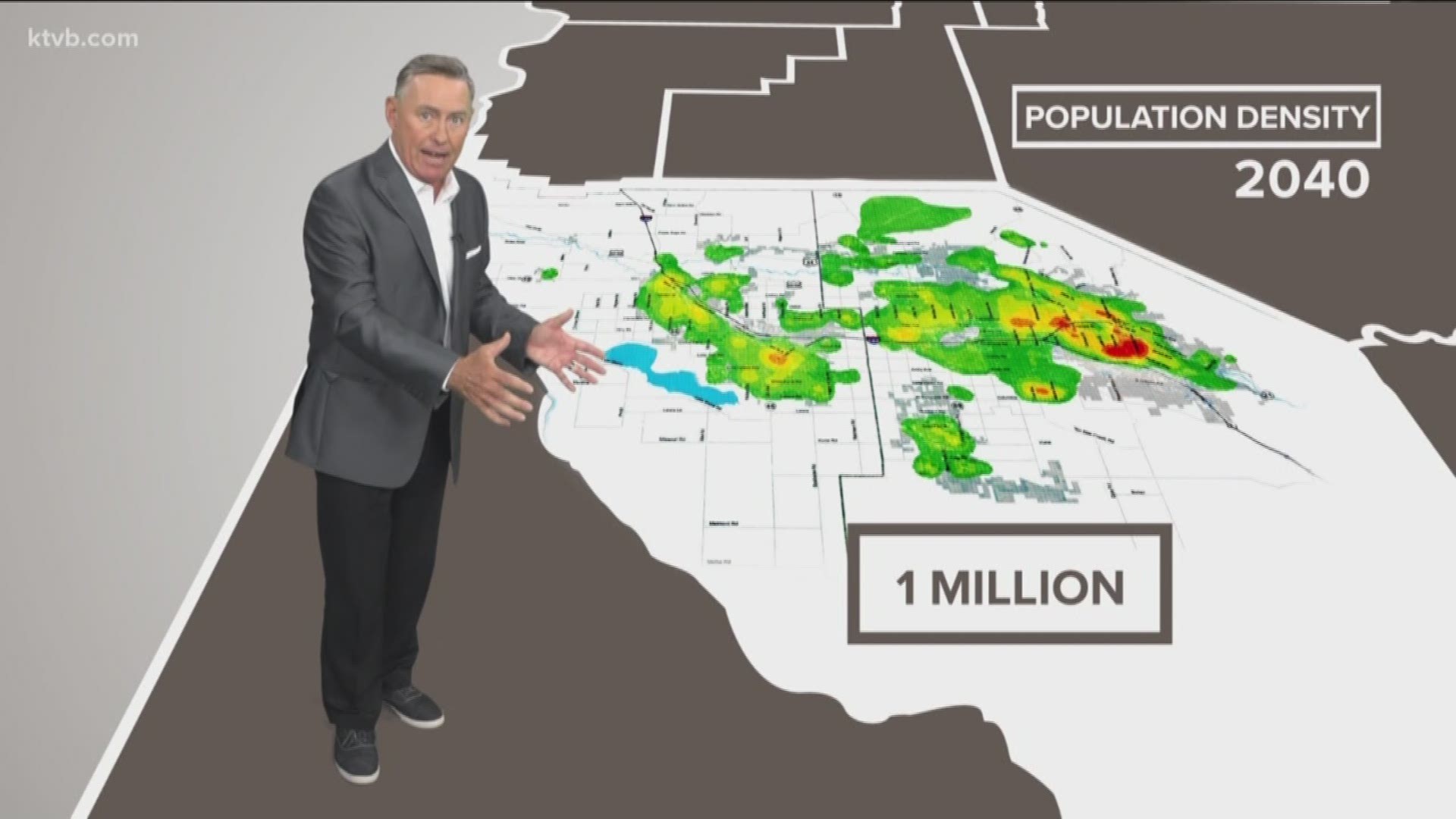 A transportation task force formed by former Idaho Gov. Butch Otter announced in 2010 that the income from gas taxes and fees the state collects to build and maintain its infrastructure was coming up $235 million shy of where the state needed to be to keep up with growth.

RELATED: Yes, many Californians are moving to Idaho. Here are the other states new residents are coming from

Every year that gap gets a little wider due to the lack of a “hedge" in the system for inflation. Not to mention, cars and trucks are becoming more fuel efficient and paying less at the pump.

And, as is the case with anything, the older things get, the more maintenance they need. For example, an infrastructure report card from the American Society of Civil Engineers released last year found that more than 1,500 Idaho bridges are in need of repairs - many of them are over 50 years old - and the cost to repair those bridges would top $2.2 billion.

"So, we're dealing with all that and now if you add lanes you add to shortfall in funding, so it’s a vicious circle," Ness said.

MORE: Then and now: See how the Treasure Valley has grown in the last 100 years

The Interstate 84 corridor is the lifeline of the valley. It serves as the main artery delivering and connecting people and goods.

COMPASS reports that, right now, the commute between Caldwell and Boise averages 39 minutes. They project it will be 62 minutes in 2035, and 70 minutes in 2040.

Those projected numbers were recently adjusted due to a federal grant.

The Infrastructure for the Rebuilding of America grant - which has typically focused on larger regions around the country also struggling to keep pace with growth - awarded the state $90 million to widen I-84 to three lanes in each direction on a four-mile stretch in Canyon County that has long been an issue.

Credit: KTVB file photo
A project to widen Interstate 84 between Nampa and Caldwell will ease congestion during the morning and evening commutes.

Expanding the freeway between Nampa and Caldwell will cut the commute time in 2040 from the projected 70 minutes down to 55 minutes. Transportation officials say it’s a step in the right direction.

And now, the rest appears to be up to the Idaho Legislature.

"I think it can get better," Ness said. "I think the legislature knows it’s a priority that it will have to deal with. I expect that Gov. Little will come out with some type of comprehensive transportation plan within the next year or so."

The bottom line is this: The secret is out. People are moving to the Gem State in droves and growth isn’t going to slow down. The decision to adapt to it, both Stoll and Ness said, falls on citizens.