Police are digging into the case, where the investigation now spans everything from the couple's end-of-days beliefs to suspicious deaths of their former spouses. 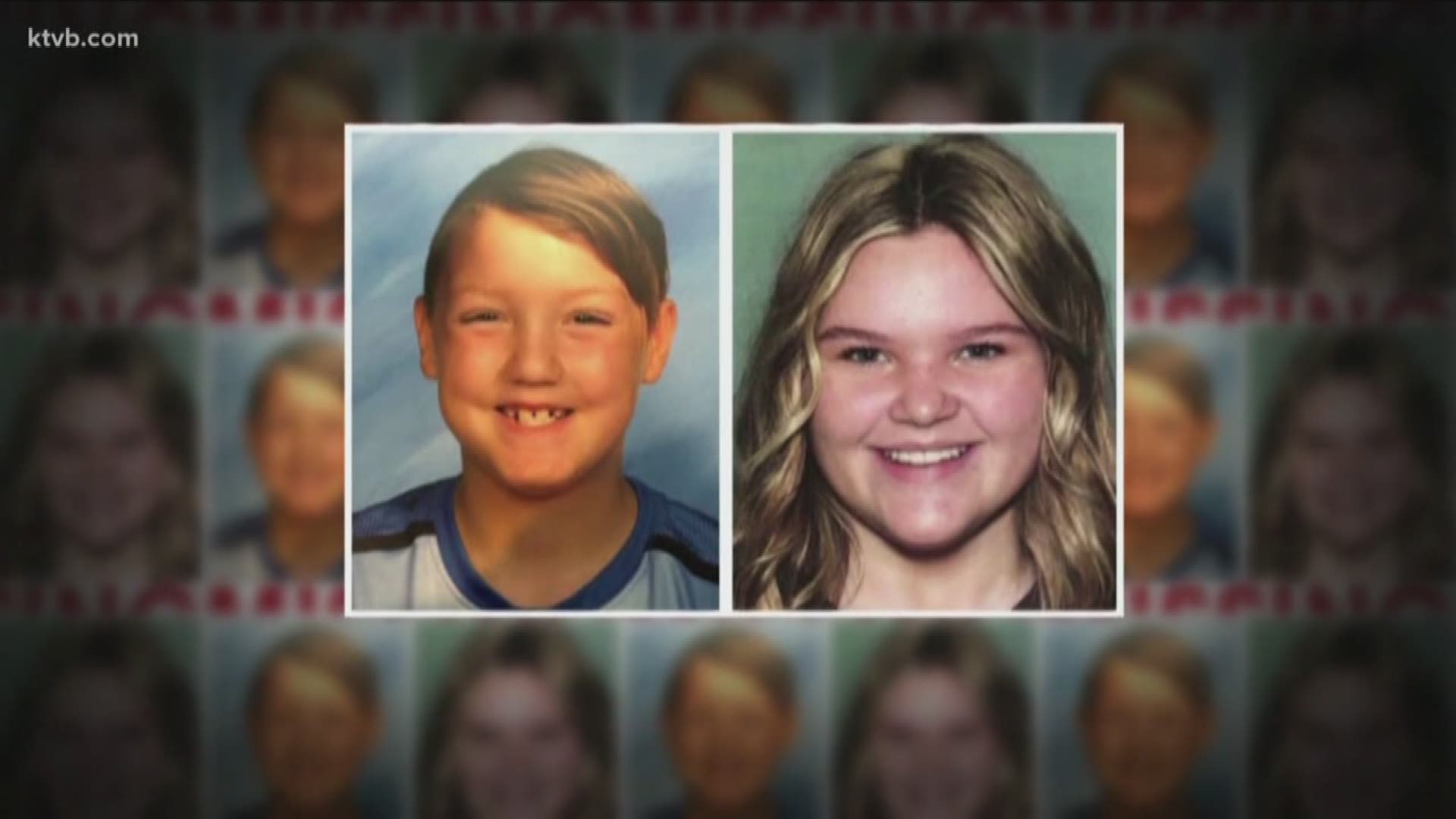 The grandfather of two missing Rexburg children says he is still holding out hope that he will see them again, even as police scrutiny and unanswered questions continue to swirl.

Lori Vallow, the mother of 7-year-old Joshua "J.J." Vallow and 17-year-old Tylee Ryan, has been served with a court order to prove that her kids are alive and well by Thursday.

Both children have been missing since September. Lori Vallow and her new husband, Chad Daybell, left town after the sheriff's office began asking questions about the children's whereabouts. Investigators tracked the couple down in Hawaii earlier this week, but say they have found no sign of the missing kids.

Larry Woodcock, J.J. and Tylee's grandfather, pleaded for the couple to reveal where the two children are.

"They're good kids, they don't deserve this," he said.

Credit: Rexburg PD
Tylee Ryan, 17, and Joshua Vallow, 7, have not been seen since September. They are both from Rexburg, Idaho.

No charges have been filed against Lori Vallow or Chad Daybell. The Madison County Prosecutor's Office told KTVB it will be up to a judge whether Lori will be arrested if she ignores the order to physically produce J.J. and Tylee to the Idaho Department of Health and Welfare by the deadline.

Local law enforcement is still working to dig into the case, where the investigation now spans everything from the couple's end-of-days spiritual beliefs to the suspicious deaths of their former spouses.

Fremont County Sheriff Len Humphries said that his office received a call Oct. 19 that a Rexburg woman had died in her sleep. The dead woman was Tammy Daybell, the then-wife of Chad Daybell.

"At that time, nobody suspected anything was wrong," he said.

Within weeks of his wife's death, Chad Daybell married again - this time to Lori Vallow. But just a month after the new couple tied the knot, relatives of J.J. and Tylee contacted law enforcement, concerned that no one had seen or heard from the kids since September.

Officers went to the couple's house in Rexburg to check on the children. The story they were given there did not add up, the sheriff says.

"They went to the home, asked to see the kids - they weren't there," Humphries said. "We were told that J.J. was in Arizona with family. That was checked and followed up on, and that was false. And they have not been seen since."

Shortly after the visit from law enforcement, Lori Vallow and her husband left town.

In January, the grandparents of the children put out a desperate plea to the community, offering a $20,000 reward for any information that led to the safe return of J.J. and Tylee.

"Please give them back to us," Woodcock said. "They are just the most unbelievable children you could meet."

Meanwhile, police in Chandler, Arizona reached out to the Fremont County Sheriff's Office, advising them to take a closer look at the death of Tammy Daybell, which had been ruled from "natural causes."

Arizona authorities told Humphries that Lori Vallow's former husband had also turned up dead just months before her remarriage. Charles Vallow had been shot to death in July 2019 by Lori's brother, Alex Cox.

In the 911 call Cox made after the shooting, he told police he had shot Charles Vallow to death in self-defense after the other man attacked him with a baseball bat.

"Is he hurt, or is he alive?" the dispatcher asks Cox.

"Is he breathing?" the dispatcher asks.

Cox later told officials that Charles Vallow had attacked him and seemed "enraged."

Not long after the deadly shooting, Alex Cox also turned up dead. His cause of death remains unknown.

"When [Lori Vallow's] brother shot and killed her ex-husband, there were several people present," Sheriff Humphries told KTVB. "To my knowledge, those people are all missing or all dead, the two children being two of those who are missing."

Armed with this new information, Fremont County officials sought - and were granted - permission from the courts to exhume Tammy Daybell's body and do a second autopsy. The results of that investigation have not yet been made public.

The deaths of both Alex Cox and Charles Vallow also remain under investigation. But court records show that Charles Vallow had sought a divorce earlier that year, writing in filings that Lori Vallow was mentally unstable and had threatened his life.

Charles Vallow wrote in the February 2019 filing that Lori had referred to herself as a god who was assigned to carry out the work of Jesus Christ before the second coming. He added that his wife had told him that if Charles got in her way, she would kill him and an "angel" would help dispose of the body.

Five months later, he was dead.

The Fremont County Sheriff's Office says after his death, Lori and her kids moved from Arizona to Rexburg. It was around this time that J.J. and Tylee's grandparents would lose all contact with their grandchildren.

"After Charles was murdered July 11, we've had three contacts with J.J. -  three very short FaceTimes, that last one being the shortest," Woodcock said. "The last call was the most awkward call. It was a call like somebody was watching him, and directing him."

"There was somebody else there," the grandfather added.

Credit: KMVT
The grandparents of J.J. Vallow and Tylee Ryan plead for their safe return during a January press conference.

The Fremont County Sheriff's Office says Chad Daybell shared his new wife's fringe beliefs about a looming doomsday, and wrote dozens of books on the subject.

"I think there was an organization here that Chad Daybell was promoting or heading," Humphries said. "I didn't know they existed here, but it has become apparent that he did have a significant following."

Investigators learned that Tylee was never enrolled in Rexburg schools after moving with her mother to Idaho. J.J. was briefly in the school system before being pulled out by Lori Vallow, who told school staff that she was planning to homeschool him.

When asked whether he believes Tylee and J.J. are still alive, Sheriff Humphries paused for a moment.

Woodcock is holding onto hope as well.

"We're not promised tomorrow, and all I want before I go is just to see those children and especially my boy J.J., my little man," he said.

But even after they were discovered living on the island of Kauai, Chad Daybell and Lori Vallow have offered no explanation of what happened to the kids. Investigators say there is no evidence that J.J. or Tylee were ever in Hawaii.

As the clock ticks towards the deadline to produce the children, their whereabouts remain shrouded in mystery.

"They're not talking to us," Humphries said. "I don't see any good reason that they can't just let us know that the kids are O.K."