KTVB Exclusive: The last people to see DeOrr Kunz Jr. alive talk about what happened to the missing toddler

DeOrr's mother and father were two of the last people to see the then two-year-old before he disappeared. After four years, he's still gone without a trace. 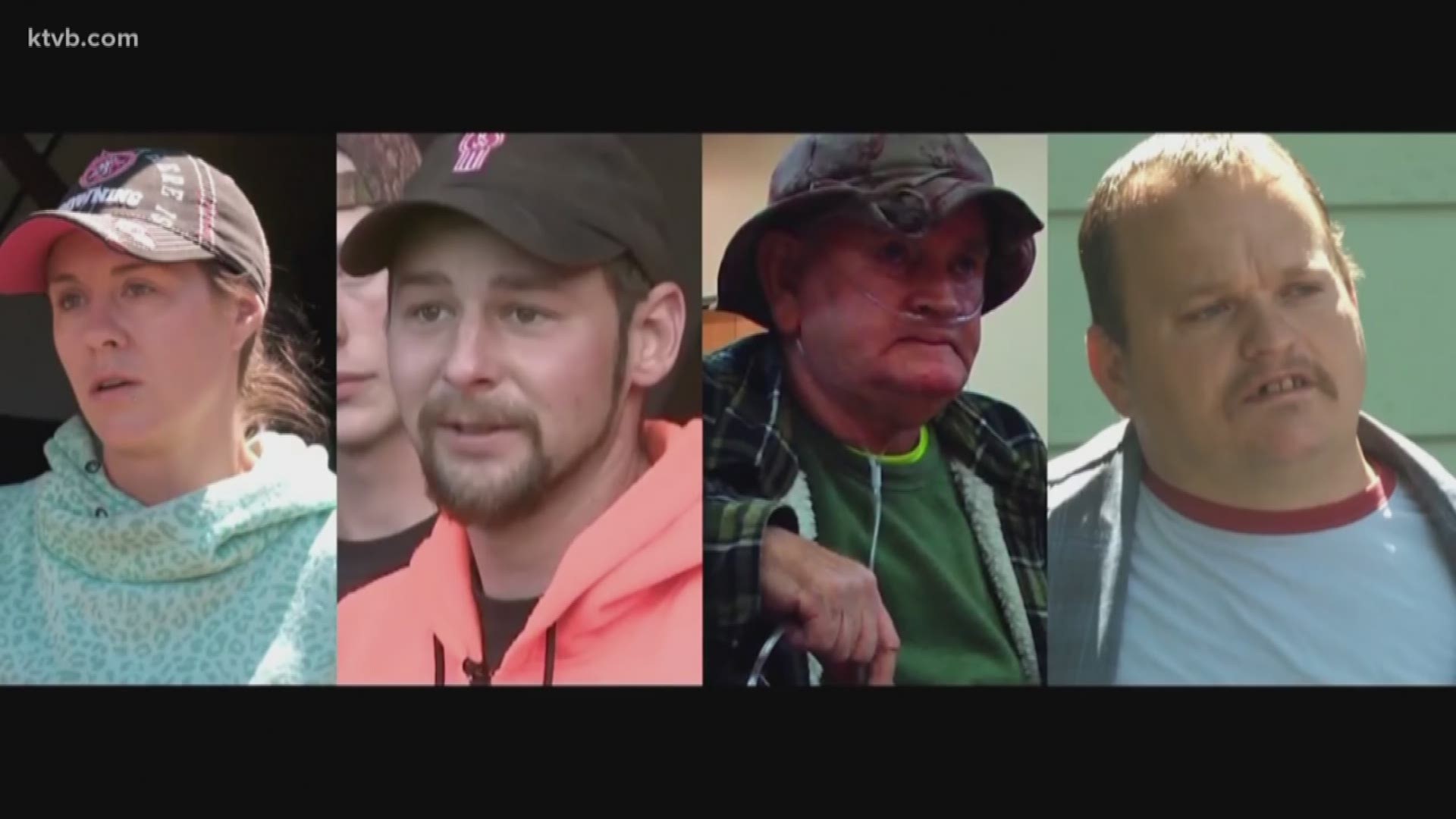 LEADORE, Idaho — Four years ago this past week, 2-year-old DeOrr Kunz Junior disappeared. His parents say DeOrr disappeared while they were camping near Leadore in Lemhi County, Idaho. Four people were on that camping trip.

In a NewsChannel 7 Exclusive, KTVB's Kim Fields talked with the three people who say they were the last to see the missing boy alive.

The three rarely talk to the media, but his mom and dad say after four years, they felt the public needed to hear something.

DeOrr's father, Vernal DeOrr Kunz, says his little boy always had a toy car in one hand and one of his tools in the other.

"He'd be working on stuff with me, working on his own stuff, riding a dirt bike, riding 4-wheelers. He'd be building stuff with me. That's exactly what he'd be doing," Kunz said.

Interactive Timeline: 4 years since DeOrr Kunz Jr. disappearance: What you should know

KTVB's Kim Fields: "What do you think about?"

Kunz: "Just how he'd be now. I keep positive. It is positive. But the best thing I ever did has been a father and I've missed out on that."

There are three theories as to what happened to DeOrr - he was kidnapped from the campground, taken off by an animal, or someone on that camping trip did something to him.

Fields: "Do you have anything to hide?"

Fields: What is it like to be accused of murdering your son?

Accusations and rumors about the parents' involvement began to emerge not long after baby DeOrr disappeared. After one year into the investigation, now retired Lemhi County Sheriff Lynn Bowerman named the parents suspects.

"We've given them too many opportunities to tell us what happened, if it was an accident," Lemhi County Sheriff Bowerman said in 2016. "There's been no interest in going that direction. So that tells me there's only one other possibility, that it has to be a homicide."

Bowerman told KTVB in 2016 it was highly unlikely baby DeOrr was kidnapped. There's one road in and one road out to the remote Timber Creek Campground. And if an animal had taken him, there would be evidence left behind, like DeOrr's boots that were too big for him. Bowerman believed they would have fallen off. But after days and weeks of searching, not a trace of DeOrr found at the campground.

Fields to Kunz: "Sheriff Bowerman he thought and said, 'I don't even know if DeOrr was up at that campground.'"

Kunz: "You know, eventually I'll be able to prove a lot of this, a lot of these theories wrong."

Fields: "What do you mean by that?"

Kunz: "That's just a theory that is wrong. My son was there. He was at the store, people seen him at the store."

Mitchell: "That's the hardest part about all of this is just not knowing if he's alive or if he's gone. And I need to grieve and mourn the loss of my son, or, because you know all of this, I feel like I can't grieve because I don't know where, you know, I don't know the situation. Because if I start grieving and mourning the loss of him, then it feels like I'm giving up."

Mitchell: "Um, I believe a lot of it is like blocking things out, you know. You're so emotional, you're so, you're trying to remember everything as they're asking you all these questions a thousand times, and being drained, and not sleeping, and you know everything all at once, you block things out or you forget."

There were two more people at the campground that day - Jessica's grandfather, Bob Walton, and his friend Isaac Reinwand.

Fields to Reinwand: "You're the one that can say whether or not DeOrr, baby Deorr was at that campground."

Reinwand: "As far as I know to my knowledge, he was there."

Fields: "He was there for the whole time?"

Reinwand: "The whole time we were up there and was camping with us, yes."

Fields: "What do you think happened to baby Deorr?"

Reinwand: "I have no idea. "Maybe it was an accident or something. I don't know."

Fields: "Do you think Jessica had anything to do with his disappearance?"

Reinwand: "Ew, I'm not going to comment on that either."

Reinwand: "I just feel like I just want to stay neutral in this situation, you know, I don't want to point fingers. "I don't think it's nice or it's right."

Fields: "Do you think Vernal DeOrr had anything to do with baby DeOrr's disappearance?"

Reinwand: "I have no idea."

"I was very clear, look, you're not going to like what I have to say," Philip Klein said in 2017. "And it was like, oh my God, these two people are suspects."

Fields to Mitchell: "Are you lying?"

Mitchell: "Absolutely not. I just, yeah, I have nothing good to say about Klein in all reality because he was there for the money. He didn't care about my son. The minute he got that money he was, 'Oh, it's the parents.'"

Kunz: "In my opinion, I wouldn't hire him (Klein) to find a lost dog in an empty parking lot."

Kunz says Klein accused them without any evidence of proof. He says he and his attorney have asked, but they say Klein has never provided them with one factual piece of evidence to back his claims.

Klein even said Jessica told him she knows where the body is.

Fields to Mitchell: "Did you know where the body was?"

Mitchell: "Absolutely not. I'm pretty sure that I would have been arrested a long time ago if that's what I said."

Kunz: "Your name's destroyed, your life's destroyed. And unfortunately, the minute he come out and said that he believes that my son was deceased, people stopped looking for him they just automatically condemned him to being deceased and condemned me and his mother as branded killers and it's something we're not. And it was wrong, it really was."

Mitchell: "I've lost jobs, I've had people threaten me in my workplace, I've had people message me on Facebook calling me a baby killer saying that they hope I rot in hell. Just these horrific things that I pray that no other parent has to go through this."

Fields to Mitchell: "When we talk about the public judgment and scrutiny can you understand why some people would point the finger?"

Fields to Kunz: "It's one thing for a private investigator in Texas, who you say is media hungry, to name you as a suspect to, as you say, throw your name through the mud, but it's another to have a sitting sheriff call our newsroom and say, 'I'm naming them suspects, I think this is a case of homicide?'"

Kunz: "Well, it doesn't mean it's how it was, just in his opinion we were suspects."

Fields: "Who did it? What happened?"

KTVB: "If I knew, I wish I could tell you if I knew, but hopefully soon I'll be able to know," Kunz said.

Fields to Reinwand: "I have to ask, did you do something to DeOrr?"

Reinwand: "No. I know this needs to be solved and the parents need closure and I know everybody wants to know what happened. And I wish I could tell everybody exactly what went down completely, but I don't remember everything."

Current Lemhi County Sheriff Steve Penner does not consider any of the four people at the campsite a suspect. Instead, he calls them "uncleared persons of interest."

He told KTVB, "Other people have called them suspects, but I'm not committed to that theory. You can't just pursue one theory."

Penner still won't say what, if anything, they found two weeks ago during a renewed search that closed down the campground. In the meantime, the parents continue to wait.

MORE: 'He was just there and then he wasn't:' Full interview with Isaac Reinwand about DeOrr Kunz Jr. disappearance

Fields to Mitchell: "Do you think he's still alive?"

Fields to Kunz: "If DeOrr is still alive what would you want to say to him?"

DeOrr's great-grandfather, Bob Walton, was also at the campsite. He died last month from complications of cancer. His daughter, Mitchell's mom, says she told detectives that her father wasn't doing well.

Trina Bates Clegg says a detective talked with him one last time, the day before he died.

Meanwhile, Mitchell and Kunz say they haven't been formally questioned by law enforcement in quite some time.

Sheriff Penner says he talks to them every few months or so, or when something comes up. He says they are cooperative.

KTVB has confirmed the FBI has been, and is currently, involved in the case. It is very much an open investigation.

See all of our coverage of the disappearance of DeOrr Kunz Jr. in our YouTube playlist: