The Corridor: Drugs impact schools, lives in the Treasure Valley

John Liles was 9 years old the first time he got high. 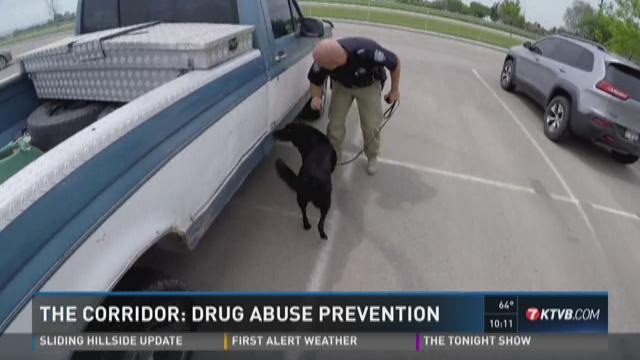 He was given the marijuana by a group of teenagers who thought it would be funny to get a little kid high. Liles, 28, said that at the time, he didn't enjoy it.

"I didn't really think I'd ever do it again," he said.

Liles is one of scores of Idahoans that have seen years of their lives swallowed up by addiction to drugs, a majority of which are pouring across the U.S.-Mexico border and into the Treasure Valley courtesy of cartel-linked traffickers.

As a recovering heroin addict with three years of sobriety under his belt, he is one of the lucky ones.

A total of 212 people fatally overdosed in Idaho in 2014, mostly on opiates like heroin and prescription painkillers, according to the Center for Disease Control.

Thousands more have ended up behind bars, and that number is rising, according to Idaho State Police. According to ISP records, methamphetamine cases handled by the Domestic Highway Enforcement team more than tripled from 2014 to 2015, while heroin cases increased 775 percent.

By middle school, Liles said, he was hanging out with the wrong crowd and discovered drugs were easy to procure.

"It went from marijuana to alcohol, then from alcohol to meth, and then from meth to jail," he said. "Then when I got out, it went to heroin."

At the height of his addiction, Liles said previously, he used up to two grams of heroin a day, and often couldn't bear to climb out of bed without first getting high.

"When you're in that life, it's so miserable. It really is," he said.

THE CORRIDOR: Mexican border acts as gateway for Idaho-bound drugs

Predictably, his habit led to trouble. Arrests for selling pot, possession of prescription pills, and grand theft - a case involving a stolen credit card that Liles was using to get money for drugs - sent him to prison twice.

Liles credits a theraputic community program he enrolled in while in prison with helping him get clean.

"It sucks to say it, but being locked away and doing as much time as I did, I think really was a huge benefit to me," he said. "It helped me get that time under my belt of being clean and realizing how I feel when I am normal."

He relapsed into drug use once after his most recent release from prison, but said he realized immediately that he wanted back on on track. Liles called the Allumbaugh House, a residential rehab and mental health service located in Boise, and asked for help. They got him in the next day.

"I detoxed, I got out, and I never got high again," Liles said.

Law enforcement leaders say that treating addiction and reducing the demand for drugs is crucial in halting trafficking and drug-related crime.

Elisha Figueroa, director of the Office of Drug Policy, said that work starts at the local level long before someone rolls a joint or picks up a meth pipe for the first time.

"We know that people often initiate drug use because of abuse, poverty, trauma, things like that that they experience in their lives, so if we can help to reduce those issues on the front end, we see less [drug] use," she said.

The Office of Drug Policy focuses on prevention, examining local drug use trends and enlisting the help of community members in determining what to tackle next. Those familiar with the hurdles unique to their own area and culture often have the best ideas about how to combat them, Figueroa said.

Still, it can be an uphill battle.

"Sometimes we say that we're playing whack-a-mole because it seems like just when we get one thing under control, something else pops up," she said.

Schools and families play an outsized role, Figueroa said. She urged parents to have "the talk" about drugs far earlier than the teenage years. Parents, not peers, have the greatest influence on whether a child chooses to use drugs, the Office of Drug Policy found.

"I think parents sometimes think, 'I don't want to talk to them about it, because I don't want to introduce anything to them,'" she said. "Trust me, you're not introducing anything to your kids. They've already heard it in school."

THE CORRIDOR: All roads lead to Idaho

Liles said when he was a highschooler, the drugs you could get from other students were typically limited to marijuana and pills like Norcos or Oxycontin. Other drugs, like methamphetamine, came from his friends' parents.

Today, kids have access to "whatever kind of drug you wanted" at school, he said.

The Boise School District had a total of 61 incidents at schools involving drug charges during the 2014-2015 school year, according to police. A police spokeswoman said the true count is likely higher, because investigations can start at the school, but end off-campus.

In 2015, school resource officers in the Boise School District issued 10 warnings or citations for prescription drugs, 11 for marijuana and 26 for other drugs like meth and heroin.

Numbers are low in the Middleton School District, something administrators credit in part to employing a full-time school resource officer. Deputy Kelley Anderson has been stationed at Middleton High School for a decade.

"When I first came, I was the first deputy who was here all the time," he said. "We've had SRO's in the schools for many years, but I was the first one to go full-time, and it has definitely made an appreciable difference."

Last year, the high school and middle school recorded only one drug-related incident - a possession of paraphernalia citation - and regular searches of the school grounds with a drug-sniffing dog did not turn up any narcotics in lockers or student vehicles this year.

"Regionally speaking, we see problems with marijuana, methamphetamine [and] heroin, so we want to make sure we're doing our part to make sure that that doesn't become a problem here in Middleton School District," Anderson said.

Middleton High Principal Mike Williams agreed, saying he believes it is Anderson's relationship with the students, not just his presence, that makes the biggest difference.

"We only have three administrators, but we have 1,200 students and so when they're watching out for what's going on, they feel comfortable to come report things to us," Williams said.

Figueroa says that's ideal. In addition to community-building, the Office of Drug Policy also focuses including curriculums in schools that take on drug abuse, and using with partnerships with health and police officials to identify brewing issues and head them off.

There is progress: In 2011, Idaho was ranked fourth in the country for prescription painkiller abuse, Figueroa said. By 2016, the Gem State's ranking had fallen to about 35.

"You can have success, but it really does take some effort," she said.

KTVB's investigative series 'The Corridor' examines how the drug trade reaches from Mexican cartels to the Treasure Valley, and the local impact of that trafficking. Tune in Wednesday night at 10 p.m. for the final chapter in the series.