7 Investigates: Why prices for medical procedures are so different

7 Investigates why the same procedure in the Treasure Valley can cost hundreds versus thousands and how you can protect against an overwhelming bill. 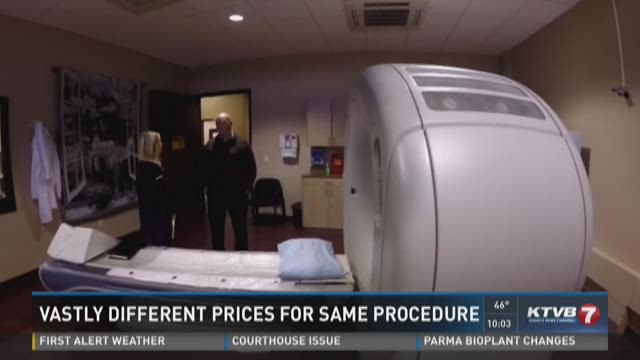 It's an issue that many of us have faced - trying to understand the complex system behind what we pay for medical treatment.

While your insurance coverage plays a role, so does the type of facility where you get the care.

7 Investigates why the same procedure in the Treasure Valley can cost hundreds versus thousands and how you can protect against an overwhelming bill.

Since Eric Crawford owns his own business, he buys health insurance for his family on the state exchange. In May, his wife got concerning results from a mammogram, and doctors ordered more tests, including a CT scan.

"When we went to figure out where it should be done, looked at our health insurance card and it said St. Luke's so we figured perfect, we will go to St. Luke's," said Crawford.

Crawford says the results were good - the scan was clear and his wife was fine. But the quick procedure resulted in months of frustration after Crawford got the bill.

"I have health insurance with the reasonable expectation that I will get fair and competitive rates and services, yet in this situation this was the direct opposite by having insurance, we ended up paying more," said Crawford.

Crawford says the cost for the CT scan at St Luke's was about $3,700, and after insurance, he owed about $2,700. But after calling around to local imaging centers outside his network, he was surprised to find much lower rates for the same procedure.

We went to two different imaging facilities, who said a CT scan can cost between $500 and $1,000 without insurance.

"Across the board, it's a better price at our place than at the hospital," said Dr. Anthony Giauque.

Dr. Anthony Giauque at Intermountain Medical Imaging says although the price is much different, the scan is the same as a hospital's.

Dr. Giauque says many times patients simply don't know there are other options outside of a hospital. In fact, he says only three percent of their patients check the price of a procedure beforehand.

Charles Eldredge at Imaging Center of Idaho agrees that patients should be more proactive about their care.

"When people find out they need an MRI scan or CT scan, it can be a scary time, it can be concerning for them, so typically they will just go where they're led and they don't realize they have that choice," said Eldredge.

Crawford says that's exactly what happened to his family. He says he was led to a more expensive procedure and wonders why. "But when it's triple and that's what I have to pay out of pocket, it just doesn't add up to me, I'm trying to figure out how this is in the customer's best interest."

Crawford's insurance company, Select Health, couldn't talk about this specific case, but says they encourage patients to discuss treatment options with their providers. They also said they work with facilities to determine appropriate costs when contracting rates.

They sent KTVB a statement speaking in general terms about the issue saying, "SelectHealth is committed to cost transparency. To this end, in early 2017, we will provide a cost transparency tool that will help members anticipate costs and make informed decisions about which providers and facilities they use. This tool will provide personalized information about deductible and out-of-pocket costs, plan design, and network."

"We encourage our members to discuss treatment options with their providers. Once treatment options have been determined, a member can also call SelectHealth, and a representative will review estimated costs with them. We work with facilities to determine the appropriate costs for our members. SelectHealth has contracted rates and negotiated prices with those facilities."

We also went to Bob Mueller, St Luke's vice president of billing, for an explanation.

"We will never be the lower cost provider in all services, we look for competitive pricing and there will always be facilities that only do one thing and they may be able to offer that one thing cheaper, but I don't believe that's the way you want to receive health care," said Mueller.

Mueller says the higher price tag includes everything that a hospital offers that a stand alone imaging center cannot. That includes 24/7 care, an emergency department, and immediate treatment options beyond just a diagnosis.

Mueller says as for their charges, it's a complex structure that mostly revolves around the Medicare methodology.

"There is no regulation for what we can charge but we try to set ours competitively, particularly against other general hospitals," said Mueller.

Mueller also says it's hard to compare exact procedures and prices, and adds their equipment might be different from other facilities.

He says before a procedure, patients can always call ahead of time for a price estimate.

"We are very straightforward and we are here to help, patients just have to reach out when they need that," said Mueller.

Mueller says keeping patients' costs in check is a priority. He says St Luke's prices are 85 percent of the national average.

"I don't think there is a hospital CEO anywhere in Idaho that doesn't have this issue of cost containment on their minds, they are always looking at ways to bend that cost curve and make sure we can drive down the cost of care in the state as much as we possibly can," said Brian Whitlock with the Idaho Hospital Association.

Whitlock says patients do need to be more proactive about their choices.

"I think people want to have peace of mind that when they go into a medical procedure, they are not only paying as little as they possibly can, but they are getting the very best procedure they can get, so cost and quality are both issues that need to be taken into consideration," said Whitlock.

We did check in with Saint Alphonsus also. We were unable to get an exact estimate on the same CT scan, but were told they have a price estimation tool on their website that patients can check.

St. Luke's says patients can call for a price estimate before a procedure.

SelectHealth says starting early next year they will also have a cost transparency tool available.