Housewarming "gifts" are showing up on people's doorsteps and in their mailboxes, but some are too good to be true. 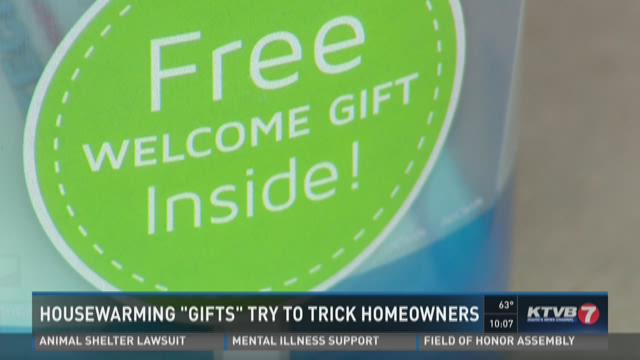 BOISE -- Blink your eyes and a new subdivision is popping up somewhere in the Treasure Valley, meaning new homeowners are everywhere and the opportunity to target them is rife.

Buying a new home is an exciting time, but it can also be a stressful time. After moving in, new homeowners are usually bombarded with mail usually consisting of deals and discounts from local businesses. Housewarming "gifts" are showing up on people's doorsteps and in their mailboxes, but some are too good to be true.

KTVB's 7 Investigates found out there are often strings attached to "free" gifts, and there are plenty of scams looking to steal your money.

"It is very easy to fall in traps," Meridian resident Zoltan Pap said.

Especially when the traps are so appealing and come neatly wrapped in a little box with the inviting words 'Free Welcome Gift'.

"The cards are extremely tempting," he added. "This is just 500 alone."

Pap and his family moved into the Paramount subdivision in Meridian a few months ago. At the end of April, he caught something fishy on his security camera:

"Leaves the package first and then sticks note close to door frame, blends in a little bit," Pap explained as he showed KTVB the security footage. "Takes a step back, takes photo of it, and then makes a note."

The individual did not attempt to knock on the door and let them know they were dropping anything off.

Pap says they weren't expecting any packages, but a note on their door from a company called Metro Delivery said 'Sorry We Missed You' in large font, and asked them to call a local phone number.

"Saying that they were looking to deliver a package and they had missed us," Wiest said.

Luckily, neither homeowner called the number. Instead, they read the note thoroughly and dissected the information on the back of the paper. That fine print states that by calling the number and typing in a confirmation ID, homeowners consent to giving up their personal identifiable information - letting companies inundate them with marketing on their cell phone.

The business who left the "free" welcome gift is an Arizona-based company called nuCards, also known as nuHome Promotions.

"I thought they were being pretty tricky and deceptive," Wiest said.

The homeowners aren't alone in that: KTVB called every local business that had a gift card in the box, including Safe Home Lock & Key, Treasure Valley Window Treatments and Aquatech of Idaho. Each described a negative experience with nuCards.

"Didn't get any feedback, nobody came around," Aquatech of Idaho owner Richie Thompson said.

Business owners like Thompson say they paid $250 for a two-month trial thinking it would be a win-win for everyone involved. But when you call the 208 phone number listed on each gift card, you get nuCards' activation line, not the local company.

"[I] thought it'd be a great opportunity. But when you're not seeing that many people, you're not really getting a bang for the money they were trying to get us for to commit for one year," Thompson added.

He canceled his trial with nuCards in November, but he's gotten numerous phone calls from the company telling him to pay up for services.

"Up until these last two weeks when I actually threatened with legal counsel, they wouldn't quit harassing me, trying to get me to pay for something I canceled."

7 Investigates called the number that the Better Business Bureau had for nuHome Promotions and identified they were with KTVB. The company never returned their call.

While some may find nuHome Promotions' practices misleading, the BBB says they are legal. However, KTVB found other housewarming "gifts" that are flat-out scams.

For weeks, the di Donatos were getting letters in the mail from an agency posing as their mortgage company. The letters said their loan was no longer valid, they had no insurance and their house was in danger.

"We just bought a home, we're first-time homebuyers. And we're like, did we do something wrong?" di Donato told KTVB.

The company was asking them to send bank statements and other personal information. They researched it right away and found that nothing they were receiving in the mail matched anything from their actual mortgage company.

Which is the case with any scam or so-called "gift".

"Read the fine print, know exactly what you're getting into," Dixon added.

When you move or buy a home, it's important to know marketing companies can get ahold of your information through a publicly accessible database. That's why the BBB says homeowners should be wary of discounts or offers that look too good to be true. They say you should always work directly with businesses to get a deal and you should not have to go through third parties, enter access codes and give up your personal information.

"The intent is not to help out. It's more like to take advantage of you," Pap said. "Too good to be true."