IDOC is sending prisoners out of state to make room - and they're also holding them in county jails. The issue is especially evident here in the Treasure Valley, and as 7 Investigates discovered, county taxpayers are footing the bill for state inmates. 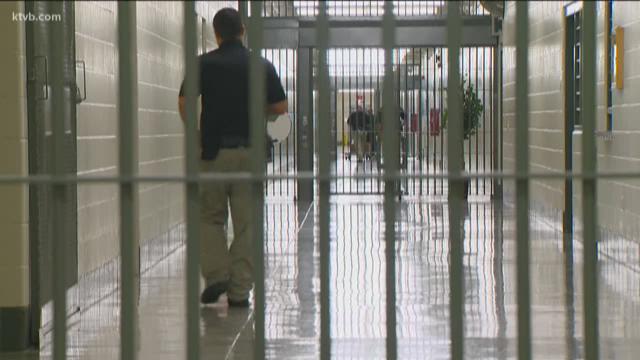 TREASURE VALLEY -- Idaho prisons are bursting at the seams, filled with a lot of people who have been there before.

KTVB reported earlier this month the Idaho Department of Correction (IDOC) is sending prisoners out of state to make room. We found out they're also holding them in county jails, leading to overcrowding problems. The issue is especially evident here in the Treasure Valley, and as 7 Investigates discovered, county taxpayers are footing the bill for state inmates.

Some are blaming the problem on criminal justice reform legislation that Idaho adopted in 2014, nationally known as the Justice Reinvestment Initiative. Its mission is to help curb the state's corrections costs, make sure the right people are in prison and re-invest saved money in improved public safety efforts,

An Idaho Department of Correction report from 2017 says the Council of State Governments estimated the state could avoid spending up to $150 million by reducing the prison population and not building a new prison. However, some law enforcement says part of those averted costs are going on the backs of county taxpayers, as more and more state prisoners fill up much-needed jail bunks.

"The Department of Correction has to take custody of their inmates. Whether that is building more facilities, whether that is determining how to get people not to commit crimes and recidivate when they're on a parole violation," Ada County Jail Administrator, Chief Deputy Scott Johnson, said.

As you walk up and down rows of bunks and lines of cells in every prison in Idaho, almost every bed is full. This state prison overcrowding phenomenon is leading to county jails overflowing.

"We don't have enough beds for ourselves and yet we're competing with the state when we go try to rent bed space from another county," Canyon County Sheriff Kieran Donahue said.

Every day, state prisoners are put in county facilities.

"They're backlogged in our jail," Johnson added. "The county tax bill is going up."

The two largest jails are right here in the Treasure Valley; as state inmates are passed on to Ada and Canyon counties local sheriffs' offices say the costs and burdens go on the backs of county taxpayers.

"This is not fair to the county taxpayers," Donahue added.

Sheriffs say many of those IDOC inmates are in jail waiting to get assigned to a prison and most are there because they violated their parole and can't bond out.

Prisoners can be in the county's custody for six to eight weeks, sheriffs' offices say, awaiting a parole hearing or judgment of a new crime. Johnson says that time period seems to be extending.

Idaho law requires the department of correction pay counties $45 a day to house each of their inmates, even though it costs around $80 a day to keep them in the Canyon County jail and about $96 a day per inmate in Ada County.

"We're going to get these people out of prison and sorry county, you're going to flip the bill for that. Well that's not right," Donahue said.

As of early January, state inmates made up about 20 percent of Ada and Canyon counties' jail populations.

"Over the last few years the percentage of parole violators coming back to the jail is greater than it's ever been," Johnson told 7 Investigates.

But what can it be attributed to? Law enforcement says it's a number of things: the exponential growth the Gem State has seen, crime rates trending upward with population, and felony convictions on the rise. Some local law enforcement argue it's also because of the Justice Reinvestment Initiative.

"Part of it - I can't say all of it - is because of JRI. Because our county population is growing significantly also," Canyon County Jail Administrator Captain Daren Ward said. "It's a dismal failure. It's just not working."

"It's not a great system. It's a great idea. Theoretically," Donahue added.

"I don't think we have enough information to say that [more prisoners are landing in jails]. I know that's a perception. But the reality of it is the people who came back in since JRI was implemented would have been arrested for parole violations for the same behaviors prior to JRI," Jones told 7 Investigates.

Passed unanimously in both the House and the Senate and signed into law in 2014 by Governor Otter, JRI's ultimate goals are to reform our criminal justice system, avoid building a new prison and decrease the number of people who re-offend, known as recidivism.

"For Idaho we looked at, specifically, what's the back end of the criminal justice system, so the prisons and parole process in terms of how we can make best use of the prison space we have," Jones said. "Make sure we are following best practices as a system that we know will help us with recidivism at the end of the day. The right people in custody and the right people out on supervision."

Jones says the state has an ethical obligation to make sure they are not putting people in prison who don't necessarily need to be in prison. She says that prompts the Parole Commission to take a close look at what people are doing to violate parole and what the best option to deal with it is.

"It's a little bit early to say if they've been successful or not," Idaho Department of Correction Director Henry Atencio added.

Before enacting JRI, the Council for State Governments did a study revealing Idaho had high recidivism rates and inefficient prison bed use. Today, the state is focusing on reserving prison beds for the most dangerous offenders, tracking effectiveness of IDOC in-house programs and improving probation and parole supervision.

"From that report we launched what we call our justice program assessment, really to introduce new programming into our system in our prisons," Atencio said. "A better informed process and better trained [parole] officer just aid in a better system at the end of the day."

Atencio says there are signs JRI has helped and a 2017 impact report showed the number of inmates physically in IDOC facilities is down. But it's not enough to ease overcrowding.

"It's kind of hard to say that it has or it hasn't reduced overcrowding. Certainly our county jails are overcrowded too. The department of correction is feeling that same crunch as well. That's why we're looking to move inmates out of state. I don't think you can point to justice reinvestment... as the primary causal factor of overcrowding in Idaho," Atencio told 7 Investigates.

Lower risk offenders serving past their fixed term have dropped off slightly and the percentage of parole violators coming back to prison is flat - which some at the county level would argue is because they're behind bars in county jails. Since JRI went into effect, data shows more people are being let out of prison and put on parole. So if they re-offend, as mentioned, they often land back behind bars in county jails.

"We have state inmates that are in the jail longer than they should be," Johnson added.

But IDOC and the Parole Commission don't believe JRI is a negative thing in Idaho.

"When I talk to a sheriff they attribute the overcrowding to justice reinvestment. And - maybe along the questions of what you're asking - maybe the expectation is that it would reduce prison bed space. You know, that hasn't happened."

"It's very well-intended. I get it, let's get people out of prisons and back into being productive members of society," Donahue said, "Let's address their social issues. We skipped a major point. At least in this state."

Criminal justice experts and Idaho Department of Correction state there needs to be a stronger emphasis on helping offenders heading back into the community. Once they're out, support, treatment and programs are crucial to make sure offenders don't land behind bars again.

"With good data for a couple years we'll have a better idea of what the impact has been in terms of recidivism," Jones said.

The state made major changes to JRI over the last couple years, but correctional leaders say they would really like to focus reform more on the front end of the system and sentencing. The Council of State Governments says more attention needs to be on community substance abuse treatment to help reduce the number of offenders returning to custody.

Meanwhile, both Ada and Canyon counties say they're desperate for more room; Ada is calling for an add-on to their jail while Canyon County is fighting for a whole new facility.