As the population grows, so does the need for more low-rent housing options and it's leaving thousands of families in need, and more on the verge of homelessness. 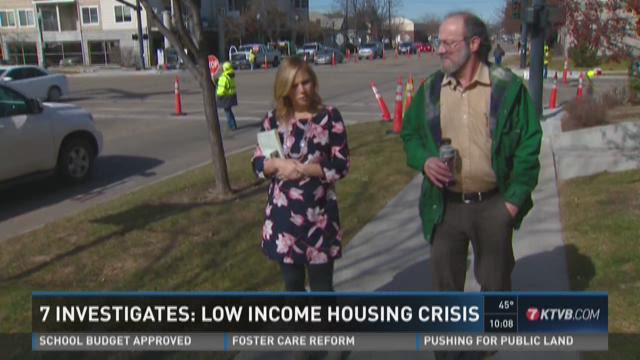 BOISE - It's easy to see the development going up around Boise as the city continues to boom.

Apartments, condos, and homes being built all across the area, mostly for those in the middle class.

But as the population grows, so does the need for more low-rent housing options and it's leaving thousands of families in need, and more on the verge of homelessness.

Richard Morgan has been walking Boise's sidewalks for decades. But for the past six years, he's been living on the streets as well.

"Lack of housing period. Yeah, it just... comes down to a choke point," said Morgan.

Morgan is one of thousands who qualified for rental assistance from the federal government, but even though he had a voucher, he couldn't find a place to use it.

"I had a transitional voucher through the home program last May and I looked for three months, I had friends case workers everything, couldn't find it, so this is my second voucher," said Morgan.

He still checks the online database of affordable homes at housing idaho.com often - but says almost all the units have long waiting lists. It leaves hundreds vying for any vacancy.

"I don't want to see anybody else have to deal with what I've dealt with for the last six years," said Morgan.

The Idaho Housing and Finance Association says as of this month, there were 5,812 units listed on housingidaho.com, with only 103 available.

Realtor Sheila Smith says she sees the crunch every day and says it's directly related to the housing market.

She showed us a small home on the Bench that used to be a low-income rental. It recently sold for well over asking price.

"So you're seeing a little house like this that would have been a great rental, people are now able to fix this up and sell it kind of for top dollar," said Smith.

She explained that with the market rebound and very low interest rates, more people are now able to buy - leaving less homes up for rent.

"I really see so many people struggling to find a place that are renting," said Smith.

She says the answer to more low-income housing is for more landlords to offer less expensive rentals.

The city of Boise says it's a far-reaching problem, with 35 percent of Boise residents qualifying for some type of affordable housing.

The term affordable can mean something different to everyone, but the city of Boise defines it as a family or individual paying no more than 30 percent of their income on housing costs.

For perspective, someone making minimum wage would bringing about $15,000 a year. That would mean if they pay more than $375 a month in rent, they qualify for affordable housing.

But, calculating exactly how many affordable housing units the city has, and how many more we may need, is difficult. Affordable housing can include private and public developments receiving tax credits to offer low-income rent, along with the homes operated by government agencies and those run by non-profits. There are also fair market homes, that happen to offer rent that falls in the category of affordable.

Right now, the city of Boise operates 300 units and the Boise Ada County Housing Authority runs 436 units. All are full.

The city recently released a study on the issue. It estimated there are a total of more than 32,000 affordable housing units across the city.

"For those who are categorized as extremely low income or very low income, we have a deficit in our community of affordable housing," said city of Boise Spokeserpson Mike Journee.

Journee says that deficit is more than 8,095 units.

But, he says there's a surplus of 11,285 units in the low income category.

Journee says the answer lies in a service minded approach.

Currently, he says Boise spends $4.5 million in local and federal funds on affordable housing each year.

But, they're now dedicating $1 million to their new campaign called Housing First.

It includes a new single multi-family facility along with more scattered homes throughout the city.

"Housing First is a strategy to put someone who is chronically homeless into a stable housing situation and then provide wrap-around services such as mental health counseling, substance abuse treatment, financial counseling," said Journee.

Journee says the city has been focused on fixing the problem for years, and held housing and homeless roundtables last fall to find better solutions. He says they're now focused on three things: permanent housing for the homeless, rapid re-housing for families, and creating more affordable housing.

"Affordable housing is something we've been focused on for quite a while and it's something we work on through the development practices that we encourage, through incentives that we create." said Journee.

The Boise Ada County Housing Authority says the problem goes beyond the shortfall in the number of affordable homes, but involves a shortfall in funding as well.

"There is not enough funding in our community to support the need," said. Jillian Patterson.

The Housing Authority administers $12 million for rental assistance for 2,200 families, but Patterson says the need is much greater.

"I think it's extremely frustrating for the family they have someone to support them, provide a subsidy, on their behalf yet they can't utilize it," said Patterson.

Patterson supports the city's idea, but says it isn't enough. She says a drop in federal funding is also to blame, along with a lack of state funding.

Peg Richards is also worried about the crisis, but says the focus needs to be on community driven answers.

Richards also says the problem lies in the process and believes agencies need to communicate better.

"That's part of the problem in finding housing because the bureaucracy makes it impossible, who jumps through all the hoops? And why are there hoops we have to jump through to find housing for everybody in the city?" said Richards.

She runs the Good Samaritan Home, a non-profit modeled after a boarding home, that's almost always full. She sees the desperate need of those without a home every day.

"You have to be absolutely not only frustrated but scared to death, scared," said Richards.

Richards says she's glad the city is stepping up but believes it's too little too late.

"It's the first time they're actually really made an acknowledgement that this is really a problem," said Richards. "That's really really a sad thing when you have a community of 300,000 people and you have people who have given up because nobody cares, and that's where we're at."

The fear amongst many is that our current crisis will only get worse...

"What I see is a new generation of kids out there becoming homeless and that's what scares me," said Morgan.