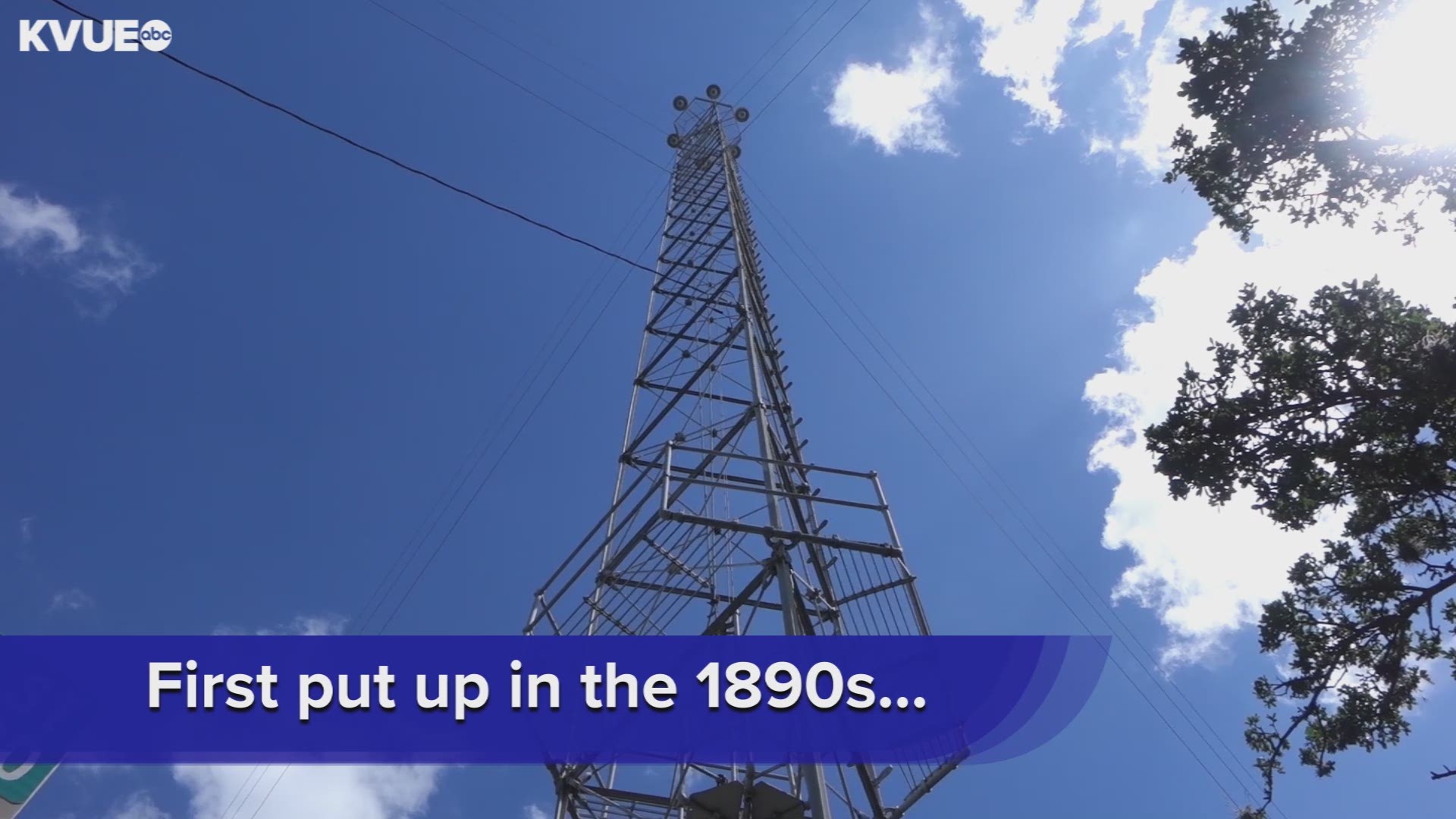 Once a popular street lighting system for U.S. and European cities in the late 19th Century, the towers were not unique to Austin.

But as more efficient electric lighting systems came into use around the world, cities like Detroit and New Orleans tore their towers down by the early 20th Century. Austin kept its 165-foot towers.

Austin is now the only city in the world with moonlight towers, with 13 of the original 31 still standing and another four currently being restored.

Unlike an old building or an old streetcar, the moon towers are a rare example of something still functioning but essentially serving no purpose – the technology was already becoming obsolete a century ago as light posts were built and city skylines grew, obstructing the light cast by the towers.

As Austin undergoes massive growth, it’s a special thing for something from the past to remain, especially when it’s not needed.

The lights have gone from carbon arc lamps to incandescent to LED and are no longer nearly as bright as they once were, but they still switch on every night.

The first tower went up in Austin’s Hyde Park in 1894, almost a full year before the rest of the towers.

“It was designed and constructed by a gentleman named Col. [Monroe] Shipe, and he was this Barnum-type character who was really flamboyant and self-promoting and did all kinds of things to drive interest and development in his real estate, Hyde Park,” said Heckaman.

“He had the first moon tower constructed there [Hyde Park] and he produced the power from his own powerhouse as opposed to waiting for the completion of the [Austin Dam] and the powerhouse there,” he said.

That tower is still standing at the corner of 41st Street and Speedway.

Editor's note: The tower shown on this map at West 22nd Street and Nueces has since been cleared to make way for construction. The Leland Street and Eastside Drive tower was removed in September 2019 for restoration and will be put back up near the end of January 2020.

The story behind the towers’ origins

Before the construction of the moon towers, the city of Austin was shaken by a string of brutal axe murders.

The perpetrator, nicknamed “The Servant Girl Annihilator,” was never identified or captured, leading to plenty of theories, including that the killer was the same man dubbed “Jack the Ripper” in London.

The murders are frequently referenced as the reason for the moon towers, but the last murder happened around 10 years before the towers were lit.

“There’s no documentation to really demonstrate that it was really taken into consideration by city leaders and planners,” said Heckaman. “It’s reasonable to assume that they wanted to provide lighting to the city for safety, but it wasn’t a leading part of the decision process.”

Heckaman said the biggest factor behind the towers was the construction of the Austin Dam, which stood at the site of today’s Tom Miller Dam before a catastrophic failure in 1900 that killed dozens of people.

While Austin’s moon towers look similar to ones erected in Detroit around the same time period, Heckaman said the towers were bought new from the Fort Wayne Electric Company, not secondhand.

“The Austin towers used the advantage of the Detroit towers, which was a small footprint, and then it also uses that star design with the iron,” he said.

The star design improved on the Detroit towers and allowed all the surfaces of the metal to be coated to prevent rust – one of the reasons the towers have lasted as long as they have.

Over the years, several of the moon towers fell victim to development, crashes or weather events.

But the remaining 17 were added to the National Register of Historic Places in 1976, ensuring their survival for decades to come.

In 1993, the towers underwent a massive restoration as part of a special project that was completed in 1995. Each tower was disassembled, inspected, coated, sealed and reinforced – an effort that would extend the life of the lights for another 50 to 75 years.

Then again in 2016, Austin Energy hired a contractor to restore the towers, working on around three to five towers each year.

Of the 17 left, only 13 are standing around the city. The Leland Street and Eastside Drive tower was removed in September 2019 for restoration and will be put back up in its location near the end of January 2020. The other three are being restored but cannot go back to their original locations because of development – it’s not clear whether they will be erected elsewhere.

As the holiday season approaches, the most famous Austin moon tower will get its annual make-over when the Zilker Park tower transforms into a holiday tree for the Trail of Lights.

So next time you’re around one of these historic structures, look up!