A Post Falls man required open heart surgery and has racked up hundreds of thousands of dollars in medical bills after being bit by a rat at work. 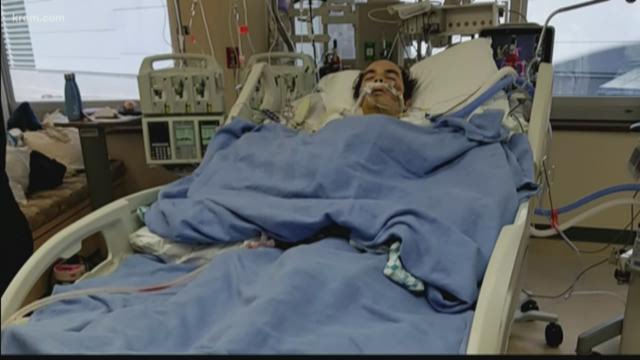 POST FALLS, Idaho — A Post Falls man is recovering after contracting a serious disease from a rat bite.

The man, Eric Lundholm, was bit in July while working for a rodent breeder in Post Falls. The disease, which is called “rat bite fever,” can be fatal if not treated, according to the Centers for Disease Control and Prevention.

"Certainly did not expect such a small rodent to cause such a big deal for me,” said Lundholm on Monday at his parent’s home in Post Falls.

Lundholm said the bite occurred while doing routine work for Butter Ball Rodents on July 5. After noticing a rat that had escaped from its enclosure, Lundholm went to pick up the animal.

"It crawled up its own tail, just grabbed on, then came up and bit my own thumb when I wasn't looking at it," he said.

The bite at the time appeared to be deep.

According to their website, Butter Ball Rodents produces live mice and rats that are then sold as a food source for other animals.

“Our facility is based in the Pacific Northwest and provides feeders to birds of prey, reptile, and aquatic and carnivore communities all across the U.S,” reads a description on the company’s website.

While Lundholm said he was initially concerned about the rat bite, it wasn’t until nearly a week later when he started to experience “extreme flu” symptoms.

Lundholm said, based on the lack of some symptoms associated with the flu, he started to think that the rite bite may be to blame.

"I was kind of like, this isn't the flu. This is something else," he said.

The illness then subsided. A couple of weeks later, however, it came roaring back.

"The rigors, the extreme chills, the shaking just really hit. And that's when it became really severe. I was just stuck in bed,” he said.

As the sickness lingered, Lundholm was eventually admitted to Kootenai Health. While there, his fever hit 104 degrees and his heart rate increased.

Lundholm said doctors told him "You could go into heart failure at any moment right now.”

Doctors would subsequently perform open heart surgery on Lundholm to repair serious heart damage, he said. At the time, doctors weren’t entirely sure what was causing the illness, much to Lundholm’s frustration.

A piece of heart tissue removed during surgery was eventually sent to the University of Washington, where experts confirmed that Lundholm was suffering from rat bite fever.

Lundholm said he’ll now be required to use blood thinners for the rest of his life due to the surgery. Currently, he’s missing work and can’t lift more than five pounds.

According to Lundholm, it could take up to a year before his health is back to normal.

"I never would have really expected it," he said. He is also avid musician and wasn't able to play his guitar.

Lundholm added that he and his family are considering pursuing legal action against Butter Ball’s owner because of the bite. They’re also pursuing a worker’s compensation claim through the state of Idaho.

A voicemail and an email sent to Butter Ball seeking comment weren’t returned on Monday.