Thousands to 'Light the Night' in Boise Thursday

They will be marching to the Idaho Capitol to raise money to fight cancer. 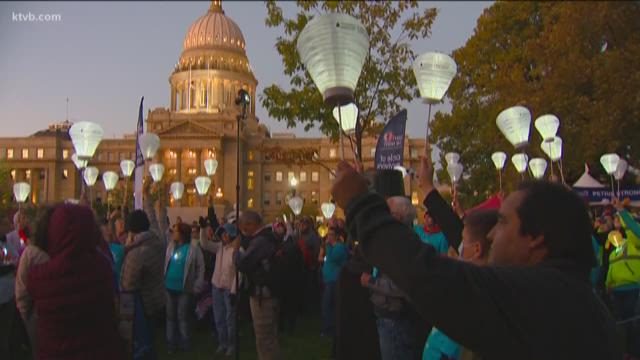 BOISE, Idaho — Bringing light to the darkness of cancer.

Thousands of people will do just that on Thursday in front of the Idaho Capitol building in downtown Boise. The event will include a walk and a fireworks show, with festivities getting underway at 7 p.m.

This is the 19th year for "Light the Night," put on by the Leukemia and Lymphoma Society.

It's an important cause, helping many people right here in our community.

Petrie has been taking part in the “Light the Night” walk in Boise since 2015 when her husband, Steve, was diagnosed with blood cancer.

He left behind not only Dana, but their son and daughter and many other family members and friends.

"This will be our fourth year without him," Petrie said.

Steve is still such a huge part of the reason she's involved with the Leukemia and Lymphoma society.

"It has become more than that, I have many friends and family members who are diagnosed with blood cancers," she said.

And she says they have all received a lot of support from the Leukemia and Lymphoma Society.

Much of the money the nonprofit raises is through “Light the Night.”

So Petrie says she will always be "all in."

"I don't know what we would have done without them. I mean the research and treatments that the LLS funds is phenomenal," she said. "It is saving so many lives and it's bringing such better treatment to families and patients, and so that's why we do this. We go out, we raise money and we do what we can to bring funds in to families to continue the education and the research and support to families that it brings."

So this year, as the “Petrie Strong" team light their yellow memorial lanterns and red supporter lanterns, it gives them some peace knowing a lot is being done to create more white ones. Those are for the fighters, and survivors.