Idaho's COVID-19 Vaccine Advisory Committee voted to approve a plan that would allow all Idahoans age 16-44 to be eligible for vaccination by the end of April. 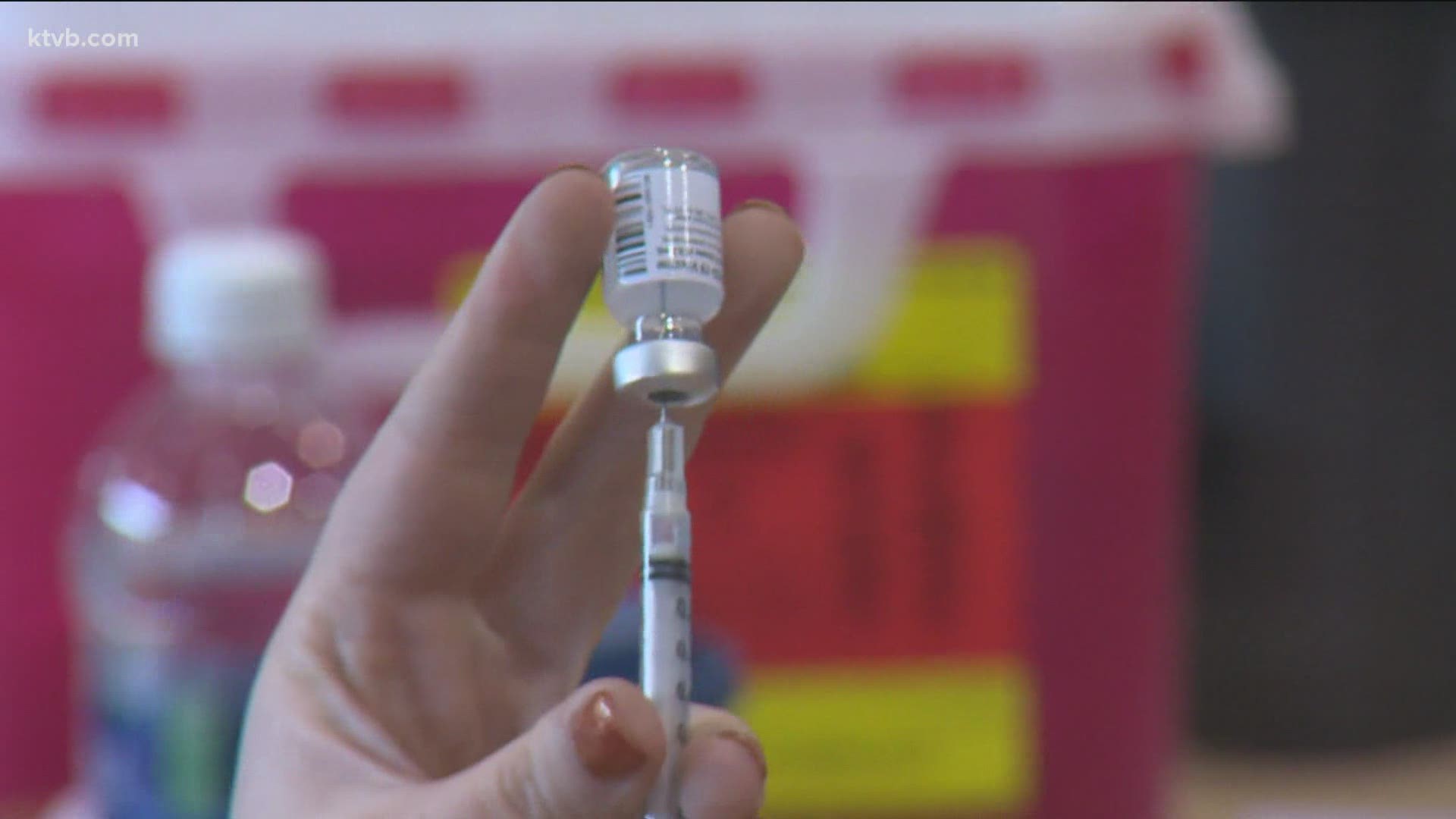 BOISE, Idaho — The Idaho Dept. of Health and Welfare (IDHW) held a press briefing to provide an update on the state's COVID-19 vaccine rollout.

This means as many as 200,000 Idahoans could become eligible to be vaccinated every two weeks moving forward, according to IDHW Director Dave Jeppesen.

The committee voted to approve the plan on Monday, with Idaho Gov. Brad Little approving the recommendation on Tuesday.

Rather than basing eligibility on occupation, Group 3 is now based on age and pre-existing conditions. As of Monday, Idahoans age 55-64 with at least one underlying health condition are eligible to receive the vaccine. That group will be given priority for one week, at which point all Idahoans age 55-64 in the general population will become eligible.

After those two weeks, Idahoans age 45-54 will become eligible and given priority for two weeks, giving priority to those in that age group with underlying health conditions.

"This means that before May 1, all Idahoans will be eligible for vaccines," she said. "We're very excited about this opportunity."

It is important to note that only the Pfizer vaccine has been approved for individuals between the age of 16 and 17.

In the event that the parent of a 16 to 17-year-old does not want their child to receive the vaccine, but the child does, a discussion will need to be had between the patient and provider, according to Idaho Immunization Program Manager Sarah Leeds.

During a meeting on March 2, Jeppesen announced Idahoans in subgroup 2.3, which includes frontline and other essential workers, would become eligible to receive the COVID-19 vaccine beginning March 15, meaning as many as 134,000 Idahoans are now eligible.

The vote comes as numerous vaccine providers and local entities have begun putting Idahoans on "no-waste" waitlists. These lists were provided to ensure unused doses of the COVID-19 vaccine did not go to waste, as the shelf life of these vaccines is relatively short.

"We want to make sure that there isn’t any waste of the vaccine," Shaw-Tulloch said. "So we’re happy that providers are having those lists available."

Some providers may have extra doses of the vaccine, but one provider's vaccine supply is not reflective of all providers in the state, according to Jeppesen.

The state’s provider transparency data shows pharmacies like Albertsons and Walmart have not been administering as many doses of the vaccine as other providers.

Those pharmacies get their vaccine at the federal level, where the state has little to no control.

“There is less control about moving it away from their corporation and stores to, say, a private provider and moving it to a hospital," Leeds said. “It is an ongoing conversation that we have with both weekly meetings with the CDC, and we have good communication with each of those corporations and their representatives and can talk through challenges.”

However, the department can work with the providers to help get the word out that Idahoans can get the vaccine at that location, and if there are appointments available.

“We have had situations where we’ve been working with [providers] when they might have more vaccine available than they have appointments available,” Shaw-Tulloch said. “Instead of redirecting, so far, we’ve been able to do some pushes through the local health district and through social media to get those vaccine appointments filled.”

While the state of Idaho is now opening up appointments to adults in the 55-64 age range with one of those conditions, some providers do not verify that the patients have one or more of them.

There is no requirement to provide documentation to prove the patient has an underlying condition, according to IDHW. Instead, eligibility determination will be based on the honor's system.