As the number of confirmed coronavirus cases continues to rise across Idaho, more cases are popping up in jails and prisons. 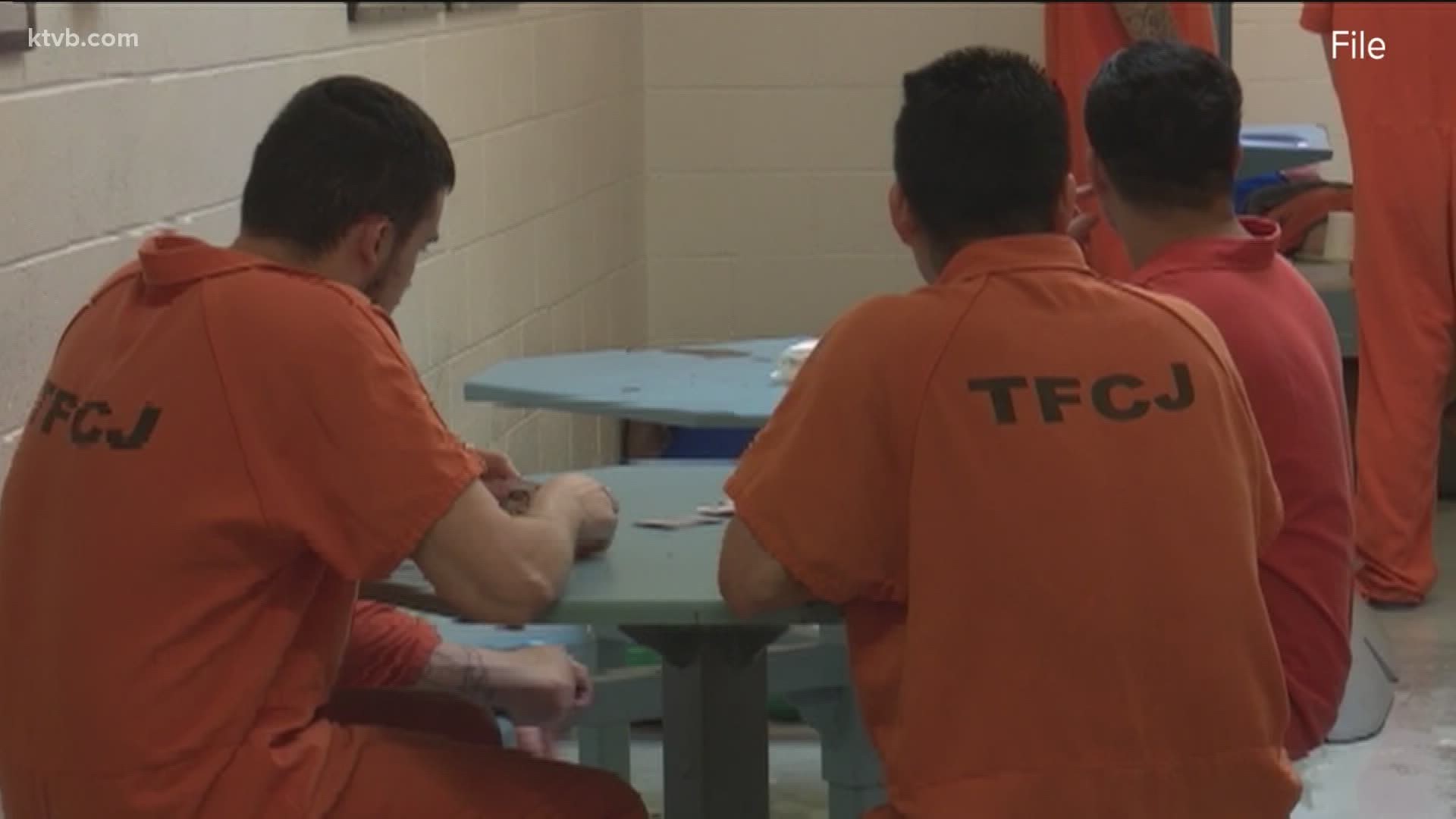 TWIN FALLS, Idaho — Update: As of Thursday, Aug. 6, the jail had 183 total confirmed cases. No additional staff members have tested positive since the end of July. Five tests are still pending and 51 inmates refused to take a COVID-19 test.

Update: By Tuesday, July 28, the number of confirmed cases at the jail had increased to 123 inmates and eight staff members. Officials are still waiting on 80 additional tests to come back.

As the number of confirmed coronavirus cases continues to rise across Idaho, more cases are popping up in jails and prisons.

Between Monday and Wednesday, every inmate and staff member at the jail was tested, totaling 300 tests.

Results aren't yet back on the remaining 254 tests but Carter said he hopes to have at least some of the results back on Friday. He expects a lot more confirmed cases when that happens.

“I really have no reason to believe I won’t have more," Carter said. "It just stands to reason if I’ve got that many in there now with that amount of testing, that there’s probably going to be more.”

The 25 inmates who have tested positive so far are all general population inmates. According to Carter, all of them are symptomatic and are being kept together in their own cell block.

So far, no staff members at the jail have tested positive.

"If there is a silver lining here, that'd be it," Carter said.

The sheriff said about a week ago, one inmate did start showing symptoms and was taken to the doctor; he later tested positive for the virus.

Those results came back July 16 and the sheriff immediately ordered all inmates and staff tested.

That first inmate who tested positive has been in the jail since May. He is currently in isolation.

“We’re doing the cleaning, we’re doing everything we can do at this point to contain this problem," Carter said.

Each inmate and staff member is wearing a mask. For the past several months, the jail has also allowed only video visitation, no in-person visits. That will continue, Carter said.

Even in an ideal setting, separating inmates is hard. Currently, the Twin Falls County Jail, like many others in Idaho, is dealing with overcrowding.

RELATED: Viewpoint: IDOC plans to send more than 1,000 inmates to out of state prisons to address overcrowding

Overcrowding adds to the dilemma of how to contain the virus if inmates continue testing positive.

"I can’t tell you exactly what will happen because we have to devise that plan," Carter said. “When we get all of our numbers, my jail commander, myself, my senior staff, probably the county commissioners and head law enforcement officials around here will meet and devise a plan."

In all his years in law enforcement, dealing with COVID-19 is one of the toughest challenges he's ever faced.

“This is incredibly challenging," he said. "I’ve been in this business since 1980 when I graduated POST and law enforcement is way different now than it was when I got in this business. There are certain things now you’ve never heard of and never dreamed of and this is one of them. This has taken all of us by storm.”

It's not just local jails facing an outbreak of COVID-19. The Idaho Department of Corrections is also seeing an increase in cases.

As of Thursday, 1,881 IDOC inmates have been tested across all of its facilities. Of those, 738 have tested positive and 143 are still pending. So far, 37 IDOC staff members have also tested positive for coronavirus.

RELATED: Over 70% of tested inmates in federal prisons have COVID-19