From the St. Paul Rodeo to Pendleton Round-Up, big Oregon events are tentatively moving ahead for summer 2021. Others are canceled again during COVID uncertainty. 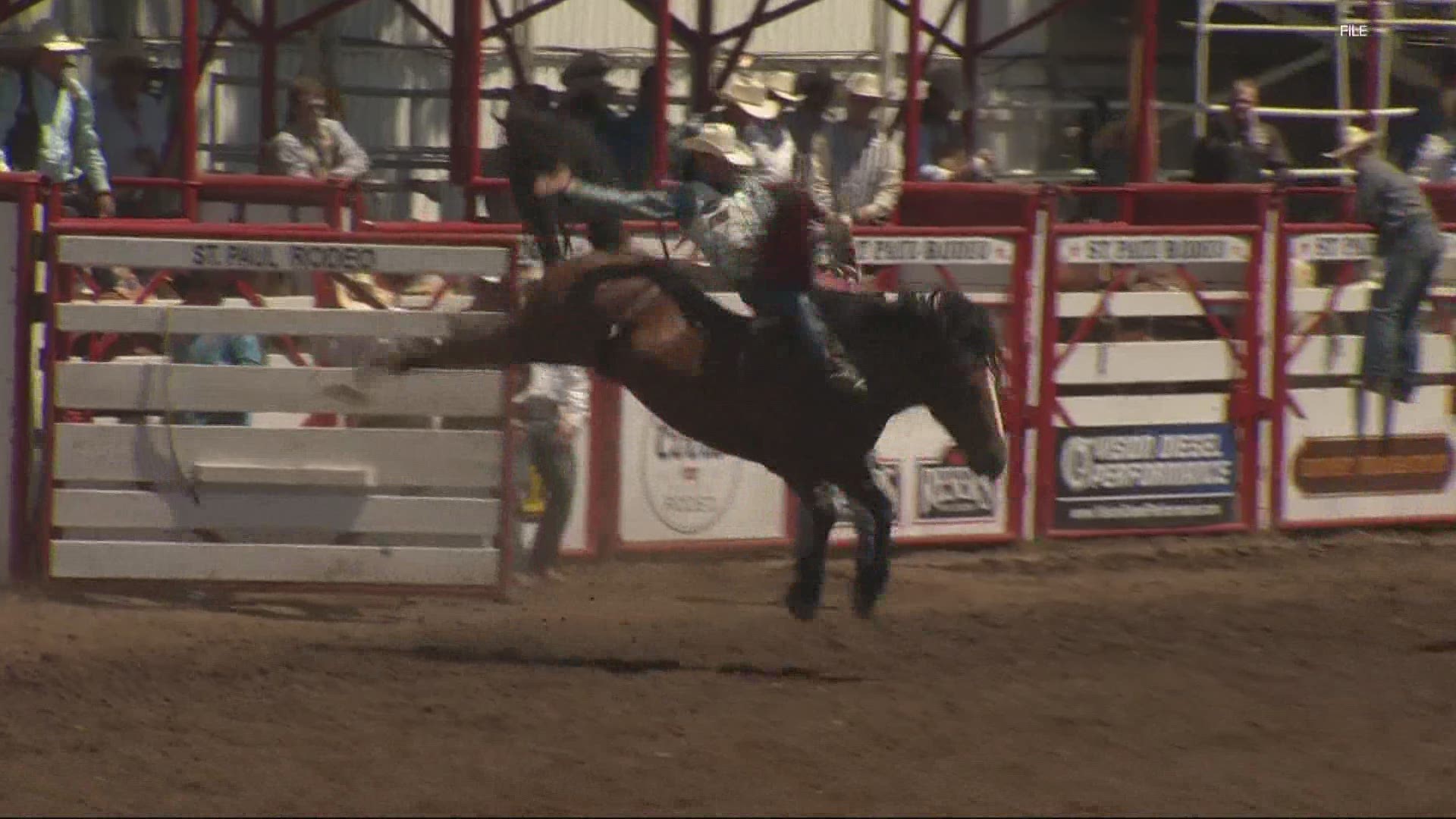 OREGON, USA — Many of Oregon's famous summer rodeos and festivals are at a crossroads in 2021, as organizers work to predict COVID restrictions and risk levels ahead.

One event that is scheduled to happen is the St. Paul Rodeo in Marion County.

"We are all in," said general manager Cindy Schonholtz.

The rodeo is a big deal for St. Paul, which has a population of about 500 people. The rodeo and carnival events drew in about 65,000 people in 2019, according to Schonholtz.

Organizers had to cancel the event last year because of the pandemic, resulting in huge economic losses for St. Paul and many surrounding communities that benefit from the tourism dollars.

This year, half of the St. Paul Rodeo's tickets are already sold. Sales are now paused as organizers assess COVID risk levels and wait for more guidance from state leaders. The rodeo has a green light for now, but organizers have not decided on several other coinciding events, such as the carnival and parade.

"We're going to be nimble. That's our word," Schonholtz said.

The Pendleton Round-Up is another huge Oregon event that had to cancel in 2020 due to COVID concerns. It normally draws more than 50,000 people.

Gov. Kate Brown hinted last week the Round-Up may be able to come back this year as restrictions ease.

"I would fully expect that we will be able to Let'er Buck, so to speak, in September," Gov. Brown said.

State leaders will use a number of metrics to decide if counties can host such large events. Those include numbers of COVID cases, deaths and vaccination rates.

Pendleton sits in Umatilla County, which as of Monday, has one of Oregon's lowest vaccination rates of around 25%, compared to nearly 50% statewide.

The East Oregonian reports for now, the Round-up is working on a safety plan to present in summer, with the goal of a fully fledged event.

Other event organizers are canceling altogether for 2021, including the Molalla Buckeroo. On May 10, it posted on Facebook that it was canceling its summer rodeo event because of health concerns, risk levels and regulations.

It wrote in a statement:

As an association, we have to put the safety of our family (personnel, volunteers and patrons) at the forefront...This isn't the year any of us thought we'd be living, but as a society, we have through worse and will undoubtedly persevere and become stronger in spite of it all. The Molalla Buckeroo will do the same. We'll be back next year, ready to celebrate in epic proportions with you all once again.

KGW reached out to a media contact on the Molalla Buckeroo's website, but has not heard back.

The Portland Rose Festival made a similar choice earlier in the year. In February, it announced its largest summer events would be postponed until 2022.

Jeff Curtis, CEO of the festival, said even with regulations easing up and vaccinations rising, organizers for large events don't have enough time to pivot.

"It's not just something you can turn on like a switch and say, people are ready to come back," Curtis said.

He noted it takes six to twelve months to plan the Portland Rose Festival, which is the largest series of mass-gathering events in Oregon.

Curtis said the parades alone can draw between 250,000 to 400,000 people in one go. His team felt attempting a scaled-down approach during COVID wouldn't do the events justice.

"That pent up demand, we are excited to produce and bring back in 2022," Curtis said. "It will be Portland's largest family reunion."

Other smaller events from the Rose Festival are continuing, listed on its website.

Back in St. Paul, where the rodeo is on stand-by for this year, Schonholtz is excited to see tradition return.

"It's in their blood here," she said. "It's a favorite of people because they come back in time."