There are some people that believe the coronavirus is a hoax. Ryann Sharp works on the frontline and sees firsthand why kind of impact the virus is having on staff. 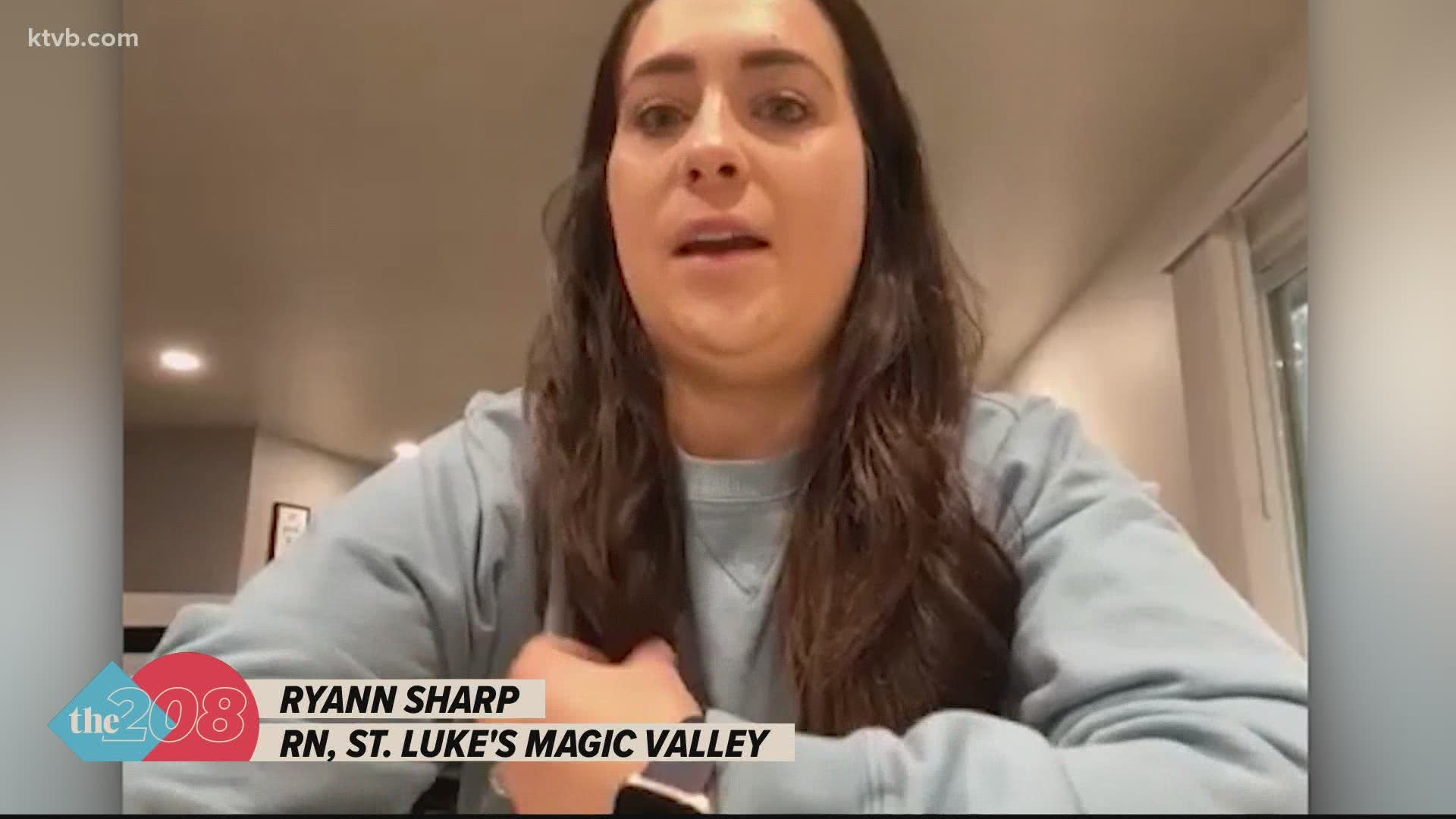 BOISE, Idaho — As of Wednesday, nearly 400 Idahoans are currently in the hospital battling COVID-19.

The beds and equipment are in short supply in Idaho hospitals. Healthcare facilities are facing a shortage of staff and the expertise needed to outfit the COVID-19 and intensive care units.

St. Luke's Magic Valley has been hit hard with this issue. With little space and minimal staff, patients have been sent to Boise hospitals.

Ryann Sharp works as a registered nurse at that Twin Falls hospital.

She has for the past two-and-a-half years.

She is what is known as a float nurse, meaning she works in whatever unit she is needed.

She told us all of them, hospital-wide are understaffed right now with almost all of the nurses having to pull extra shifts.

She also told us all of them have heard the comments from the public and social media.

The hospitals are lying. They are just making money off COVID cases.

Because while the hospital may not be overwhelmed right now, she and her colleagues are.

Sad, tired, frustrated and angry is how she started that post to defend the profession she chose as a little girl.

And despite the current conditions and desperation, it's still a job she loves.

"My favorite part is seeing people get better and go home, and that's not happening right now," Sharp said.

"From when you started there to not being able to send people home, how has that changed?" asked Brian Holmes.

"From March to now it's been rough, we don't see that as often and when we do we are all clapping and cheering and we're pretty excited, especially for the ones that have been there for a long time," she said.

"I can see that this is difficult for you, isn't it?" asked Brian.

That skepticism even extends to some patients who didn't believe COVID was a thing until it was a thing that sent them to the hospital.

"I have heard that, yep that they don't believe it until they are in that situation," she said.

"Then what do they say?" asked Brian.

"When they are there they are probably the most thankful patients that we've had, but they are also the most scared patients that we have and that's hard for us to see too, especially since their families can't be at the bedside right now, so we are the only faces they see, so they don't even really get to see us," she said.

"Is that the reason you wanted to post what you did on Facebook last week?" asked Brian.

"It is yeah, I needed to get my voice out there, and when it comes to your coworkers being the only people who understand you, but you know that your coworkers literally cannot take on any more than what they are dealing with, you can't vent to them anymore, you can't use them as an outlet like we used to, and when it's people that you're acquaintances with that are saying these things you try to get it out anyway that you can without burdening other people," Sharp said. "I wanted to let people know that we're still here and we are still fighting for people's lives every day."

"This third paragraph that you wrote - I'm not afraid anymore. I will show up every shift, work extra to help my coworkers and pray that there is an end near. I don't want to argue about masks anymore. I just hope that when the time comes that you need us, know that we'll be there. And we'll fight for you. Even when you're giving up on us.  Do you feel like you're being given up on?" asked Brian.

"I do, I feel like the community is giving up on us, I feel like, as a hospital standpoint we are stronger than ever, that sounds kind of cheesy," Sharp said. "But seriously. I have never been more supported from my job, but the community is, they are giving up on this, they just, it's whether it's a non-belief thing, whether it's not wanting to wear a mask thing, whether I don't know any more, COVID is still here, it didn't go away when the election happened and it's no going anywhere anytime soon."

"What is the state, you say in your post check on your friends in the medical field. Is there a concern on your part and even for yourself that this is taking its toll on you guys emotionally?" asked Brian.

"The loss, everytime we lose a patient to COVID, anytime we lose a patient in general right now because it's not what it used to be, there aren't family members at bedside," she said. "We kind of carry those and we have to kind of do it silently, we can't really burden our coworkers with any more than what we already are."

"That's a side of it that I didn't really, didn't really hit me until just now that because of the restrictions on visitation and stuff like that, sometimes you're the last human that these people connect with. That's a lot on you," Brian said.

"It has been yeah, or we're fighting to get that last Facetime set up with their before it happens, and it's hard," Sharp said.

"If there was one thing that you could change in all of this in the last eight months, what would that be?" asked Brian.

"Do you want my honest opinion?"

It wasn't to hire more nurses. It was more personal protection equipment. It wasn't even to wish to make people believe this is actually real. Ryann justs wants to care for people and help them get better. And right now that's being made difficult she says by a lack of compliance in the community to do all they can to stop the spread of coronavirus.

Today was her day off, and after getting as much rest as one can get with an 11-month-old in the house, Ryann will be back to work tomorrow and hopefully she'll be sending patients home better than they were when they came in.