The move to extreme risk bans indoor dining at restaurants and significantly reduces the number of people who can be inside a gym or indoor entertainment space. 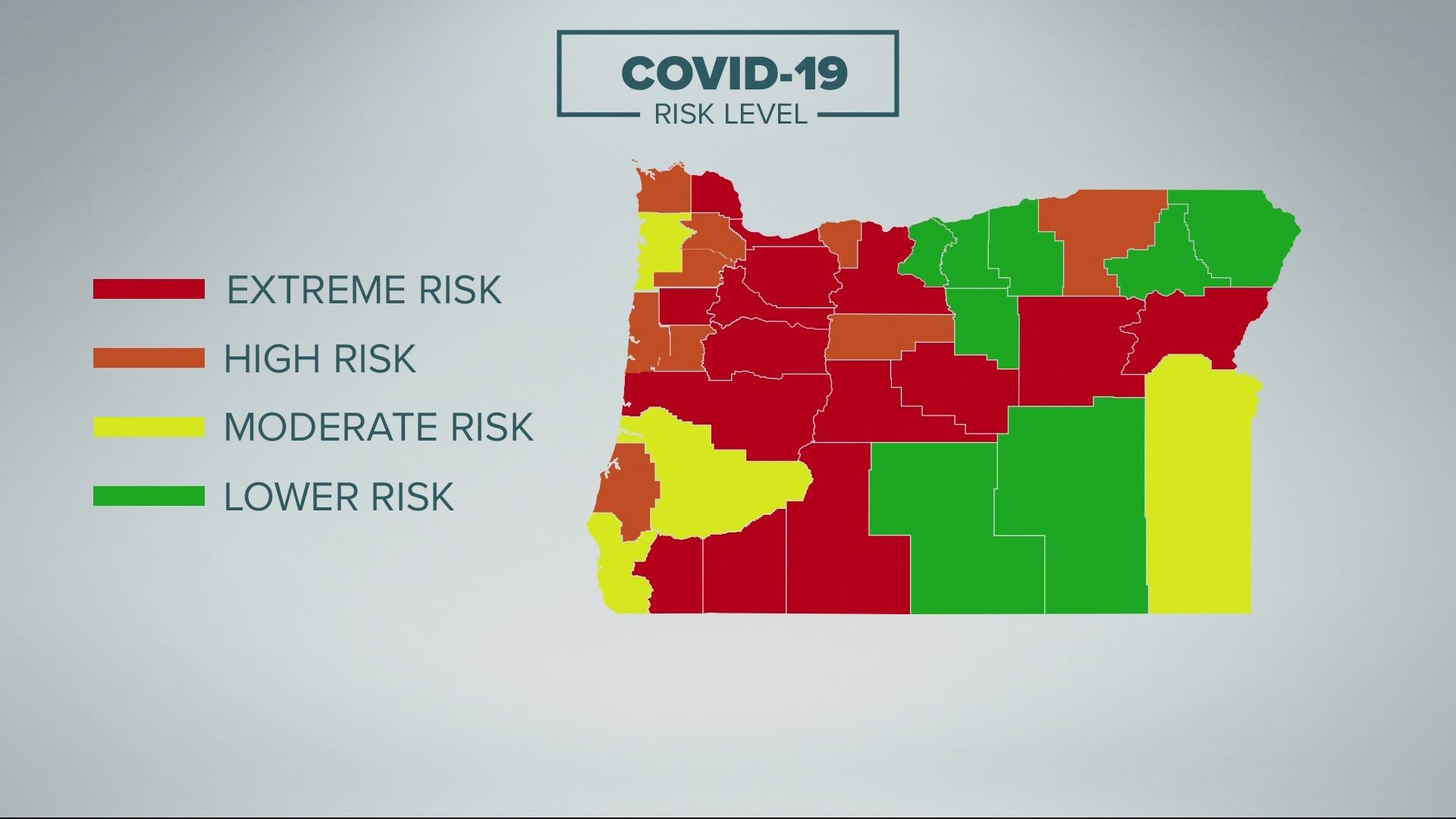 PORTLAND, Ore — Fifteen Oregon counties, including Multnomah and Clackamas, moved back into the extreme risk category on Friday.

The move to extreme risk bans indoor dining at restaurants and significantly reduces the number of people who can be inside a gym or indoor entertainment space. Oregon Gov. Kate Brown announced that outdoor capacity limits for bars, restaurants, and other sectors will be raised from 50 to 100 people in extreme risk counties, as long as health and safety measures, including physical distancing, are in place.

“If we don’t act now, doctors, nurses, hospitals, and other health care providers in Oregon will be stretched to their limits treating severe cases of COVID-19,” Brown said in a statement released Tuesday. “Today’s announcement will save lives and help stop COVID-19 hospitalizations from spiking even higher. With new COVID-19 variants widespread in so many of our communities, it will take all of us working together to bring this back under control.”

The updated risk levels will be in effect through May 6:

Counties moving to extreme risk will stay at that level for a maximum of three weeks and can move to a lower risk level if their case rates improve. Meanwhile, the governor's office announced that updated risk levels will be announced weekly for at least the next three weeks, "in an effort to speed up the return to normal business operations."

Brown said she is working with Oregon lawmakers on a $20-million emergency relief package for businesses hit hard by changing capacity limits in extreme risk counties.

Jason Brandt, president and CEO of the Oregon Restaurant and Lodging Association, told KGW that that banning indoor dining is unfair to restaurants in extreme risk counties.

"Make no mistake about it. We are being targeted when the data and the facts do not showcase significant spread in our environments," Brandt said.

Becky Hultberg, the president and CEO of the Oregon Association of Hospitals and Health Systems, said Portland-area hospitals are ready for a potential surge of patients.

"As the pandemic emerged last year, hospitals around the state set up a regional structure for collaboration to assist each other in managing capacity," Hultberg said. "We are working together, coordinating bed space, supplies, and essential services, just as we have successfully done many times on previous challenges like PPE and vaccinations."

Last week, Brown said the state will analyze data again to determine if certain counties need to return to the extreme risk category. Brown said if necessary, she would cancel the warning week and those counties would move into extreme risk starting Friday, April 30.

For any county to go into the extreme risk category, there have to be 300 people hospitalized in the state with COVID-19. There also must be a 15% increase in the seven-day hospitalization average over the past week.

When Oregon’s updated COVID risk levels were announced on April 20, 11 of the 23 high risk counties qualified to be at extreme risk. However, because the statewide hospitalization criteria for extreme risk had not been met, the counties remained at high risk.

During her press conference on April 23, Brown said Oregon can get to a place where most restrictions are lifted and the economy fully reopens no later than the end of June. "How quickly we get there is up to each and every one of us," Brown said.

RELATED: At least 12 Oregon counties could move back to extreme risk next week, Gov. Brown says

In counties with extreme risk, the following activities will be allowed, with health and safety protocols in place. For a complete list of rules for every risk category, see the Sector Risk Level Guidance Chart below:

Read the full list of rules for each risk category below:

Editor's note: An earlier version of this story said counties moving to extreme risk will stay at that level for a minimum of three weeks. We have corrected the error.